But as any scientist will tell you, an experiment that fails is as invaluable as one which comes off. As such, again, Seattle’s show is quite a success. We now have strong evidence that a number of plausible approaches to“fixing” B&B just don’t work.
The overarching problem with opÈra comique today, even in France, is its incorporation of substantial passages of spoken dialogue. The theater for which almost all the traditional Parisian opÈras comiques were written contained 1,100 seats. The newly-restored house, which opened in April 2017, only 100 more.
The Susan Brotman Auditorium of Seattle’s Marion McCaw Hall seats 2,900: more than 260% larger. A human voice, no matter how well-trained, cannot be understood from its stage without amplification. Even with amplification, the performers’ diction must be perfect to be comprehended, and the disproportion between great big voices and the tiny figures producing them creates a sense of eerie alienation rather than intimacy.
So: bottom line—B&B doesn’t fit this room and never will. But Seattle Opera’s production team couldn’t accept that. They wanted to do the show, period. And they convinced themselves that with enough tweaks and kludges it could be made to fit.
Tweak number one: the spoken dialogue is amplified, with just the effect it always has on the operatic stage: a clumsy jolt to the ear every time the music starts or stops.
Tweak number two: the opera is performed in English throughout, only the sung portion is supertitled, which only emphasizes how poorly one understands the dialogue when the mikes come back on.
Tweak number three: the perfectly serviceable dialogue Berlioz himself created to span the scenes between numbers with scraps of gen-yew-ine 100% Shakespeare, whose words can be hard to follow when spoken at speedby fine actors in an auditorium designed for spoken theater.
Not content with those additional challenges, they have restored scenes and characters cut by Berlioz, requiring an additional half-dozen speaking actors and 20 minutes more dialogue, most of it dry and expository. The only character Berlioz invented for his version, the tedious music master Somarone, is rendered somewhat less tiresome by giving him comic lines taken from Shakespeare’s constable Dogberry. To smooth the bits where the talk gets to be too much even for the innovators, they innovate some more, suturing in music from other Berlioz works including little tune-clips for underscoring. 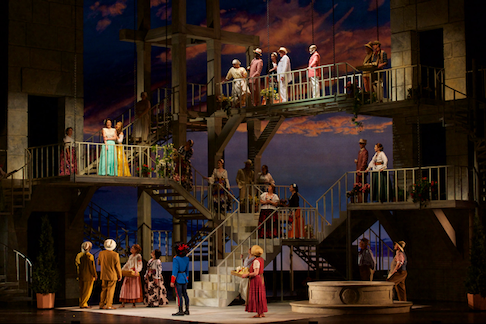 Entire cast (singers and actors)
Overall it is a triumph of artistic perversity, and the physical production amplifies the torment for all concerned, with a stage-filling M.C. Escheresque assemblage of industrial-strength staircases leading to landings with no function. Sicily’s torrid Messina has never looked chillier.
Considering the unnecessary handicaps imposed on them, it’s a wonder the performers manage to survive at all. But Shakespeare’s play, and the characters of the squabbling titular lovers, are apparently indestructible; assoon as they are in charge, you can feel the musing audience come alive again. The laughs are real, not forced; the drama soars.
As the secondary pair of lovers Hero and Claudio, carried their weight but set no fires. Laura Tatulescu, a notably saturnine Despina in Seattle Opera’s recent CosÏ, was a little colorless dramatically, even for the colorless-virgin character she was playing, but she sang appealingly, especially in the duet with her companion Ursule (Avery Amereau, a superb supporting performance). Craig Verm, the boisterous-bro Ferrando of Seattle CosÏ, contributed fine vocalism to his ensemble numbers but was strangely subdued as Hero’s jealous lover; even with the advantage of an interpolated revenge number (from Berlioz’s Benvenuto Cellini) he seemed utterly unengaged with the role. 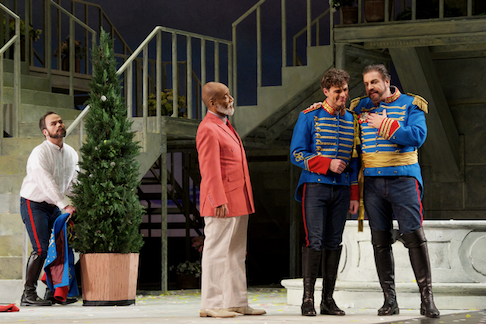 Andrew Owens (Benedict), Marvin Grays (Leonato), Craig Verm (Claudio), and Daniel Sumegi (Don Pedro)
But like the play, the whole show depends in the end onthe two principal singers’ gifts, and on Sunday afternoon we had a pair of pippins. Andrew Owens, bushy of beard and bouncy of demeanor, sings BÈnÈdict’s busy, declarative music with brio; he has a sharp comic sense which enlivens his every scene. Most astonishingly, when forced by the director to climb the eternal stairs backwards, does it with Èlan.
Hanna Hipp, a Rossinian mezzo with the chops to take on Strauss’s Composer in Ariadne auf Naxos, was queen of the evening. Her sung and spoken English a model for everyone else on stage, her character, sprightly, furious, and rueful by turns, never let the moment down and bumped up the energy whenever it sagged.
The unobtrusive accompaniment of conductor Ludovic Morlot provided the most important support for the whole evening. The departing music director of the Seattle Symphony has particularly excelled in French repertory, and he excelled equally with the idiosyncratic chiaroscuro of Berlioz’ orchestration and the firmly traditional structure pacing of his arioso.
I’m glad to have had a second chance to see B&B live (the first was one streamed from Glyndebourne last summer). And though this ambitious remodeling turned out about as unsatisfactory as can be imagined, I feel I’ve learned two things about the piece. It is viable; but even in French we need to recognize that in opera houses as large as most in America, an all-sung version it the only way to go. I’m sure that Carmen was wonderful in its original opÈra comique form; but does anyone really want to go back to regularly performing the original?
I don’t believe it. And if that’s the case, can’t we consider setting the spoken parts of B&B as “accompanied recitative,” as Ernest Giuiraud did for Bizet’s work? Isn’t there enough vocal music by Berlioz to allow a gifted pasticheur material for matching? What a shame we didn’t ask Stephen Sondheim to take a look at the job years ago.
Roger Downey