In recent years, there has been a tendency with many of Glass’s scores (one
thinks of the First Violin Concerto, for example) to revisit his tempos and
this was very notable in the pacing of the opera this time round. It made
for a very long evening, but the upside was a transformation in the music
that added much needed depth and emotional integrity to a work that
sometimes seems to be missing both. A downside, of course, is that in an
opera that really has such minimal narrative to keep it moving one’s
concentration and endurance is tested to the limits. This sometimes felt
like Parsifal on benzodiazepine, or an over-dramatized Bach
oratorio – but it is to the credit of a splendid cast and a brilliantly
engaged conductor that this performance was so spellbinding. For a first
night, which so often isn’t perfect, this was as close to ideal as I’ve
heard in many years.

If Satyagraha is the best of the three profile operas it is
largely because it has neither the astringency ofEinstein on the Beach nor the monotonal repetitiveness of Akhnaten. Minimalism can sometimes sound very temporal and hollow,
but here at such a broad tempo (take, for example, the scene in Act II with
the burning of the passes which could have almost been lifted from the
pages of re-orchestrated Bach) and the effect was transcendental. That is
not to say that the score doesn’t motor onwards like a typewriter – the
male chorus, with their taunts of “Ha! Ha! Ha!” were acidic against the ENO
woodwind – not always exactly synchronised – but this is a long scene and
hugely demanding. The closing pages of Act III, where Gandhi stands beneath
the plinth of Martin Luther King against darkening clouds that foreshadow
the assassinations of both men, was devastating, yet taken at this chosen
speed you felt it was never-ending. The music felt as oppressive as the
bleakness of the imagery on stage; chromatic shifts in key from the
orchestra were like changing projected film slides on a permanent loop.

For a composer so heavily involved in composing for film, it’s perhaps not
surprising that ENO’s production of Satyagraha should acknowledge
that debt, however tangentially. Whether it’s a steamship rolling slowly
across the corrugated steel that remains the constant backdrop for this
staging, or film of civil rights marches in support of King’s speech, the
camera is both a means of projection and a means of communication. Before
film, there was newspaper and here it is reimagined in every possible way.
It is used as a means of peaceful protest, it is used as a means of
violence, where the male chorus “stone” Gandhi into submission. It is used
as a backdrop against which Sanskrit words are projected, it is used to
cultivate fear and terror, where unspeakable violence is carried out behind
curtains of newspaper in the darkness of the shadows. Before newspapers,
there was just the word. Great tablets inscribed with single Sanskrit
letters descend like monolithic slabs that recall the Ten Commandments. 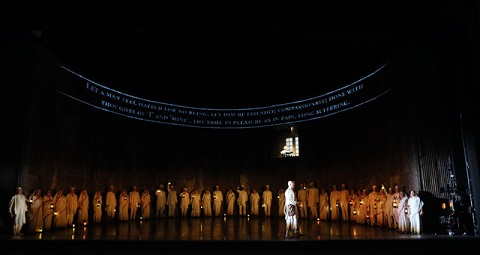 Phelim McDermott and Julian Crouch, the director and designer of this
production, have made this opera as theatrical as possible to stem the
awkwardness of its lack of narrative. There is an overwhelming sense of
austerity, poverty and hardship to the corrugated township of late
nineteenth century and early twentieth century South Africa here – and it
even extends to the muddied, frayed bottoms of the women’s long dresses as
they are dragged through the dirt. The attention to detail misses very
little. This is a recycled staging, where the wicker baskets of Tolstoy
Farm are magically transformed into giant fish, where torn and scrunched up
newspapers are turned into huge monsters and disfigured puppets and where
endless streams of sticky tape that served firstly as a fence are then torn
down and folded like origami into a giant stick figure of a hangman. You
are often awestruck by the acrobatics of Skills Ensemble. Not everything
was perfect, but when it worked you couldn’t take your eyes off it. A scene
where an image of the earth, spinning like a globe, appeared on a round
table, for it and one of the performers, to slowly be lifted towards the
roof of the stage was stunning.

Despite these sweepingly dramatic moments, so much of Satyagraha
remains static. This production doesn’t wear its philosophy lightly.
Excerpts from the Gita, or the principles of ‘truth force’ pepper the
walls, like religious graffiti. Reading them is a form of stasis in itself.
The arrest of the protestors in Act III is symptomatic of the opera’s
glacial pacing. The armed soldiers could have been wading through treacle,
yet it was oddly balletic to watch. For much of Act II Gandhi doesn’t
actually sing a note of music – he wanders the stage like a prophet, and
yet it was compelling to watch. The Act II burning of the passes seemed
interminable, and would have been had it not been for the absolutely superb
playing of the ENO orchestra who brought such intensity to the whole scene.
King’s transformation at the end of Act III into a great orator was
entirely mimed, and yet for almost twenty minutes you were transfixed as if
you were watching a silent movie. 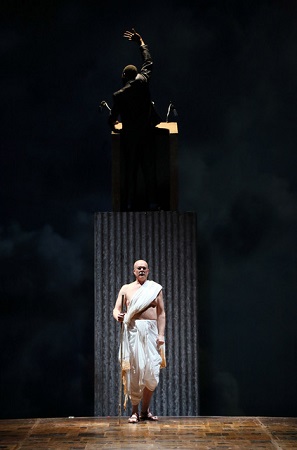 So to the singing, which I found to be first rate. Toby Spence, singing the
role of Gandhi for the first time, was compelling in the title role. The
part of Gandhi is difficult because for large sections of the opera the
tenor isn’t singing – though he is on stage. Spence is undeniably
impressive – he transforms from young lawyer in Act I to philosopher and
emerging prophet in the rest of the opera with convincing believability.
The voice isn’t stentorian (I don’t think this role really requires that
kind of singing), but there is pathos, humanity and deep insight to his
interpretation. He is also a formidable stage actor, which isn’t something
one should take for granted with an opera singer. 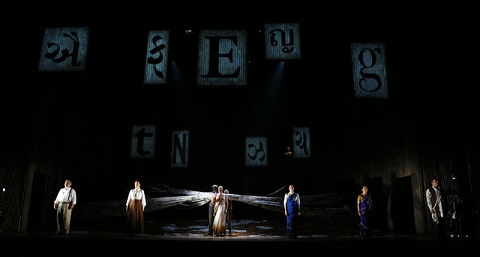 Commanding as Kasturbai was the Canadian mezzo, Stephanie Marshall. The
voice is both huge and rich, and this was a powerful assumption of the role
of Gandhi’s wife. Charlotte Beament, as Miss Schlesen, Gandhi’s secretary,
sounded a touch tentative at first but her brilliant and bright soprano was
able to cut through the orchestra like glass. The composer is rather
merciless in his demands for this particular role, since so much of it lies
in the upper registers of the voice, but Ms Beament was often
breath-taking, and her soprano is fresh enough to hold those high notes
without the notes cutting short. By any standards, this was outstanding
singing. Andri Bjˆrn RÛbertsson, as Lord Krishna, sang magnificently, but
was less compelling to watch I’m afraid. Nicholas Folwell as Mr Kallenbach
seemed less secure when singing solo, where the voice appeared small, than
he did when singing as part of an ensemble, where he largely excelled.

Karen Kamensek, the conductor, is something of a Philip Glass specialist,
and it showed. Her command of the score was almost absolute, and she
obtained from the Orchestra of English National Opera playing that was
meticulous, sumptuous and impressively coherent. It’s one thing to get the
notes in something like the right order; it’s quite another to make this
score sound as deeply involving and as profound as Ms Kamensek achieved
here. This was a major achievement for her and the ENO orchestra, who
should probably now be considered one of the leading opera orchestras for
Glass’s major works.

ENO’s Satyagraha was a major operatic landmark when it was first
performed over a decade ago. It is still that – and absolutely unmissable.