‘s new production had quite a lot riding on it. Kramer’s vision proved to
be vividly eager to please, with over-the-top party scenes, but also an
interesting take on Violetta’s journey.

A co-production with Theater Basel where has already debuted, English
National Opera premiered the new production of Verdi’s La traviata
on Friday 16 March 2018, Daniel Kramer directed and Leo McFall
conducted, sets were by

sang Germont, a role he first sang in 1988 and marking his fiftieth year
singing with the company!

Leo McFall conducted a lithe and shapely account of the prelude (with the
curtain down), and then we launched into Act One. Kramer and his team set
it in a sort of 1930s bordello, all mirrored walls and hyper-active
staging, this party was desperate to please. Whilst the style was loosely
1930s, with plenty of Weimar Republic-style references in the staging,
Violetta’s costumes throughout were of a different era (more 1940s) rather
setting her out from her contemporaries. For Act Two we moved to a plain,
stripped down stage, just a swing, grass and a flower bed, but with Flora’s
party, we reverted to the style of Act One. During this latter party,
mattresses were in evidence, and these re-occurred in the last Act, laid
out regularly and evoking graves. At the front, Violetta was digging her
own grave. 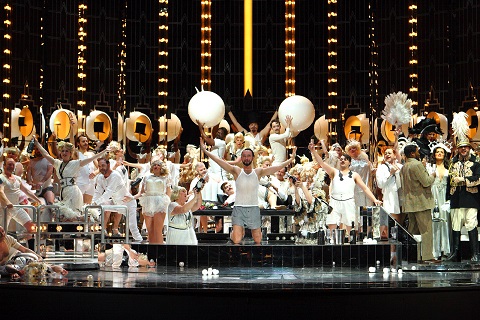 Kramer’s production was far too inclined to tell us what to think, rather
than allowing us to make our own decisions. The party scenes were
desperately insistent, but more worrying was the emphasis on death. In Act
Two scene one, the flow bed could be read as a grave and Violetta gathers
flowers, Ophelia-like, and at one point hides herself beneath the turf.
Then at Flora’s party, the women’s make-up seemed to evoke the Mexican day
of the dead, and of course, in the last act, we had Violetta digging her
own grave in the cemetery. One idea would be interesting, but all of them
together became rather too much.

Soprano Claudia Boyle has formerly sung Leila in The Pearl Fishers
and Mabel in The Pirates of Penzance at ENO, and Violetta is a big
leap but she has also been on the young artist programme at the Salzburg
Festival. The staging in Act One was very unhelpful both to her and
Lukhanyo Moyake’s Alfredo, the chorus was visually and aurally too dominant
so that Kramer seemed to be blurring the boundaries between solo and
ensemble, but this meant Boyle’s contributions were insufficiently
spot-lit. For the great Act One finale, she showed sparkling style with the
coloratura, but the desperation present in her acting did not quite connect
with her singing but this is something which will come. Lyric sopranos tend
to find the subsequent acts of La traviata difficult as they
require remarkable reserves of strength. Whilst never displaying a lyrico
spinto amplitude, Boyle developed a remarkably wiry sense of strength. The
scene with Alan Opie’s dignified and beautifully detailed Germont certainly
raised the level of intensity, with the feeling the veteran singer urging
Boyle to greater dramatic heights. She coped heroically with the final
act’s dramatic requirements and created a genuine sense of Violetta’s
illness. In fact, this was a noticeable thread running through the opera,
we very rarely forgot that Violetta was ill, even in the pastoral moments
at the start of Act Two. This was a promising role assumption, with the
sense that there will be striking developments to come as Boyle’s
experience with the role develops.

Lukhanyo Moyake was South Africa’s representative in the 2017 BBC Cardiff
Singer of the World, and he has been singing with Cape Town Opera Company
since 2010. He has a robust tenor voice and an engagingly puppyish stage
presence. His Alfredo was a naive countryman (distinguished by his clothing
from the sophisticated party-goers), thankfully lacking the feeling of
idiocy which bedevils some performances. His singing had remarkable power,
and though there were one or two rough edges and an occasional steely top,
this was a finely engaging performance. You feel that the voice is moving
towards spinto territory, and Moyake’s performance had a wonderful
generousness to it, allied to a vibrancy of tone. He is definitely someone
I would like to hear more of, and his English was creditably
comprehensible. 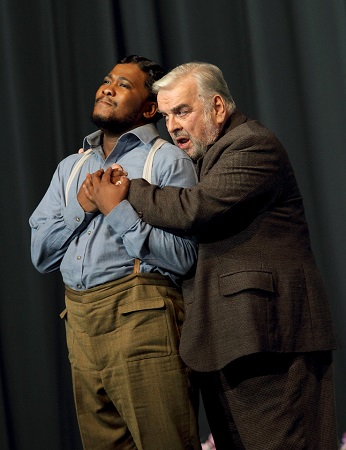 Alan Opie (celebrating his 73rd birthday later this month) was simply
remarkable as Germont. There was little feeling of age in the voice and a
wonderful sense of the experience behind the performance. This was a finely
subtle account of the role, we lacked the determined martinet which has
been in evidence in other recent productions, instead Opie’s Germont was
someone with different expectations the scene with Boyle’s Violetta was a
fine example of two different views coming together, and each singer showed
how, as the scene progressed, their character was forced to re-assess the
other. Opie’s Germont was relatively understated, but each gesture whether
vocal or physical told volumes. This was a fine ensemble performance, one
which through craft and experience lifted the general level of the drama. 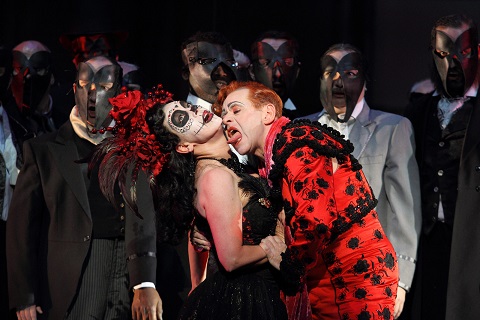 Heather Shipp made a strong impression as Flora, rising above some
unflattering make-up in Act Two and managing to bring out a sense of care
for Violetta despite the determinedly ‘sexy tart’ depiction of the
character. The men were strongly cast but rather depicted as types rather
than characters. The biggest impression was made by Aled Hall as Gaston
thanks to a series of outrageous costumes, but there was good support from
Benjamin Bevan as the Baron, Bozidar Smiljanic as the Marquis and Henry
Waddington as Doctor Grenvil. Martha Jones gave a powerfully characterised
performance as Annina, without ever over-dominating the scene, and I hope
to hear more of her. 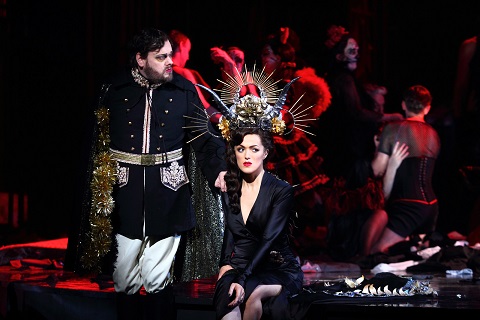 The chorus did everything required of them, entering into the party
hi-jinks with a will and there were no additional dancers for Flora’s party
scene. Whatever you thought of the production, the chorus performance was a
real tour-de-force. The two small Act Two roles, Joseph and the messenger,
were provided admirably by chorus members Pablo Strong and David Campbell.

Leo McFall drew a fine-grained performance from the orchestra. Highly fluid
with plenty of rubato, McFall also kept things moving and Act Two (the
longest of the three acts) flew by without ever seeming pushed. This was a
very modern take on the piece, clean and lithe, but one which did not
eschew tradition either and drew very fine playing from the orchestra. 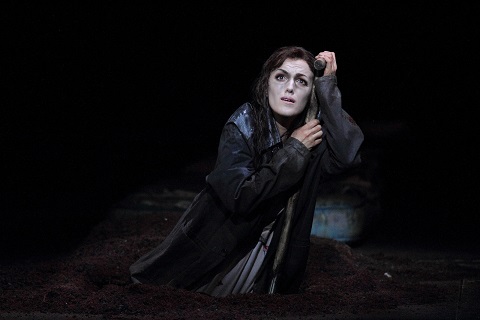 Kramer’s production ultimately seemed a little too eager, too desperate to
please and there were moments when you wanted it to calm down a little. The
result is promising, if Kramer is willing to allow the piece to develop,
and I certainly feel that as the run progresses the performances from
Claudia Boyle and Lukhanyo Moyake will continue to grow and deepen, aided
by the remarkably generous performance from Alan Opie.