As the walls of the Almaviva abode revolve, constantly, we are whisked into
the back-quarters – the kitchen, the boot-polishing room, the laundry –
which underpin aristocratic luxury. It’s a sort of horizontal
upstairs-downstairs of class divisions, as maids slyly observe mistresses’
misdemeanours and footmen feign indifference to aristocratic indiscretions.
Figaro and Susanna plan the construction and placement of their wedding bed
while a scullery maid scrubs the stairs; as the Count woos Susanna, a
housemaid carries a basket of oranges through the room, head bowed but eyes
and ears craning.

Shaw strives to create a sense of the busyness of the back-room personnel,
whose labours ensure that the front-of-house is a portrait of tasteful
tranquillity and aristocratic idleness. But, despite having seen this
production in both 2011 and 2014, I still can’t fathom why so many of the
Almavivas’ workforce are suffering from a sleep disorder, unless the aim is
to show the inefficacy and impotence of the Count as master of the house.
Even the gardener Antonio is encountered asleep in a chair: and, so, his
leap from la-la-land to lambasting fury makes a nonsense of the idea that
he has just come running from the flowerbeds, his anger at window-hopping
page’s destruction of his gardenias throwing another spanner into the
maelstrom of the Act 2 finale.

Revival director Peter Relton hasn’t injected much of a pick-me-up into the
proceedings, but part of the blame for the slightly lackadaisical spirit
that I felt on this occasion seemed to lie with Brabbins. The ENO Orchestra
sounded decidedly messy at times – though things did tighten up in Acts 3
and 4 – and pit-stage coordination was often adrift (though subsequent
performances in the run will surely improve in this regard). But, tempi
felt perennially just a shade too slow, with soloists often seeming to be
tugging at the bit. The action of the recitatives sometimes laboured and
dragged, though that’s also a weakness of the production, for it makes
heavy work of the dramatic business: the intrigues and mishaps simply don’t
buzz, fizz and whirl.

There are plentiful motifs, but they don’t always for mischief make. For
example, Shaw has turned Basilio into a blind chorus-master (a variation on
the piano-tuner stereotype I guess) which facilitates a few visual gags –
incessant tapping of a white stick, the conducting of an invisible choir as
the actual wedding chorus revolve off the set – but lost is the irony of
such vicious lines as ‘What I said about the page, it was just a suspicion’
in the Act 1 trio, when Cherubino is discovered hiding and quaking in a
trunk in Susanna’s room. Colin Judson sings with phrasing of curling
obsequiousness and pertinently nasal piquancy but, deprived of his Act 4
aria, Basilio fades into the ‘foliage’ by Act 4. 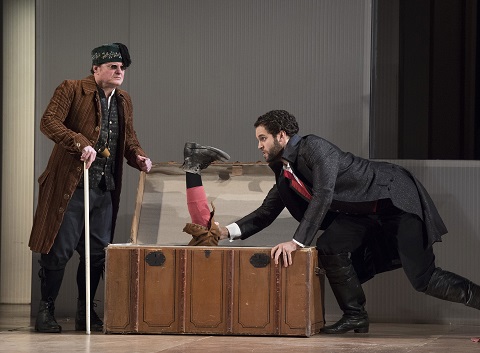 A few pre-curtain chuckles were garnered when a bedpost-carrying Figaro
fiddled with an on-stage harpsichord, only to leap back in amazement when the
keyboard seemed unilaterally to strike up the opera’s overture; but the
gesture was less amusing when the Count repeated it with variations at the
start of Act 3. And, the thumps and bumps (festive fireworks?) which
accompanied the lengthy scene change before the final Act, as well as the
vomiting in a flowerbed by an inebriant servant, were simply tiresome.

When the main ‘funny business’ of the first couple of Acts is some
front-of-curtain shenanigans then things have gone awry, and there were
times in Acts 1 and 2 when I had to remind myself that Figaro is
an opera buffa. Fortunately, the arrival in Act 3 of Janis Kelly’s
Marcellina, eager to claim the fulfilment of her marriage contract with
Figaro only to discover that her ‘husband-to-be’ is her long-lost son,
Rafaello, tipped the scales enchantingly, from to humdrum to humorous.
Kelly, alongside Keel Watson’s bemused but beaming Doctor Bartolo, really
did show how it’s done; and the comic duos’ esprit lifted the sharpness and
sprightliness of the spat between Thomas Oliemans’ Figaro and Rhian Lois’
Susanna, resulting in an invigorating Act 3 sextet. One could only regret
that Kelly, too, was deprived of her Act 4 aria. 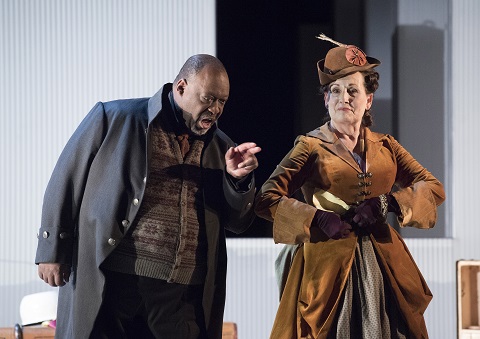 Much of the appeal of this production derived from the appearance of
several young singers in role debuts. Lois was the best of the bunch:
‘progressing’ from her WNO turn as Barbarina, she was a vibrant, nimble,
quick-witted Susanna, animated both dramatically and vocally, who had no
trouble getting the better of both the loyal but laborious Figaro and the
fickle but foolish Count. ‘Deh vieni, non tardar’ was beautiful, Lois’
unadorned melodic sincerity proving a masterful counterfeit.

Ashley Riches both sang and acted superbly as the hapless Count, puffing
out his chest, squaring his shoulders, striding imperiously in his black
leather boots, but ever sporting an air of slight bafflement as to how
everyone else seemed to be in the know. Riches’ recitatives were fluently
and convincingly delivered and in ‘VedrÚ mentr’io sospiro’ he used all of
his vocal might and nuance to offer a momentarily persuasive riposte to the
uncovered plotting of Susanna and Figaro. 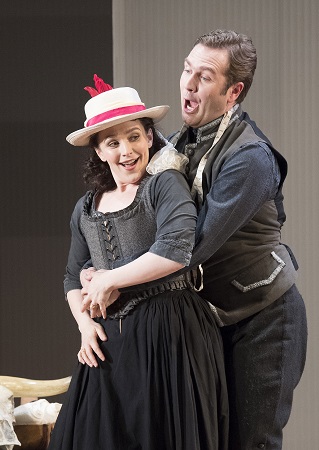 Thomas Oliemans’ Figaro was a pleasant enough chap. The Dutch tenor has a
relaxed manner and attractive voice, but I’d have liked a bit more vocal
ebullience, and physical presence. I was impressed by Katie Coventry’s
Cherubino: just the right amount of richness in the voice to suggest
nascent sexual burgeoning but balanced by a lovely gamine gentleness which
Coventry did not overplay. 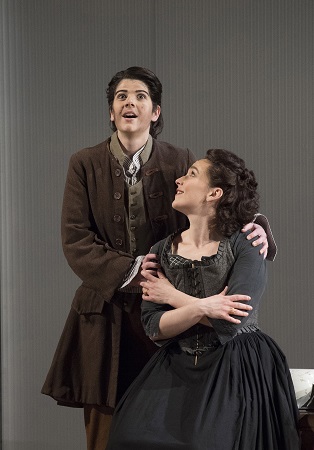 The appearance of Lucy Crowe making her role debut as Countess Almaviva was
one of the big draws of this revival for me, but I left the Coliseum
feeling slightly disappointed. We did have an occasional glimpse of the
heavenly threads of Crowe’s high soprano, and her voice has become enriched
with both new weight and fullness; but I felt that Crowe did not display
the plushness of tone and colour required to communicate the Countess’s
genuine distress and the pathos of her situation. She was able to soar over
the ensemble, as in the Act 2 finale, but in the Countess’s two arias there
was neither the enveloping luxuriousness nor the poignant eloquence to
really win this listener over to the abused Countess’s cause. If the vocal
characterisation seemed rather one-dimensional then Crowe also seemed not
entirely comfortable dramatically: obviously attracted to Cherubino (she
stroked his cheek during ‘Voi che sapete’), she later accepted her
husband’s apologies at the close only to don modern dress and pick up her
suitcase, heading, it seemed, for the marital exit. It may not have been
Crowe’s fault, but the characterisation didn’t seem to add up. 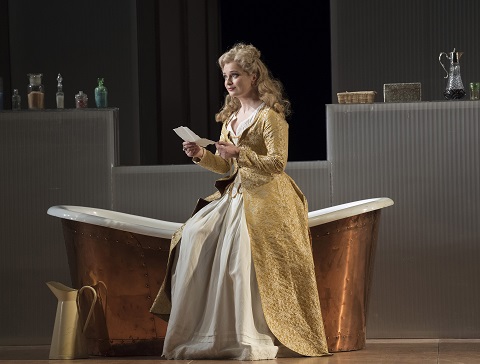 Shaw’s production tells the tale clearly – and given the nonsensical
complexity of both libretto and back-story that in itself is no mean feat.
Moreover, there are many vocal performances to enjoy in this revival. I
think that my dissatisfactions come back to the production and design. The
white-washed walls are lowered for Acts 3 and 4, opening up spaces which
could be anything and anywhere. The cast may sport – at least until the
close – period costumes, and oranges, flags and bull-fight motifs hint at a
Sevillian setting, but the monochrome architecture and flowerless garden
provide no context in which da Ponte’s larger-than-life characters can come
to musical life and convincingly convey the human forgiveness which, in its
concluding episode, Mozart’s opera so enchantingly and comfortingly
espouses.

Mozart: The Marriage of Figaro