Mezzo-soprano Samantha Hankey, 25, from the USA, was crowned the overall
winner, receiving £15,000 and the guarantee of a role within five years at
one of the top opera houses represented on the competition jury. She also
won the Media prize, chosen by a panel of opera critics and classical music
journalists.

A native of Massachusetts, Hankey attended the Merola Opera Program in San
Francisco and recently graduated from The Juilliard School. In 2017/18 she
makes her debuts as Rosina in Il barbiere di Siviglia at Den Norske Opera,
SiÈbel in Faust at Grand ThÈ‚tre de GenËve, and her Carnegie Hall debut in
Handel’s Messiah with Musica Sacra. She was Grand Finals winner of the 2017
Metropolitan Opera National Council Auditions and first prize winner of the
Dallas Opera Guild Competition.

‘I am honoured and humbled to be awarded the Glyndebourne Cup,’ she says.
‘The announcement left me speechless. This entire week has been incredible
working with the staff at Glyndebourne and all who were involved in the
competition, and it means so much to me to have been acknowledged as having
something to say in interpreting Mozart’s music. I cannot say “thank you”
enough for this honour”

Winning the Audience Prize, with a third of all votes cast by those in the
auditorium who watched the final, was Kosovan soprano Elbenita Kajtazi, 27.
Kajtazi as a young girl was forced to flee her home in war-torn Kosovo with
her family, and live as a refugee in Albania. ‘Every time there would be a
dangerous situation – the soldiers would come into our house or something
like that – I would find a corner and sing to myself. Singing was my way to
be able to feel safe,’ she recalls. 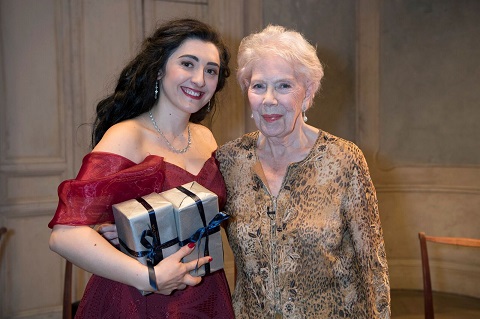 On her win she commented: ‘The audience prize means that the audience loved
me and what more could I ask for? I’m for the first time here in England
and I get this kind of treat and I’m able to get in people’s hearts, this
means the world to me.’ Kajtazi also took Third place.

Second place went to American soprano Jacquelyn Stucker, 28, currently a
Jette Parker Young Artist at the Royal Opera House, where she recently
performed the role of Frasquita in Barrie Kosky’s production of Carmen.

The Ginette Theano prize for most promising talent was awarded to American
soprano Emily Pogorelc, 21. Pogorelc was the youngest competitor to reach
the final and is currently entering her final year at the Curtis Institute
of Music.

The prizes were presented by Dame Janet Baker, the competition’s honorary
president who helped to adjudicate the final. The final of the Glyndebourne
Opera Cup was broadcast live on Sky Arts, hosted by Chris Addison and
Danielle de Niese.