I had been hoping for years to catch up with a production of this acclaimed
piece, but schedules have conflicted and life had intruded. Happily, I have
made up for lost time, and the SDO mounting was so persuasive that I
immediately vowed to seek out another performance of this masterwork at the
earliest opportunity.

In this local premiere, the piece was so lovingly mounted that it was clear
the company was treating the work as the masterpiece it decidedly is. The
lush score borrows stylistically from Puccini here, Debussy there, here a
taste of Strauss, there a dash of Britten, but the unifying whole is
peppered with Latin undertones and the voice is uniquely Cat·n’s.

Almost the entire plot unfolds on the deck of a ship sailing up the Amazon
bound for Manaus. There, a legendary opera house awaits the return
engagement of diva Florencia Grimaldi, performing a concert as she returns
to her homeland to reunite with her lover Cristobal, a hunter of exotic
butterflies. Her quest to rediscover her lover Cristobal is the whole
driving force of the piece. Although she is traveling among other
passengers in disguise, Florencia’s enigmatic persona drives the
motivations of the other characters. 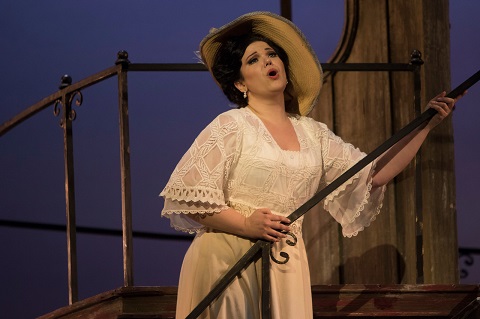 The music making was superlative, starting with the vocals. In the title
role, Elaine Alvarez made a stunning impression. Her pliable spinto soprano
easily encompassed every demand of three wide-ranging arias. The rich,
pulsing tone was absolutely even throughout the wide-ranging part, and her
alluring vocal presence anchored the performance with a poised, polished
musical presence. Ms. Alvarez made us abundantly aware of why the public
was in awe of her towering talents.

Every bit her equal, MarÌa Fernanda Castillo was a luminous Rosalba, her
plush lyric soprano soaring above the staff to provide many of the
evening’s most goose bump inducing moments. Ms. Castillo’s substantial
soprano is tinged with pure gold and her sympathetic phrasing endeared her
to the spectators. As her partner in romance, dashing Daniel Montenegro
(Arcadio) provided exceedingly poised singing in equal measure. Mr.
Montenegro is not only an ingratiating lyric tenor, but also has a winning
way with a high-lying, pulsing phrase that made a fine impression. As the
two love interests, the pair provided one of the evening’s highlights with
a rhapsodic Act II duet. 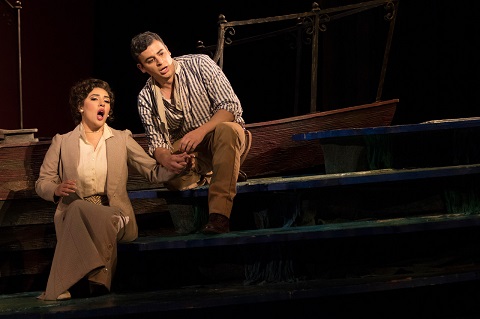 Ms. Zabala’s rather barbed opening pronouncements eventually morphed into
some mellifluous phrases infused with deference and luminosity. Hector
V·squez was a solid presence as the stolid Capit·n, his seasoned baritone
ringing out with honesty and clarity. Chorus Master Bruce Stasyna’s
well-schooled ensemble not only sang with glowing tone and dramatic fire,
but also cleanly executed some inventive staging while doing it.

Conductor Joseph Mechavich worked wonders with the orchestra, mastering
every harmonic surge and eliciting finely tuned detail from the pit.
Maestro Mechavich also skillfully wed singers, dancers and instrumentalists
into a seamless ensemble. He controlled the arc of the piece with refined
skill, all the while he somehow magically made the outpouring of melodies
and effects feel exuberantly spontaneous. 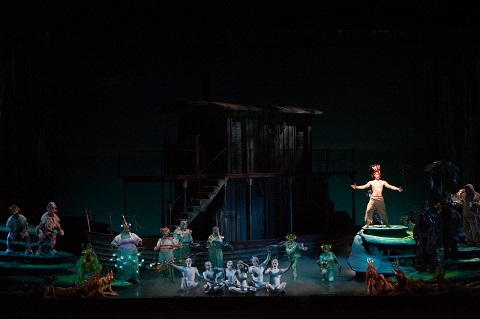 The handsome physical production originated at Indiana University, but
seemed a perfect fit for the resources of the Civic Theatre. A
forty-two-foot, double-decker riverboat dominates the stage as part of Mark
Frederic Smith’s masterful set design. It begins at a pier in the opera’s
first scene, with a boathouse structure framing the action. However, as the
craft soon sets sail on the murky Amazon, the house flies away, and lush
foliage droops artistically around the action.

The effect never becomes tiresome since the ship rotates on a turntable to
reveal different, detailed perspectives of its construction. When the ship
beaches in the storm, terraced riverbanks swing into place down left and
right, and up right, which afford mystical river creatures to gambol and
pose with enigmatic abandon.

Those “creatures” (aka the chorus and corps de ballet) were lavishly
costumed by Linda Piano, who seems to have limitless imagination. The
masks, fanciful accessories, painted body stockings and footwear were
meticulously coordinated, and were complemented marvelously by Steven W.
Bryant’s wacky, winning wig and make-up design. Ms. Piano also created
lovely, character specific period wear for the diva Florencia, upper and
lower-class guests, and laborers, greatly helping to define the
relationships.

Todd Hensley’s brooding, ever-changing lighting design perfectly captured
the emotional shifts in the plot, as well as the climate changes on the
river. His choices of color filters were especially apt. Only two effects
might have been improved upon: the storm lightning was tracked to look too
predictable, and the overall threat of the turbulent storm (as heard in the
music) was not realized with enough abandon. And the climactic moment of
Florencia transforming into a butterfly went for too little. The unfurling
of the costume, creating two wings, was a great start, but the rotating
star gobo was a far cry from the coup de theatre that was called for. Think Defying Gravity, Wicked’s Act One closer, where the main
character soars up to the wings as the black cloth of her cape spreads to
fill the entire backdrop around her, and you get some idea of the
jaw-dropping effect that might be needed.

Still, director/choreographer Candace Evans worked wonders with her
resources, achieving moments that were beautifully judged for character
revelations and dramatic insights. Ms. Evans deployed her assemblage of
spirits with aplomb, creating a fine diversity of groupings and movement
without ever creating a distraction. Indeed, she instilled a keen sense of
dramatic focus was one the productions strong suits.

From the downbeat and the start of the engaging musical effects, to the
ascendant metamorphosis that rang the curtain down, this was one memorable
river journey I wished would never end.