‘We lived in a heap together in one barrack. The flooring was rotten and an
inch deep in filth, so that we slipped and fell. When wood was put into the
stove no heat came out, only a terrible smell that lasted through the
winter.’ So wrote Dostoevsky, in a letter to his brother, about his
experiences in the Siberian prison camp at Omsk where he was incarcerated
between 1850-54, because of his association with a group of political
dissidents who had tried to assassinate the Tsar. It was the
quasi-fictionalised account of Dostoevsky’s imprisonment, published
predominantly in the journal Vremya between 1860-62, that was
Jan·?ek’s source for the libretto of From the House of the Dead.
The composer selected characters and incidents – events that occurred in
the prison hospital, the celebration of feast days – and assembled them
into a mosaic punctuated by three extended narratives in which individuals
recount the violent crimes and contexts that have resulted in their
incarceration and suffering.

Warlikowski tells us that he ‘made a conscious decision not to re-read
Dostoevsky’s novel’ wanting to keep at bay his youthful fascination with
this text, and ‘focus more directly on Jan·?ek’s adaptation of the novel,
and use his score and libretto to create a world not specifically
‘Russian’, but more universal in feel.’

Nothing wrong with that: violence, (in)justice and freedom are universal
concerns, and all human existence involves suffering in some form. But, the
practical outcome might lead one to think that the opera had been based
upon a text which read, ‘We lived together in a shabby recreation hall,
playing basketball, lounging about in smart tracksuits, watching football
on a plasma television screen. A prostitute was made readily available, and
on public holidays we were treated to champagne and soft-porn
entertainment.’ Warlikowski titles his programme article ‘A Journey into
Hell’ but in fact these detainees seem to be having quite an indulgent – if
not very salubrious – time.

Warlikowski and his designer Ma?gorzata Szcz??niak have replaced
Dostoevsky’s Siberian gulag with a modern penitentiary. The open stage is
vast and bare. Stage right is a glass office where the Prison Commander
reads a newspaper, occasionally looking up to check the cctv surveillance
monitor, as prisoners wander in and out to do business with the
drug-dealing guards. The office swivels and, from my position in the
Balcony, the glass frequently reflected conductor Mark Wigglesworth in the
pit, weakening the realism, physical and psychological, that Jan·?ek’s
music so powerfully establishes. 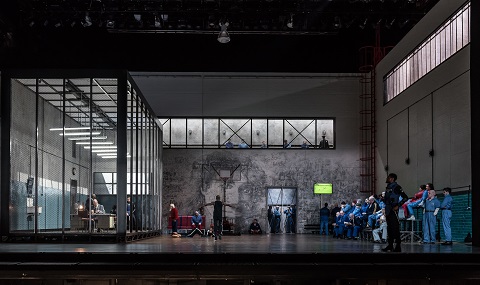 During the overture it becomes clear that when Warlikowski says he wants to
make the opera ‘more universal’ what he actually means is more
‘ideological’. Projected onto the steel squares which form a bulwark of a
stage curtain, a film of Michel Foucault critiquing the prison system
unfolds. If the French philosopher’s words have power they don’t really
have relevance here – Jan·?ek and Dostoevsky were more interested in man’s
potential if not for forgiveness then at least for understanding, than in
the notion that the justice system only exists to justify the existence of
the police.

Moreover, the video images distract from what we are hearing – an
objective representation of social reality: that is, the clinking chains,
whiplash sounds and screams, mechanical sounds and the drum rolls which
break up the day as the opera proceeds. And, this is the principal problem
with Warlikowski’s production: it doesn’t listen to what the music is
saying and doesn’t respect the balance between realism and escapism that
the score achieves, as Jan·?ek’s bitter extremes of harmony, orchestration
and tessitura suddenly surge with a lyrical beauty so intense that it is
almost painful. 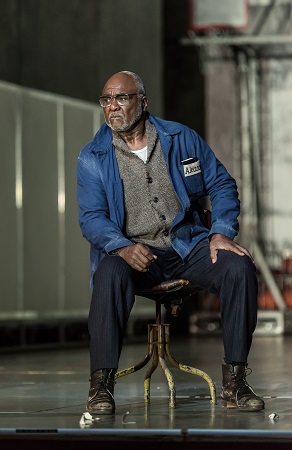 Time after time I found myself distracted by the frenetic stage activity –
such as the hyper-manic break-dancing of four black dancer-prisoners –
which obscured significant events and overpowered the libretto’s moments of
narrative focus and stillness. The arrival and humiliation of Petrovi? at the start of Act 1, and his subsequent flogging, for example, almost passed me by, and this
was not because Willard White was anything less than superb as he tried to
maintain the ‘aristocratic’ prisoner’s human dignity. The prisoners may be
indifferent to the beating Petrovi? receives, as he stands for their own
sufferings; but we are not, and it matters that his abusive treatment is
pushed by Warlikowski to the margins, not least because the beating mirrors
the violence in the tale which Luka is narrating – thus merging prison life
with the world outside, as direct and reported intersect. 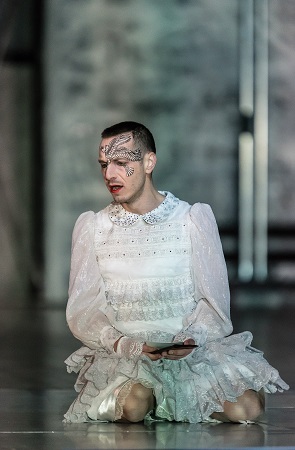 Moreover, Petrovi? is central to the opera’s shifting energies: at the
close, his freedom is emblematic, bound with both the release of the eagle
that has been cruelly baited by the prisoners and with the sadness of
separation felt by Aljeja, who is losing a friend – but also indicative of
renewal.

But, Warlikowski is not much interested in such renewal, or in the eagle,
though the latter’s instinct for freedom is associated with Dostoevsky’s
definition of the psychological motive behind crime as a burst of free
will, thus blending freedom and captivity in a single motif. Here, ‘The
Eagle’ is the name of a black basketball player who may or may not lob the
ball through the hoop in the final moments of the opera.

This opera is not concerned with philosophical speculations about justice
and the police force but with human motivations, acts and humanity’s desire
for freedom – as expressed in the three main solo narrations. One could not
fault the performances of ätefan Margita as Luka Kuzmi? or Ladislav Elgr as
Skuratov. But, the energy with which their strong, unflinching tales of
violence begetting violence should surge was blunted by the onstage
busyness, and in Skuratov’s case by another pre-Act projection, this time
of the real-life reflections of a prisoner on death row: truly distressing
but, in this context, also diverting. For Skuratov’s narration should hint
at the outside world, the freedom of the limitless steppes, releasing the
tension and admitting romance and heterosexual love into the prison as it
is listened to by the fascinated prisoners. And, Warlikowski once again
added unnecessary action – in this case, a mime by Pascal Charbonneau’s
Aljeja, to the tale. 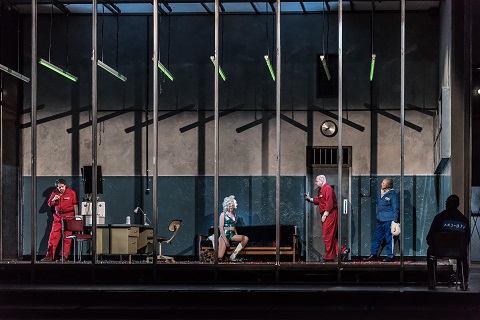 Similarly, the festive atmosphere of the following Easter celebrations
further heightens the emotion and evokes freedom. Warlikowski took the
ironic parallels which the festive entertainments offer to the tragic drama
of sexual love to extremes, however, as the men resorted to battering and
abusing inflatable dolls in a soft-porn extravaganza fuelled by champagne. 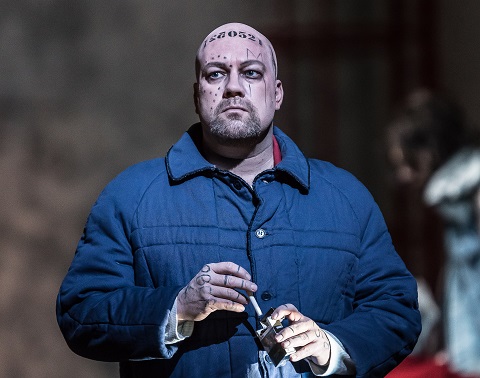 We had to wait until Act 3 for the feverish intensity to find a focus, in
äiökov’s terrible narrative about the tragic mistreatment of Akulka. Wanton
and worthless, despised by his fellow prisoner he may be, but Johan
Reuter’s warm and commanding delivery made äiökov’s narrative utterly
compelling, as the orchestral music, punctuated by the moans of pain of the
patients in the hospital prison, invited our sympathy. But, even here,
Warlikowski could not quite trust the score, and Allison Cook’s Prostitute
was called upon to mime the narrative – yet another needless intrusion.

The entire cast sang and acted with captivating conviction: the sufferings
and sorrows, flaws and failings of Nicky Spence’s Nikita, Grant Doyle’s
?ekunov, Graham Clark’s Antoni?, and the prisoners enacted by Jeffrey
Lloyd-Roberts, Peter Hoare, Aleö Jenis, Florian Hoffmann, Alexander Kravets
and John Graham-Hall were all brought affectingly to life. Wigglesworth
delineated the score’s tensions and jagged edges with precision but did not
always allow the moments of lyrical release to surge with warmth.

For this listener, the opera’s real power lies in the moments when the
prisoners’ bitter alienation from the ‘real’ world is overcome, when
outside world and prison converge, such as when äiökov recognises and
attacks Luka at the close and is reminded by the old prisoner that ‘He was
born of a mother too’, sobbing as he makes the sign of the cross over
Luka’s corpse, ‘There are bright moments in house of the dead.’ Such
moments affirm the value of humanity and the purpose of existence, even
amongst the lowest fallen.

As the score’s inscription states, in every creature there is a spark of
God. Warlikowski’s production fails to embody this small optimism which is
ever present in both the free and the captured.