David Pountney’s production, which uses a new critical edition based on the
1869 version but which reverts to parts of the original 1862 score in Act
3, is the first of three Verdi operas which will be conducted by Carlo
Rizzi over the next three years, with Un ballo in maschera andLes vepres siciliennes following in 2019 and 2020 respectively.

Pountney wastes no time confirming that Fate is exerting its inexorable
grip on the protagonists. Projected onto the plain, angled walls of
designer Raimund Bauer’s set, a wheel spins, slowly gaining momentum,
metamorphosing into a pistol which releases a bullet which surges forward,
unstoppably, towards its target. And, blood will beget blood. The opera’s
first death, of the Marchese di Calatrava, is marked by a blood-splattered
wall which continually weeps red tears in which both of his offspring,
Leonora and Carlo, smear their hands. Religion will offer no consolation:
the monks who watch the disguised Leonora make her ritual progress into the
seclusion of the holy cave in the mountain side, later don blood-stained
mitres.

Verdi, well-known for his adulation of Shakespeare, seems to have tried to
embrace ‘all of life’ – its variety, contrasts, contradictions, epic events
and insignificancies – in this opera. Spanning ten or more years, the drama
ignores the unities of time and action, as his librettist Piave noted in
the opera’s production book: ‘About 18 months pass between the first and
second acts; several years between the second and the third; more than five
years between the third and the fourth.’ (quoted in Julian Budden, The Operas of Verdi, vol.2, (Cassell, 1978)). The opera’s
geography is no less expansive, as the drama travels from an aristocratic
dwelling in Seville, to an inn and hillside monastery near Hornachuelos,
and on to Italy, to a wood and military encampment near Velletri, and back
again to Spain.

And during these years and travels, much happens, as epitomised by a letter
from Verdi to Cammarano, in which he envisages a military camp which later
made its way into La forza: ‘There is a grand scene in this style
in Schiller’s Wallenstein [Wallensteins Lager]: soldiers, camp
followers, gypsies, fortune-tellers, even a monk who preaches in the
world’s most deliciously comic style. You cannot put in a monk, but you can
put in all the rest, and you even can make a little dance for the gypsies.
In short, make me a characteristic scene that will give a true picture of a
military camp.’ (quoted in Franco Abbiati, Giuseppe Verdi, vol.2
(Ricordi, 1959)).

It is surely no accident that the two words which Pountney projects to
preface the two parts of his production, ‘Peace’ and ‘War’, evoke Tolstoy’s
epic historic chronicle. But, Pountney to some extent mimics Fate, in that
he exerts a firm grip on Verdi’s rambling and unwieldy, but potent, account
of Leonora’s elopement with the immigrant Alvaro, a dispossessed Inca
prince, following the accidental death of her father, and the subsequent
vengeful pursuit of her brother Carlo, who refuses to believe in the
lovers’ innocence and for whom only their deaths will suffice as familial
restitution. 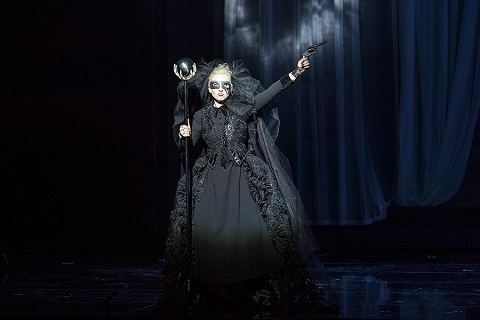 There are, inevitably, some gaps and non-sequiturs that cannot quite be
made to cohere, such as the disconcerting suddenness of the lyrical
outpouring of reunited love in the final act – when Alvaro is recognised by
the presumed-dead Leonora when the latter emerges from a hermitage, after
the lovers have been kept apart for ten years, two acts, and two hours of
music. But, Pountney and Bauer both simplify and unify, to good effect,
making Preziosilla – the young gypsy whose rousing song in Act 2 spurs the
young Spaniards to do battle against the Germans and who predicts for
Carlo, who is disguised as a student, a tragic end – an embodiment of Fate
itself. This black figure – who at times resembles the Queen of the Night,
and elsewhere a cabaret singer from Weimar – prowls through each act,
having initiated the fateful trajectory of the drama with three violent
bangs of her staff in unison with the blaring three chords for brass, horn
and bassoon which open the opera. Justina Gringyt?’s powerful, supple mezzo
really makes its presence felt, infusing the drama with a vibrant energy,
and Gringyt? doubles effectively as Leonora’s maid, Curra, who in this
production is particularly keen to hasten Leonora’s elopement in the
opening scene. 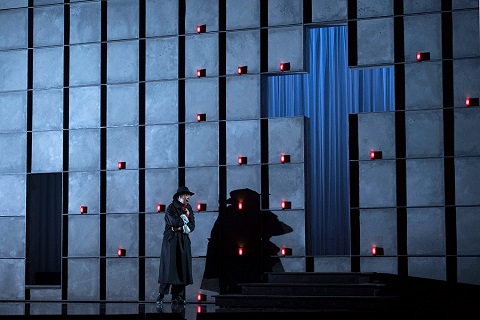 Moreover, the WNO cast live up to Verdi’s hope – expressed in a letter to
his friend Vincenzo Luccardi in February 1863 – that ‘Certainly, in La forza del destino the artists need not know how to sing
coloratura, but they must have some soul and understand the words and
express them.’ (see Franz Werfel and Paul Stefan (eds), Verdi: The Man in His Letters (Vienna House, Inc., 1973)). And,
none more so than Mary Elizabeth Williams, whose soft-edged gracefulness
and ability to withdraw her gentle soprano to the merest pianissimo
conveyed all of Leonora’s dignity, sincerity and sorrow. The intonation
took a little while to settle, and at her quietest she was not always able
to sustain the lyricism of the line, but the emotional impact of Williams’
singing was considerable, and she acted with nuance and conviction. ‘Madre,
pietosa Vergine’, in which the kneeling Leonora begs for divine forgiveness
from the Father Superior whose protection she seeks, was charged with
urgency and redolent with both religious belief and anguished guilt; her
final plea for peace, ‘Pace, pace’, rose persuasively to the top in sublime
intensity. 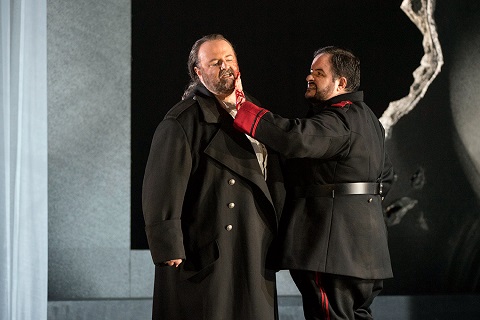 I thought that Pountney might have made more of Don Alvaro’s status as an
outsider, and ‘other’, but Gwyn Hughes Jones used his ringing tenor to
establish Alvaro’s bravado and courage; his sweeping arrival via Leonora’s
balcony was equal in panache to Otello’s ‘Exultate!’, while his third-act
aria, ‘La vita e inferno’, demonstrated expressive nuance. Luis Cansino’s
baritone was full of dark resentment, but his Carlo was rather stiff
dramatically.

I was impressed by MiklÛs SebestyÈn’s Padre Guardiano: the considerable
texture of his bass-baritone brought the character to life, establishing
the Father Superior’s gravitas and empathy, while as the unsympathetic
patriarch, Il Marchese, he was fittingly implacable and resonant.
Donald Maxwell was less full-voiced as the disdainful Friar Mellitone but
conveyed all of the latter’s irascibility.

The WNO chorus were in fine voice, impersonating foolhardy fascists, an
impoverished populace and merciless monks with equal fervour. Carlo Rizzi
demonstrated his innate appreciation of Verdi’s rhythmic arguments – the
tense syncopations of the overture undeniably signalling trouble ahead –
and balanced tempest and tenderness with discernment.