However rising American superstar soprano Angel Blue, notably marking her Canadian debut with Manitoba Opera from April 14th -20 th, 2018 also ensured that the timeless classic became a lesson in nobility and grace even against the dying of the light, as witnessed through the lens of her ill-fated heroine Violetta.

Last staged here in 2008, the 170-minute show (including two intermissions) directed by Montreal’s Alain Gauthier (MO debut) is notably the first offering co-produced by a consortium of five Canadian opera companies, including: MO, Edmonton Opera, Pacific Opera Victoria, Vancouver Opera and L’Opéra de Montréal, with the (mostly) re-cast production slated for each of the five respective cities throughout next season. 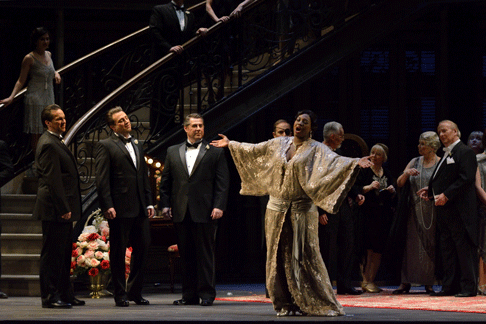 Typically set in the 1850s, this particular staging transports the story to 1920s Paris, with Violetta’s character, originally a courtesan dying of consumption, a.k.a. tuberculosis, inspired by real-life American cabaret dancer Josephine Baker, whose risqué performances lit up the “City of Light” during the Roaring Twenties.

However in the end, this noble premise ultimately becomes a moot point (albeit the decadent, art-deco sets and fringed flapper costumes created by Christina Poddubiuk, and built by Edmonton Opera and Pacific Opera Victoria, respectively, provide serious eye candy). Any allusion to Baker quickly slips away, with the Los Angeles-born Blue, a protégé of Placido Domingo praised by the New York Times as “the clear star” during her Metropolitan Opera debut as Mimi in Puccini’s La Bohème last September (and also sings the lead character with Toronto’s Canadian Opera Company in April 2019), and performs Violetta during her Royal Opera House Covent Garden premiere in January 2019, firmly stamping this role as her own.

Her luscious vocals were immediately apparent as she made her first grand entrance down the sweeping, wrought iron staircase, bathing the ear in shimmering beauty while always perfectly controlled and consistent throughout her expansive range, including her knack for shading her uppermost notes to a barely-there pianissimo.

But Blue’s vocal gifts are matched equally by her innate acting skills, with her nuanced portrayal seemingly growing more luminous with each passing scene. She begins her emotional trajectory as a bon vivant who gaily sings of life’s pleasures, morphing before our eyes into a woman of honour who sacrifices her own happiness in the name of love. 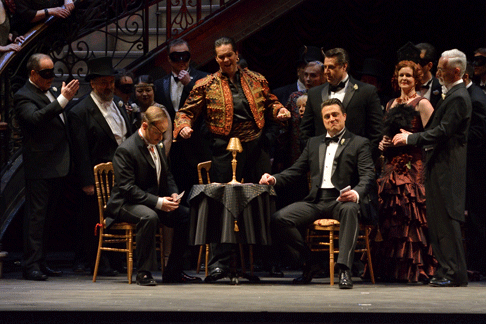 Her delivery of opera’s quintessential ode to freedom, “ Sempre Libera” nearly stopped the show with her character growing more defiant, even punctuating her own vocal line by slamming her champagne bottle at one point, that provided fascinating sub-text. She capped her aria with an enthralling final high E-flat; made even more astounding when delivered lying nearly horizontal on her velvety chaise longue while swilling bubbly.

Another highlight – of many – came during Act III, in which her Violetta grows increasingly desperate as death whispers at the door. Her heartrending “Addio del passato,” sung while tenderly cradling her former cabaret bustier like a babe in arms, followed by a deeply moving duet “Partigi, o cara” sung with Newfoundland-born tenor Adam Luther’s Alfredo elicited sobs in the opening audience, as further testament of her empathic compassion for her character.

Luther in his MO debut also possesses magnetic stage power, as dashing as a matinée idol unafraid to dig into his role, crafted as a passionate hothead in love with Violetta. He also proved a real-life hero for soldiering on despite being under the weather on opening night (as announced from the stage after the first intermission), that nonetheless played havoc in his upper range during Act II’s “ De’ miei bollenti spiriti…O mio rimorso,” and did not allow him to fully project at all times.

Despite these challenges, Luther still displayed buttery smooth phrasing in Act I’s “Un dì, felice, eterea” sung with Blue including ringing high notes, and it’s a credit to his artistry he can still sound so good when not at his vocal best. And in a curious, “life-imitates-art way,” his subdued vocals mirrored the dying Violetta’s faltering utterances, viscerally bonding their characters as organically, simpatico lovers.

Another standout proved to be Canadian baritone James Westman as Alfredo’s father Germont, with his booming voice immediately establishing his imperious character during Act II’s “ Di Provenza il mar, il suol,” as well as showcasing his resonant, expressive vocals. He then proceeded to peel back the emotional onion layers of his character, showing us he is not a villain, but hapless victim of societal norms and expectations, until finally wracked by remorse at the end as he realizes Violetta’s inner goodness.

It’s a joy to see Winnipeg baritone David Watson back onstage – this time as Doctor Grenvil – who always adds gravitas whether performing comedic or tragic fare.

Several curious directorial choices included having the female chorus members, garbed in their flapper finery, performing unison choreography that evoked more a country line-dance hootenanny than free-spirited gypsy twirls during Flora’s party scene. The women’s subsequent donning of bullhorns to their male counterparts’ puffed-up, machismo matadors (wearing crisp tuxedos) also just felt plain bizarre – with any presumed parallels attempted to being made between gay Parisian nightlife and life-and-death bullrings lost in translation. Designer Kevin Lamotte’s unusually dim lighting during this scene helped mitigate the oddness of it all, and once we got past this section, proved highly effective, including several stunning, stylized lighting effects highlighting Blue and her series of white costumes visually underscoring her character’s purity of heart.

Just as there is inherent risk involved when offering edgy new contemporary operas – and this company has been there, done that – there’s also peril when producing an audience-pleasing favourite that can teeter towards predictability. This production happily marries a fresh take with a more traditional approach, but in the end, it is Blue’s show – surely one of this generation’s great opera artists in the making – with Winnipeggers now able to proudly boast, “I saw her when.”

As expected, the artists received a standing ovation with loud cries of bravo and prolonged applause by the clearly moved crowd.