But, this programme at Wigmore Hall, simultaneously a paean to and epitome
of the spirit of late-Romantic ‘sehnsucht’ – aching yearning, wistful
sorrow, poignant reminiscence and bitter-sweet loss – threatened to not
just to take one’s breath away but to transport one away to a world where
the static emotional weight might overwhelm and consume the very spirit of
life.

Goerne and his young accompanist, Seong-Jin Cho, opened their recital, ten
minutes after the advertised start time, with Hugo Wolf’s Drei Gedichte von Michelangelo (1897). These were among Wolf’s
last compositions and the three songs are suffused with the weary
melancholy of unattainable love – as the celebrated painter, sculptor and
poet works by candlelight and reflects on the painful disjuncture between
the artistic creativity which bestows fulfilment and longevity, and human
relationships that are fractured by failure and loss.

At times, such as at the close of ‘Wohl denk’ ich oft’ (I often recall),
Goerne summoned oratorical grandeur – ‘Genannt in Lob und Tadel bin ich
heute/ Und, dass ich da bin, wissen alle Leute!’ (Today my name is praised
and censured, and the entire world knows that I exist!) – and there was
quiet resignation as the voice plummeted at the close of ‘Alles endet, was
entstehet’ (All must end that has beginning). Moreover, though the tempi
were languorous and the spirit laden – ‘Ziemlich getragen, schwerm¸tig’
(sombre and depressed), ‘Langsam und getragen’ (slow and grave), and ‘Sehr
langsam und ruhig’ (very slow and calm) being Wolf’s instructions – an
angry energy whipped through ‘F¸hlt meine Seele’ (Is it the longed-for
light of God) when the poet-speaker’s memories were stirred by rays from
heaven which storm the heart.

But, the prevailing mood, here and throughout the recital, was one of weary
defeat. In these Wolf songs, Goerne’s baritone was decidedly
bass-baritonal in register and colour, and Cho complemented these hues with
dark, sombre, intensely responsive introductions and postludes.

Immediately apparent, also, was the intense sensibility and strong
independent voice of Cho – whose international career was kick-started by
his Gold Medal success at the 2015 Chopin Competition in Warsaw. The
two-bar unison which prefaces the first song was remarkably and
compellingly nuanced; the low semi-tonal murmuring of the second lied
evoked both mystery and fear. Cho isn’t afraid to take his time; nor to eke
every ounce from a mezza voce line. Though the lid of the Wigmore
Steinway was fully raised, not once did Cho make his presence improperly
felt. It was to his credit that, while such painstaking expressivity might
have further burdened the music with torpid solipsism, the effect was in
fact invigorating – the piano preludes, postludes and dialogues injecting
light and life into the sober sequence of lieder. 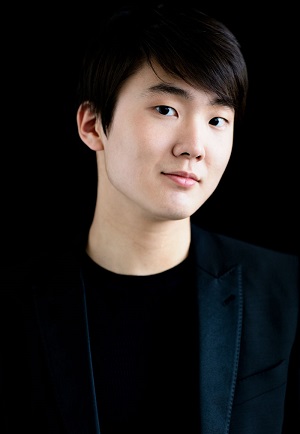 The Wolf songs were followed by eight songs by Hans Pfiztner (1869-1949), a
composer whose opportunistic relationship with the Nazi regime has probably
attracted more attention that his music. The lieder presented here
certainly demonstrated Pfitzner’s Schumann-esque sensitivity to text. But,
despite Goerne’s ability to heighten individual words and phrases – ‘Ich
liebe dich’, first intensified then, at the close, diminished in
‘Sehnsucht’ (Longing); ‘Doch schˆner ist deiner Augen Schein’ (but prettier
still are your shining eyes) in ‘Es gl‰nzt so schˆn die sinkende Sonne’ –
the overwhelming mood was one of a down-dragging lethargy. Admittedly, this
allowed us to enjoy the grainy beauty of Goerne’s lower, bassy, register –
as in the final stanza of ‘Ist der Himmer darum im Lenz so blau?’ (Is the
sky so blue in spring?) – alongside his effortless elision of the musical
phrases.

Again, Cho was an independent voice; the piano part did not so much
complement or enhance as articulate its own strong narrative. Surges
upwards from the bass in ‘Sehnsucht’; exquisite textural clarity in
‘Wasserfahrt’ (Sea voyage); wonderful expansiveness at the opening of ‘Es
gl‰nab so schˆn die sinkende Sonne (The setting sun shines so prettily);
fluent third-based movement in ‘An die Mark’ (To the March of Brandenburg),
which expressed the wonder of the speaker, ‘dreaming like dark eyes, in an
eternal yearning for spring’s realm’. These features gripped one’s
attention just as the light-fingered but niggling clarity of the postlude
to ‘Stimme der Sehnsucht’ (Voice of longing) was affecting.

After the interval, Goerne returned to songs he knows well: Wagner’s Wesendock Lieder which are more commonly heard sung by the female
voice, but for which the baritone made a compelling case for transposition.
If in ‘Der Engel’ (The angel) Goerne’s ‘fervent prayer’ conjured an airy
expansive which lifted him and us heavenward, then Cho’s delicate
accompaniment and playout was truly celestial. There was a vocal strength
and urgency in ‘Stehe stille!’ (Stand still!) which was balanced by the
piano’s self-regarding busyness, and which transmuted to a transfiguring
pianissimo as with remarkably purity and earnestness, Goerne proclaimed,
‘Erkennt der Mensch des Ew’gen Spur/ Und lost dein R‰tsel, heil’ge Natur!
(then men perceives Eternity’s footprint, and solves your riddle, Holy
Nature!).

The meandering of ‘Im Treibhaus’ (In the greenhouse, a study for Tristan and Isolde) was delicately shaped, Goerne’s middle range
effortlessly focused, the lower part of his voice viscerally affecting. The
clarity of line and immaculate intonation at the close was stunning.
‘Schmerzen’ (Agonies) opening with a bitter-sweet smear of harmonic and
vocal anguish; in ‘Tr‰ume’ (Dreams, study for Tristan and Isolde)
Cho’s accompaniment pulsed through the harmonic sequence before
extinguishing itself in dissonance with astonishing delicacy, and the
slightest sequence of expressive ‘delays’ in the piano postlude spoke of an
exquisitely alert sensibility.

Five songs by Richard Strauss – again these lieder are more often
associated with the female voice but were convincingly transposed here –
moving from youthful dreams to fading dusk, closed the recital. In ‘Traum
durch die D‰mmerung’ (Dream into dusk) the ‘lilt’ was just sufficiently
present to be persuasive, and Goerne floated the final phrase into the
divine light – ‘blaues, mildes Licht’ – of heaven’s glow. Cho’s delicate
arpeggiated chords at the start of ‘Morgen!’ (Tomorrow!) offered both hope
and poignant resignation, and the oscillating dissonances of ‘Ruhe, meine
Seele!’ (Rest, my soul!) were paradoxically troubling; here, Goerne’s
strengthening, then softening, of the voice was expertly controlled, as was
the translucent beauty of the image – ‘Und ich geh’ mit Einer, die mich
lieb hat’ (I walk with one who loves me) – at the heart of ‘Freundlich
Vision’ (A pleasant vision).

I’m not sure if it was his intent, but in compiling this idiosyncratically
undeviating and unalleviated programme, Goerne almost seemed to be issuing
a sombre challenge to his audience: if you want to experience the beauty
and truth of these songs, then listen, come, follow me into the hinterland
where this ‘truth’ exists. He beckoned us into the a strange world – a
world of shadows, sensibility, quietude, sweet sorrow – never more so than
in the final lied, ‘Abendrot’ from the Four Last Songs (1948). The
gleam and frailty of Cho’s extended postlude was otherworldly.

But, I’m not sure that we were entirely transported. This was a strangely
‘distanced’ performance, in which the communication that is at the essence
of a lieder recital was both tantalisingly and teasingly present, but just
out of reach. Goerne read many of the songs from the printed scores
positioned on a music stand to his right, and his gaze was at other times
directly into the belly of the piano, to the floor, towards an imagined
horizon. At the close, he stood still and silent as Cho’s piano postlude
trickled away. For a moment, I imagined that the audience might simply,
silently creep away, leaving Goerne and Cho transfixed in that hinterland
to which they had summonsed us – the musicians, like Keats and all the
Romantics poets, subsumed within an artistic immersiveness which is both
necessary and dangerous.

But, no; the frames which, as Virginia Woolf knew, separate, so
frustratingly, art and life, were re-established. Goerne’s fractional
glance towards his accompanist served, like Keats’s ‘Forlorn! the very word
is like a bell/ To toll me back from thee to my sole self!’, to bring us
all back to the present. The spell was broken, the applause began. But the
slight disquiet lingered.