Director Brian Staufenbiel’s production was first seen two years ago at Minnesota Opera. He placed the orchestra on stage with platforms for the singing actors in front of the instrumental musicians.
Rheinmaidens Katrina Galka as Woglinde, Lacy Sauter as Welgunde, and Stephanie Sanchez as Flosshilde, swam in and out of the otherwise-empty orchestra pit. They could not always be seen, but if they were in real water they would sometimes have been invisible as well. As the overture began, projections by David Murakami sprayed across a scrim that provided a background for the Rheinmaidens and Alberich. Water poured down from every angle and Lighting Designer Nicole Pearce’s reflections of sunlight pointed out the precious gold. Costumer Designer Matthew LeFebvre dressed the women in light colors and the men in dark leather.
The green-clad Rheinmaidens worked hard at appearing to swim and dive in the water while singing in exquisite harmony and bantering with Alberich. High soprano Galka is fast becoming a leading lady, and it will be interesting to follow her career. The Alberich, Richard Paul Fink, has been a star performer for many years and it was a joy to watch his keenly-honed interpretation of the dwarf, one of the few creatures who may live on at the end of the final Ring opera, Gˆtterd‰merung. Fink sang with dark chocolate tones that made his character seem the embodiment of greed. 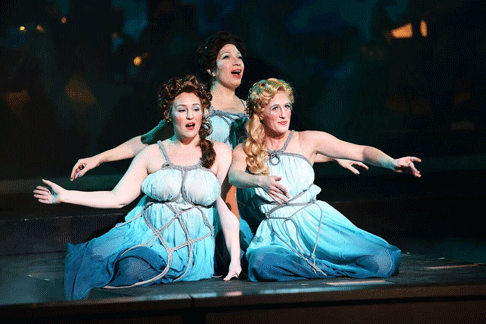 The Rheinmaidens
Onstage almost the entire evening, was Rodell Rosel as the tricky fire demigod, Loge. Like fire itself, Loge never stopped moving, changing, and jumping from one place to another. Even his fingers were constantly in motion. A visual artist as well as a fine character tenor, Rosel was a Loge to remember.
Daveda Karanas was a velvet-voiced, soft-edged Fricka who admitted wanting the new castle to bind Wotan closer to her. I wanted to see her ride in her ram-drawn cart, but she did not have one in this production. As the bass-voiced giants, Fasolt and Fafner, Harold Wilson and Zachary James filled the hall with their deep, cavernous sounds. As Erda, Dana Beth Miller did not have the plum-colored low notes often associated with her role, but she got her point of view across to a troubled Wotan.
Mark Delavan’s Wotan is a well known interpretation. He is much more human than any god should be and we love him for it. As the dwarf, Mime, Dennis Petersen was a conniving creature who would never be trustworthy. Bass-baritone Craig Colclough and tenor John Robert Lindsay as Donner and Froh added vocal pizzaz to the gods’ entrance into Valhalla.
The most interesting new voice in this production belonged to Laura Wilde who sang Freia. There is some history behind her role, too. Caroline Whisnant, who sang Freia in the Flagstaff Ring performances, has gone on to a major career singing leading roles in important European houses. Perhaps something like that will happen to Wilde.
Maestro Joseph Rescigno conducted the Arizona Opera Orchestra using the Gotthold Ephraim Lessing orchestral reduction of Wagner’s immense score and the overall sound was magnificent. Occasionally, there was a blip from a horn or a tuba, but these musicians who normally play Verdi, Puccini and Donizetti, rendered Wagner’s dense score with red-hot passion and constant emotional tension. I do hope this entree into the Ring will bring us other Wagner operas in the near future. There is an audience for them in Arizona.
Maria Nockin