Not until Bellini’s I Puritani and Donizetti’s Lucia Di Lammermoor did the gender disparity between the more
masculine mania and the feminisation of the melancholic become obscured. It
was only at the beginning of the Twentieth Century that opera ceased to
treat madness and insanity as the apex of the operatic mad scene, and more
the full-scale development of its psychological development throughout the
entire span of an opera, as we get in Strauss’s Elektra and Berg’s Wozzeck. With Strauss and Berg, the psychological opera is born.

Philip Venables’s 4.48 Psychosis, drawn from the final full-scale
play of Sarah Kane, is something of a mythological beast. Of all Kane’s
dramatic works, it is the one that comes closest to opera because, of all
her theatrical pieces, it is the one that least fits the description of a
modern play. Written without a dramatis personae, it appears on
the page as a monologue, often seeming to fully scale the heights of stream
of consciousness in the way the words drench the pages. It’s unusually
poetic, too. The words have a soaring, literary beauty to them that are
muscular, but intensely musical: “the capture/the rupture/the rapture/of a
soul… a solo symphony”.

4.48 Psychosis
has often been viewed, because Kane killed herself so soon after it was
completed, as a suicide note – and the unusual structure of the work has
probably cemented this idea as much as any other. However, this is a piece
of drama that blazes with historical awareness of its art form, much as
Venables’s treatment of the text does so as music. Just as Kane embraces
the Theatre of the Absurd of Artaud and Ionescu, and even Beckett, so
Venables looks to the example of a composer like Berg: there are the veins
of palpably dense serialism for the violas, the sudden orchestral flare-ups
on the baritone saxophones, the stark, yet rather tenebrous, orchestration,
the symmetry of two spatially separated percussionists. The threads of this
music can be surprisingly dark, almost as if they are describing the moment
a mind fragments. Venables has been careful to create a symbiotic balance
between the music and the words of Kane’s canvas – so, the percussionists
tap out their notes like Morse code, but there is a rhythm and tempo to the
music that frames the meaning of the text. Every part of Kane’s vast
monologue is composed for – so even full-stops and question-marks are given
a musical equivalent, such as a buzzer or a bell. There are hammers and
saws which articulate the inner voices of a psychotic mind in its bleakest
moments of despair.

Kane herself said that “performance is visceral” and the experience of
seeing 4.48 Psychosis, I think, need not necessarily be wedded to
one’s own experience of mental illness; for many, however, it will resemble
it. Whilst it is primarily about psychiatric disintegration, it is also
about love, albeit the loss of love: “cut out my tongue/tear out my
hair/cut off my limbs/but leave me my love”. Psychosis is an internal civil
war, and this production doesn’t shirk from confronting that conflict. The
use of an ensemble cast – often singing in unison – seeks to define
psychosis through multiple voices and personalities, but it also somewhat
catalyses mental illness into distinct sections. You watch from the point
of view as the victim, as the lover, as a doctor. That love should be
unrequited is connected to the depression experienced: “I cannot go on I
cannot fucking go on without expressing this terrible so fucking awful
physical aching fucking longing I have for you. And I cannot believe I feel
this for you and that you feel nothing. Do you feel nothing?” That “love”
is in some respects a bond between the patient and their doctor – and it is
certainly implied as such in this production where the role of a doctor
figure is given some prominence. But Kane is scathing about the
relationship – and of modern medicine. Zopiclone, Melleril and Lofepramine
are prescribed to restore sanity, but are withdrawn because of the
side-effects; in the end, they simply become the tools of suicide. 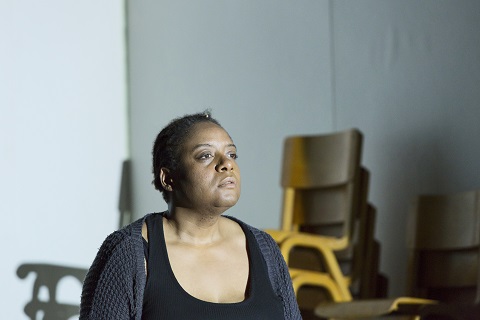 Given the power of Kane’s source material – and the sheer beauty of her
prose – so little needs to be done to develop the libretto for dramatic
purposes. It rather stands on its own. From a musical point of view, the
monologue and fragments of speech probably assume greater vocal colour and
describe more devastatingly the unrelenting despair and “black snow” of
mental decline if taken by an ensemble of voices than if by a single voice
– as they are in Erwartung, for example. Culturally, mania,
insanity and suicide are often questionable – but here the production
embraces them, even if the salient effects of it are to present it in
traumatic terms. Ted Huffman’s production, with its slabs of grey and
nakedly-shone glass doors, is almost entirely vacant – like a mind that has
already collapsed into despair. Colours are entirely neutral. Against the
grey walls are typed out parts of Kane’s play. Despite the utter barrenness
of the production, which works on its own terms, it constantly threw up
literary allusions: Biblical words, and references to Judaism, recalled
Sylvia Plath’s lampshades made of skin, and the final scene with the body
lying on the table reminded me of TS Eliot’s “When the evening is spread
out against the sky/Like a patient etherized upon a table” from The Love Song of J Alfred Prufrock. Neither Plath, nor Eliot,
escaped the devastation of mental illness either. 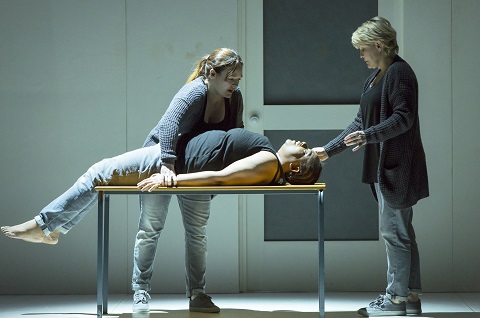 I don’t think one can praise the singing of the Gwyneth-Ann Rand enough.
She sang not only beautifully, but with considerable power and raw emotion.
When she sang “I REFUSE I REFUSE I REFUSE LOOK AWAY FROM ME” you really
believed in her complete isolation and her rejection. It was an utterly
devastating moment. She was ably supported by Lucy Schaufer, Rachel Lloyd,
Susanna Hurrell, Lucy Hall and Samantha Price – all of whom, as an
ensemble, were superbly well-matched. The hive-like nature of the singing,
with the singers rotating the roles of the patient and doctor, gave added
complexity to the voice shadows. Richard Baker, conducting CHROMA, who were
on outstanding form, brought a huge amount of kaleidoscopic detail to the
score. This is music that is deceptively well-balanced – constrained
enough, given the unorthodox orchestration, not to overwhelm the singers,
but powerful enough in scenes such as the 100-steps, where the music takes
on the sounds of computer game music, to be both gripping and sound
menacing. That this music should sound both so rhythmic and yet so flexible
was something of a bonus.

There is enough black humour in this production (though it’s sometimes hard
to see it) to offset the impression its subject matter might be otherwise.
In part, the assumption has always been that 4.48 Psychosis is
Sarah Kane’s bleakest work because it is so inextricably linked to her own
suicide. It is certainly the case that internal dimensions of the play’s
narrative, such as they are, define the very premise of manic psychosis –
and in particular, Kane’s description of madness from waking up repeatedly
at 4.48, morning after morning. Venables and Huffman have given us a very
different perspective on this work than one might expect to see in the
theatre; though, if nothing else, Venables’s 4.48 Psychosis is
simply the most recent, and perhaps most graphic, example of psychological
opera.

Philip Venables: 4.48 Psychosis based on the play by Sarah Kane