Indeed, the lingering damp of the summer storms which had rattled and
racketed London throughout the day might have led to fears that the
audience might be at risk of joining Violetta behind the black curtain
which was laboriously closed during the overture, to enshroud the circular
ante-room to the far-right of the stage.

It is a delight to see Gaitanou and her designer Cordelia Chisholm making
a virtue rather than an issue of the extensive breadth of the Opera Holland
Park stage. Rather than force us to swivel our vision back and forth across
the expanse with the agility of a tennis-match crowd – as was the case with
Marie Lambert’s scenographically inventive-cum-hyperactive production of


last year – or push the action to a narrow fore-stage strip, as did Oliver
Platt last season when directing


, Gaitanou and Chisholm have created a gracious sweep of reflective glass
and decorous greenery: a single set which serves equally well as society
salon or country chateau. As the strains of the overture unfurl, a footman
refreshes the bouquets and un-drapes a chaise-longue. The curtained circle
is first boudoir then conservatory; at the close, quasi-brothel then death
chamber. 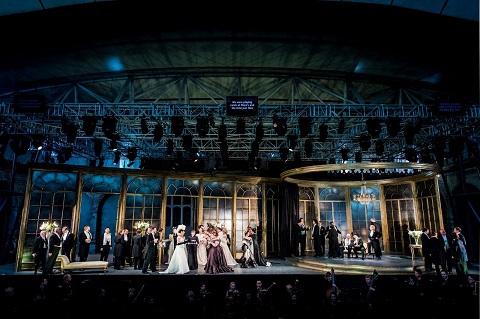 The lack of scenic fuss sharpens the dramatic clarity and colours are
similarly simple and striking. In Act 1 Violetta is helped into a gleaming
white gown by her maid Annina, (Ellie Edmonds) the dazzling purity of which
sets off the blood-splatters which result from her heart-rending hacking.
In the final Act, a black dress signals her doom, while Simon Corder’s
garish lighting overwhelms the day-light lucidity with the ghoulish purple
excess of Flora’s party. The orangery doors come into their own in this
last Act: half-open, they admit both lurid light and tumbling crowds of
raucous revellers – the Opera Holland Park Chorus in fine voice.

In the title role, Lauren Fagan proves as adept as Gaitanou and Chisholm at
commanding the breadth of the OHP stage. Her soprano has real gloss, her
coloratura is shaped with expressive grace and her stage presence is
gripping. ‘Sempre libera’ was gleefully carefree, sparkling with agility
and diamantine shine. Fagan strides the stage with unwavering composure and
even her death-approaching agonies have elegiac elegance.

Many will have been thrilled by Matteo Desole’s ringing and pinging but I
found his Alfredo, although technically very assured, to be lacking in
emotional resonance. There were a few intonation wobbles at the start –
understandable, given that this was the first night in an unfamiliar venue,
and things quickly settled – but Desole has only two volume switches, loud
and very loud, and despite the bel canto ease, the unalleviated boom was
wearisome. This Alfredo seemed emotionally disengaged, an impression
exacerbated in Act 2 when he was more interested in rearranging the potted
plants in his country conservatory than in living the sentiments of his
aria. Despite these misgivings, I can’t deny that Desole’s voice carries
effortlessly and his legato phrasing is luxurious – no mean virtues in this
venue. 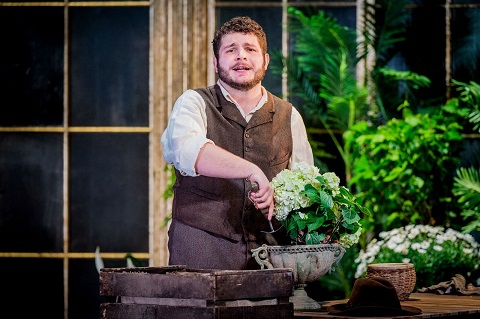 Stephen Gadd’s Germont is unbendingly bourgeois and stern, though he
clearly comes to recognise Violetta’s courtesy and good manners, and
despite some occasional lack of firmness vocally Germont’s confrontation
with Violetta in Act 2 is one of the most dramatically convincing and
compelling episodes of the drama, as Alfredo’s father pushes his son’s
concubine relentlessly towards sacrificial renunciation. In ‘Di Provenza il
mar’, Germont’s nostalgic reminiscence feels entirely sincere. 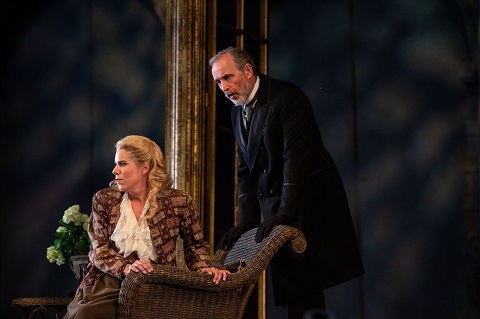 Though the spotlight shines firmly on the central, fraught triangle, the
minor roles all make their mark, for the unfussy staging gives them room to
find their ground and occupy it. Laura Woods is a minxy Flora, her voice
full of colour and lushness; Charne Rochford as Gastone and Nicholas
Garrett’ as Douphol define their characters well.

Although the overture sounded somewhat thin and lacking in sentiment,
conductor Matthew Kofi Waldren encouraged ever more responsive playing from
the City of London Sinfonia and the precision of the playing in the final
Act was complemented by impassioned warmth. Waldren doesn’t hang about and
that only serves to enhance the sure dramatic thrust established by
Gaitanou and Chisholm. 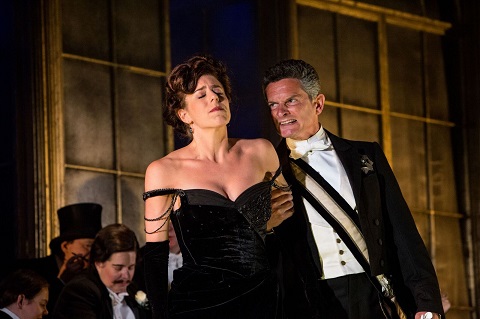 In the closing scene, the reflections in Chisholm’s glass evoke
fore-shadowings of Violetta’s ghostly form – as if she is haunting the
stage even while she still struggles to draw her last, irregular, painful
breaths. The recording of shallow consumptive breathlessness echoes
disturbingly in the memory.

Despite the Parisian partying and pleasures, Gaitanou’s La traviata is permeated with the shadows of disease and death.
Fagan’s Violetta is both frail and fervent; the fever of love and illness
burn with equal intensity. It’s a paradoxically uplifting blend.