The white Palladian faÁade is adorned with intersecting etchings of the
sacred geometry of Freemasonry – the divine proportions of the Golden
Rectangle, the Pythagorean triangles which embody Euclid’s 47th
proposition, Fibonacci spirals whose circles represent the spiritual realm,
and algebraic letters and numerals in a gracious font. We can have little
doubt that in her new production of Die Zauberflˆte for
Garsington Opera, Jones intends to dabble playfully and portentously with
the heraldry and rituals of Freemasonry. As the spritely overture scampers
through its paces, bookended by noble orchestral pillars, Masonic brothers
stride solemnly across the chequer-board terrace, circling the ornamental
hedges and camera obscura, clutching clipboards upon which they scribble
architectural notes and calculations; or climb ladders to make measurements
and markings on the towering walls; or ‘square up’ a design perched on an
easel.

Jones’ beautiful set brings the Garsington garden into the Pavilion. The
mathematical symmetries of topiary, sun-dial, and triangular folly-frames
recall Peter Greenaway’s The Draughtsman’s Contract with its
exaggerated artificiality, numerical and iconographic games, excessive
wigs, costume colour-coding and obsession with optical devices. But,
there’s a dash of Alice in Wonderland, too, in the formal
decorum from which topsy-turvy confusion and troubling ambiguity threaten
to break free.

And, there is indeed plentiful darkness in Jones’ conception; the
surveillance cameras atop the faÁade are a sinister ornamentation, and as
events unfold a surreptitious camera-man monitors proceedings which are
relayed to the CCTV units installed in the Hallowed Hall. 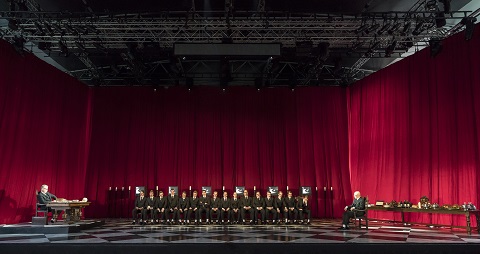 Act 2 takes us into the latter – framed with luxurious curtains of
crimson-velvet and equipped with high altar and table of epicurean
victuals. Behind the high-backed, dark-wood chairs, interspersed between
mounted candles, six pedestalled television screens project the Masonic ‘G’
– in Hebrew called Gheemel (or Gimel), and associated with the numerical
value of 3 – which stand for the God who is Great Architect of Universe and for
Geometry, the fifth science (and also allude perhaps to Garsington itself) upon which architecture and
Freemasonry were founded. The Masonic Eye, too, stares unblinkingly from
the screens, a symbol of the watchful Eye of God and of the Eygptian deity,
Osiris, whose hieroglyphic gaze oversaw the ancient temples.

In Jones’ production, however, such motifs take on the sinister
omnipresence of an Orwellian telescreen. Sarastro is not known for his
feminist liberalism – he warns Tamino against the ‘arrogant’ Pamina: ‘A man
must guide your heart,/for without that, every woman/tends to overstep her
natural sphere’ – and here Freemasonry is more than an esoteric men’s club.
Its Gnostic philosophy, rituals and colour symbolism are overlain with
echoes of and imagery from Margaret Atwood’s The Handmaid’s Tale:
such as the face-obscuring bonnets worn by the hooded women whose labouring
– clearing away wine goblets, wiping the marbled floor, polishing the
imposing wood – sustains masculine privilege and power. A deliberate
impediment, these ‘wings’ act as blinders on the female vision and restrict
communication – a silent seclusion foreshadowed by the scold’s bridle
within which the Three Ladies imprison the indignant, garrulous Papageno. 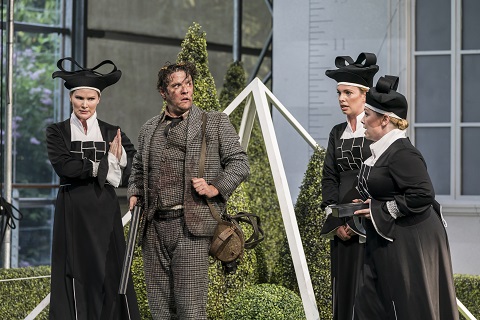 For, darkness and light, good and evil, enlightened and repressed are not
black-and-white categories in Jones’ production. She taps into the
historical conflict between the Masons and the Catholics, drawing upon the
real-life history of one of Wormsley Hall’s former inhabitants, Colonel
Adrian Scrope, who played a pivotal role in the conflict that saw an
English king beheaded, and Jacobite subversion intertwine with papal
condemnation of Freemasonry.

So, the Queen of the Night – bent over an ebony cane and shrouded in black
lace, like a mourning Queen Victoria marred with distorted Pierrot-tears –
clutches a silver chain from which dangles a crucifix and is accompanied by a
red-cloaked Inquisitorial Priest who rudely mis-handles the Holy Books and
Masonic gavel resting on the altar, in defiance of the Master of the
Lodge’s assumption and exercise of power.

Jones largely eschews the pantomime elements of Schikaneder’s conception:
there is no fantastical serpent, rather a salmon-pink pipe which threatens
to drown Tamino in his metal-bath when a hydro-electric initiation rite is
sabotaged by one of the Three Ladies’ mischievous messengers. Similarly,
Papageno is no folksy fall-guy: he arrives, wearing a grubby checked-suit,
clutching a rifle and a cage of dead birds, and during ‘Der Vogelf‰nger bin
ich ja’ skins a rabbit, only breaking off to pounce on an unfortunate
blackbird that lands on the pristine lawn and wring its neck. 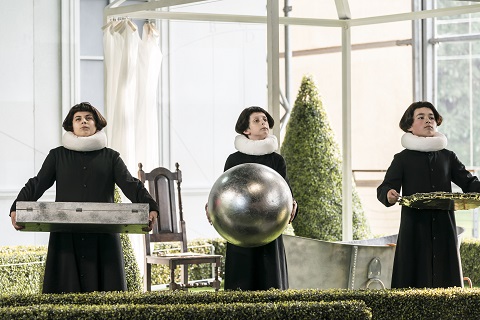 But, there remains a sense of fun and fantasy. The Three Boys, sporting
brutal page-boy hair-cuts and white ruffs, glide elegantly on white
roller-skates amid the maze; the Three ladies whip out an I-pad, rather
than a formal miniature, so that Tamino can admire the Queen’s beautiful
daughter as she frolics with delicate grace.

Jones balances danger and daftness: Pamina’s reddened wrists speak of
suffering, while Monostasos dons a butcher’s apron and is accompanied by a
team of tattooed heavies clutching cleavers and meat-hooks from which
dangle dripping joints of meat. But, through the darkness shine chinks of
light. There are hints of liberation to come when the dulcet strains of
Tamino’s ‘pipes’ – a prototype gramophone replacing the conventional magic
flute – do not charm the feral beast but ‘digitally’ open the windows of
Sarastro’s Lodge and temporarily release the hooded women from bondage,
permitting them a few moments of communion and conversation. The
‘hand-maidens’ sneakily peer at the rituals in the Hall and giggle over the
handsome prince, and at the close Papagena escapes by climbing through a
window to stand astride in hunting boots and orange jodhpurs which match
her gloriously tumbling red locks, flinging a dead bird aside as she points
a hunting gun at Papageno whom she has firmly in her romantic sight-lines. 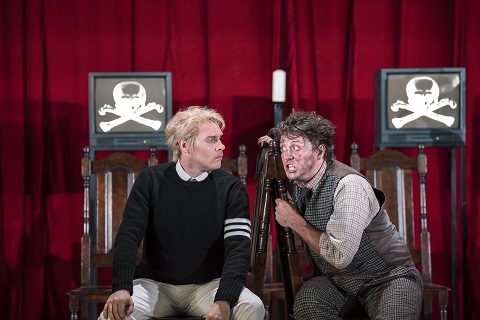 If this all sounds like too many concepts and convergences, then the
strands may well be too numerous and coincidental to cohere with clarity.
But, Jones is aided by a superb cast. Benjamin Hulett’s prince exudes
confidence and poise from the first; ‘Dies Bildnis ist bezaubernd schˆn’ is
suavely shaped with earnestness and purpose, and this Tamino is every inch
the hero. Indeed, he needs every ounce of resolution and reason, for his
be-trousered Pamina, Louise Alder, is no passive heroine. The shining gleam
of Alder’s soprano is complemented by the forthrightness of feisty
self-determination. When Monostatos threatens to drag her back to
captivity, Pamina grabs Papageno’s gun to ward off her abusive assailant
and his mindless gang – a more effective deterrent than the bird-catcher’s
chimes. ‘Ach, ich f¸hl’s’ aches with beautiful limpidity and real anguish,
the falling phrases dropping exquisitely, like delicate gasps of suffering. 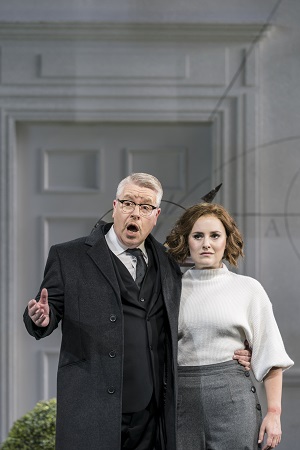 Jonathan McGovern uses his rich, rounded baritone to inject beguiling
character-colour into a Papageno deprived of his customary bumpkin appeal;
this bird-catcher is no fairy-tale huntsman but is full of genuine and
changing emotions. In ‘Bei M‰nnern welche Liebe f¸hlen’, he and Pamina
reflect on the duties of marital love – “higher purpose is our guide,/ and
nothing is nobler than Wife and Man./ Man and Wife, and Wife and Man,/
attain divinity”, a potent contradiction to Sarastro’s misogyny – as Pamina
smartens Papageno up in readiness for romance, picking the dirt and dust
from his jacket, and tidying his hair. And, her make-over does the trick:
at the close, Papageno and his longed-fore Papagena (a sparklingly
vivacious Lara Marie M¸ller) gleefully anticipate the multiplying brood
they will spawn as they stumble out of their clothes with comic enthusiasm
and affection.

As the Queen, Sen Guo impressed with the beautiful fullness of her
stratospheric ascents, more than compensation for an occasional lack of
glinting edge. Her Three Ladies – Katherine Crompton, Marta Fontanals-Simmons and
Katie Stevenson – formed a particular mellifluous trio, the individual voices
distinctly characterised and sweetly blended. Adrian Thompson’s Monostatos
was, if rude of manner, sufficiently eloquent vocally to win at least a
little of our sympathy. James Creswell was stentorian but warm of tone as
Sarastro, balancing menace with benevolence. Any threat that the former
might preside was undercut by Jones’ deft and wry direction: ‘O Isis und
Osiris’ was punctuated by voting rounds, signalled by the orchestra’s
‘three knocks’, in which the brotherhood were gradually cajoled into their
raising hands in agreement, before the soporific effects of wine and
Sarastro’s wordiness led heads to nod. This was typical of the detailed
choreography which characterised the production, and the Three Boys were as
deft at rescuing first Pamina and then Papageno from their suicidal
miseries as they were wicked on wheels.

In the pit, Christian Curnyn largely ignored the weightiness of the
accumulating concepts on stage and allowed the score to run lightly and
fleetly. The weavings of the oboe and clarinet, the enlightened singing of
the flute, the propulsion driven by the bassoon, elegant strings and noble
horns all lifted the spirits. The overture was pacy and though Curnyn
allowed for a little spaciousness at the start, he did not let the spoken
dialogue and sequence of slow-ish arias in Act 2 create a lull.

In this visually enchanting and intellectually thought-provoking
production, Jones interweaves copious ideas into a multifarious concept
which has the sophisticated unfathomability of a calculus equation. But,
that seems to be her point: counter-voices and compromise are the antidote
to oppressive totalitarianism. The ‘cleverness’ never excludes human warmth
and love. And, at the close, the azure blue skies and cotton wool clouds
which beam from the Masonic telescreens push aside the Queen’s nocturnal
thunderstorms – and those cumulonimbus that threatened to deluge the first
night of this summer’s festival – as characters and audience alike emerge
from Alice’s nightmare to return to a more enlightened reality.