It is shockingly exquisite. Following their archaeological investigations
into the medieval past in Written on Skin, the pair have again
delved into the historical archives: specifically, the chronicle of King
Edward II’s obsessive and self-destructive infatuation with his French
paramour, Piers Gaveston. Director Katie Mitchell meticulously and with
microscopic focus show us how such love destroys the happiness of Edward’s
wife, Isabella, and of his court and country. The resultant murders of the
King’s lover, the King himself and, subsequently, his Machiavellian
assassin, unroll with dreadful inevitability, before the ascension of his
son restores ‘order’ to a riven realm.

Benjamin’s orchestral writing is characteristically but still astonishingly
refined and precise. Bass-centred and hollow sonorities dominate: the
echoing eeriness of resonant woodwind, suffused with pain and panic; the
disconcerting strangeness of percussive twangs and bangs; harp-drumming
that makes one’s nerves jangle. A prevailing low register characterises the
vocal writing too, aiding textual clarity: the declamatory lines are
masterfully delivered by the cast (there is not really anything that might
be termed ‘melody’), and when I say I could hear every word, I mean it.
Benjamin has been ably served by Crimp, who knows when to provide elongated
vowels or a telling rhetorical-poetical utterance that can be musically
memorialised. But, Benjamin must take double credit for such textual
clarity, as discerning and judicious an orchestrator – like a painter he
has surveyed a vast palette and selected just a few eclectic hues to
unimaginably emotive effect – as he is orchestral ‘front-man’ with a baton
in his hand. 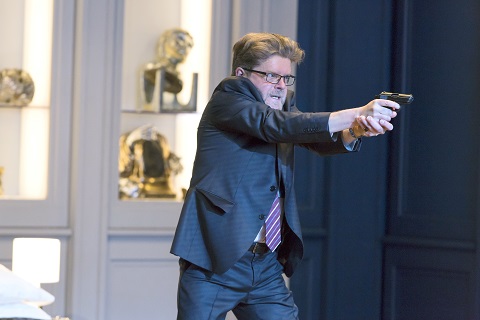 Both human morals and musical hues sink low, which only serves to emphasise
the glistening lustre of Barbara Hannigan who, as Isabel, soars with
stunning sumptuousness and sheen. Similarly, the high-lying lucidness of
tenor Samuel Boden Boy/Young King evinces a penetrative purity and
vision which is woefully absent elsewhere in this poisonous court. StÈphane
Degout’s ‘King’ (no identifier is given) is paradoxically eloquent and
petulant, his faith in his ‘divine right’ imbuing his proclamations of
centrality and invincibility with seemingly impenetrable power. Gyula
Orendt sings with honeyed slickness as the quasi-abusive Gaveston. And, as
Mortimer, Peter Hoare almost out-sings all, willing us to side with his
‘rational’ vision of patriotic equilibrium. 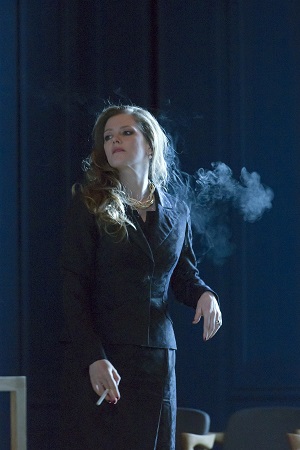 As the opera’s seven scenes unfold, Edward’s children – Boden’s ‘Boy’ and
Ocean Barrington-Cook’s mute but expressive ‘Girl’ – watch all, ring-side
spectators at a rivetingly horrific spectacle. And, we too are voyeurs, as
Vicki Mortimer’s pristine, princely but clinical King’s Bedroom swivels to
afford us a view from each of its four sides. Though Benjamin and Crimp
eschew the third-person fussiness of Written on Skin – where
characters announce their own words, ‘The Boy says …’ – Mitchell’s use of
perspective creates a certain distancing, as from our bird’s-eye eyrie we
watch this rancid world rotate, prey to our appetite for dissection and
scrutiny. 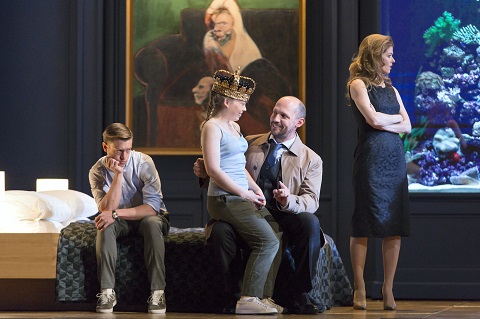 There is nothing ‘medieval’ about the set, and at a time when the whims and
egos of those in power plunge us ever deeper towards apocalyptic abyss,
that seems fitting. One wall of the King’s bedchamber sports an imitation
of an artwork by Francis Bacon, the artist who put pain into painting with
works that foregrounded, savagery, agony and mortality. On another, there
is a fish-tank, initially pulsing with aquamarine and emerald currents but
drained of colour, to barren ash, following the murder of Gaveston. A
show-case of gilt busts, statuary and artefacts attests to the luxurious
licence that wealth brings, and which Isabella rubs in the faces of the
populace in the second scene of the opera when she responds to their pleas
of poverty and suffering by, ‡ la Cleopatra, dissolving a pearl in
wine. Nothing shines brighter than the crown, golden and glowing in its
glass presentation box.

With such glory on show, why did I leave the Royal Opera House feeling a
little dissatisfied? Movement director Joseph Alford frequently uses a
quasi-digital slow motion which is entrancing, as it suspends time, but
also diverting, for this distancing device seems to me to encapsulate one
of the opera’s ‘problems’: there is no dramatic conflict, by which I mean
there are no developing characters, evolving
relationships, changing allegiances, and knotty issues to be
explored, unravelled and resolved. The greatest ‘drama’ occurs in the
instrumental interludes between scenes where the music introduces
conversing voices in ways absent in the sung scenes. Essentially, we are
introduced to a nasty bunch of characters at the start of the opera, and
their nasty end is a forgone conclusion. It is beautifully depicted, in
music and visually, but it is not ‘dramatic’.

Crimp describes the opera as a ‘slightly oblique examination’ of
Christopher Marlowe’s play, Edward II, but there are
echoes of the latter which, when displaced from their original context,
lose their rationale. Crimp explains that what is really striking in
Marlowe is that ‘at the heart of it there is a man who dies for and of
love’, and that this inspired the first line of his libretto: ‘It’s nothing
to do with loving a man, it’s love full stop that is poison.’ To this end,
he borrows one of Marlowe’s most potent lines: when Marlowe’s Mortimer
Junior asks, ‘Why should you love him whom the world hates so?’, Edward
replies, ‘Because he loves me more than all the world.’ At this moment, the
King’s honesty and guilelessness compel us to side with him. But, such
empathy is significant because in the play our sympathies fluctuate. And,
at this point Edward expresses, so simply, our human need for affection.
Elsewhere he is deluded, irresponsible and destructive, but Edward’s final
soliloquy when, with weary despair, he futilely yearns for a moment of
comfort among his friends and poetically anguishes over the torments he has
endured, pushes aside the empty bombast that has preceded; here, at last,
Edward possesses an eloquence worthy of his divine right to rule. In the
opera, there is no comparable variety or dialectic in the King’s musical
utterances, and so the expression of love loses impact and dramatic
relevance. 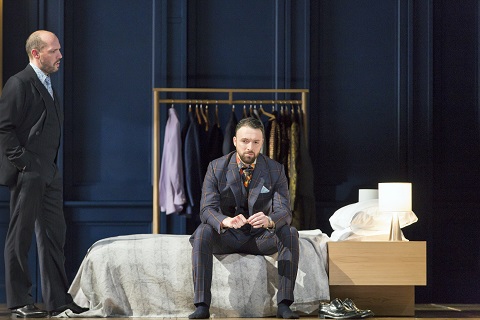 In the opera, Mortimer’s hateful vindictiveness towards Gaveston also lacks
the sort of context that might introduce elements of ambiguity and play
with our sympathies. In the play, the barons dismiss Galveston as a
‘night-grown mushrump’, but the Frenchman has a courtly sophistication
which rebuts their coarseness; but in the opera Galveston is a
quasi-abusive manipulator, and it is appropriate that Orendt returns as the
controlling and heartless ‘Stranger’ – perhaps an echo of Marlowe’s
Lightborn, an amoral mechanical murder-machine.

Marlowe was not interested in the ‘common man’; he ignored Holinshed’s
account of Scottish plundering and a populace suffering from famine –
possible motivation for the barons’ commitment to defence of the realm
through dethronement or regicide – and focused on their personal, snobbish
pique at Gaveston’s ‘common’ origins (not historically accurate). Such
petty superiority makes us side with Edward for all his childish
boorishness. But, in the opera there are no barons excepting Mortimer, and
the populace is a shadow of grey suits bearing clip-boards. Where are the
conflicting arguments that should test our sympathies?

The characterisation of Mortimer is equally problematic. Crimp retains
Gaveston’s malicious inferences about Mortimer’s intent – he is a ‘snout’
poking up Isabel’s skirt – but Mortimer has to bear the weight of the
court’s and country’s ‘reason’. Yet, rather than sliding from coherent
patriotic arguments into impetuous self-aggrandisement, this Mortimer is a
Machiavellian manipulator from the start. That said, while the execution of
Mortimer at the end of Marlowe’s play, following so swiftly upon the murderer’s
heroic avowals of unassailability and immunity, is dramatically necessary
and satisfying, Crimp’s imagined scenario for Mortimer’s hubristic undoing
is perhaps an even more pointed and painful outcome of his self-deluded
profession of invulnerability: ‘ Maior sum quam cui possit fortuna nocere.’ (I am so great that
Fortune cannot harm me) 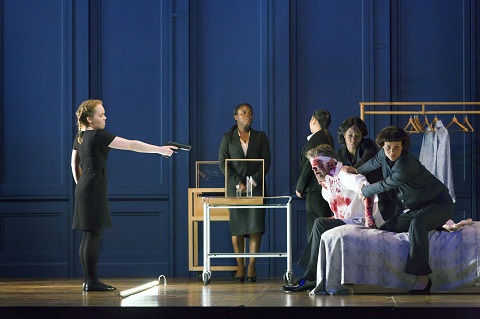 Crimp’s Isabel, too, seems lacking in psychological and emotional ‘layers’.
When rejected by the King she dotes upon Mortimer, and we have a strong
sense of his power over her, but the dramatic potency of the re-direction
of the Queen’s affections relies on us believing in the veracity of her passion
for husband in the first place, and the strength of her self-delusion that
she can regain her husband’s love. Crimp and Benjamin show us Isabel’s
delight in luxury, but not the strength of her marital love. In contrast,
Marlowe’s Isabella rejects the jewels with which Edward bestows her as a
reward for convincing the barons to agree to Gaveston’s return from exile,
and pleads instead for ‘a kiss’ to revive ‘poor Isabel’.

The opera’s seven scenes do not unfold with the logic of a lesson-plan;
rather they are power-point images which illustrate isolated stages on the
protagonists’ journey to pain and purgatory. There is no interrogation of what love ‘is’, why human beings tolerate and execute
violence, or how love and violence come to be so inextricably
bound. At the close, the Boy/Young King has learned only the art
of imitation: how to inflict cruelty, and to argue that the execution of
inhuman brutality is in the name of justice and greater good. Has he learned
self-awareness? How to love?

Lessons in Love and Violence
is musically captivating, but dramatically perplexing.

Lessons in Love and Violence