The very oddity of that list makes it clear why Rubenstein’s heritage is so ill-defined almost 60 years after her death. Everybody knows Boléro (though some blanch at the idea of ever hearing it again); but hardly anybody knows the other vehicles Rubenstein’s commissioning cash created to judge if they’re evidence of anything beyond the dancing diseuse’s Promethean vanity.

Such is Stravinsky’s prestige in our time that had he set Perséphone for two actors, one dancer, and seven musical instruments as he did The Soldier’s Tale, we might know it at least as well as we do that towering masterpiece. But thanks to all that money, he wrote it for a stageful of performers (including an obbligato boy’s choir) and the largest orchestra he ever employed after The Rite of Spring. 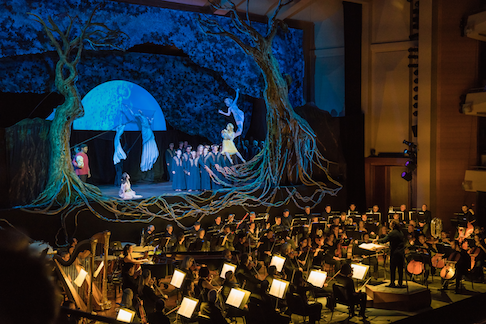 In consequence, Perséphone has ended up on the shelf of pieces that intrigue serious musicians while putting orchestra managers and marketing directors to panicked flight. Performances without star names attached (Balanchine in 1982 New York, Peter Sellers in 2012 Madrid, Thomas Adès and Kirsten Scott-Thomas in 2018 London) have been few indeed.

The more praise to the Oregon and Seattle Symphony Orchestras to take up puppeteer Michael Curry’s visionary proposal for a full staging of the work, and providing the immense resources to do it justice (though Curry’s credits working with puppet-queen Julie Taymor on Disney’s Broadway Lion King, not to mention the Metropolitan Opera and Cirque du Soleil, probably helped a good deal in putting the deal across.)

The depth and seriousness of the staging seen at Benaroya Hall on April 26 goes far beyond the visible. In narrator role of Eumolpus we had Kenneth Tarver, la clarion voiced tenor who starred at Paris’ Opéra Comique in the title role in Auber’s Fra Diavolo. As Perséphone herself (doubled and tripled, by a dancer and a marionette) we had French actress Pauline Cheviller, reprising a role she played in the 2012 revival of Peter Sellars’ Madrid staging, with tenor Paul Groves as her Eumolpus).

With all this going for it, the SSO’s mounting fell well short of perfection. Part of the problem was the evening’s overall program.

It began with a three-minute version of the Song of the Volga Boatmen: Stravinsky arrangement or not, it seemed as out of place as his Circus Polka, commissioned by the Ringling Brothers to accompany their elephant act. 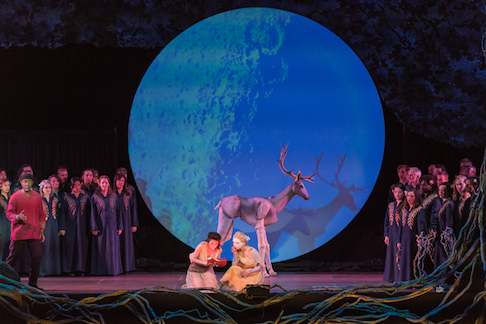 The concerto for piano and winds which followed was brilliantly played by virtuoso Marc-André Hamelin (raggedly accompanied by a clearly underrehearsed band of gallantly willing wind players). As if to emphasize the extravagance of the evening, the first half of the evening ended with the delirious hammering of four grand pianos and 10 wildly chanting Russian voices (the Pokrovsky Ensemble, in fine rowdy form) in the 1923 ballet version of the cantata variously known as Svad’ba/Les noces/The Wedding). Too much, very too much, with Hamelin on first piano, a human cherry on the whole towering sundae.

One inadvertent downside of the musical buffet was that throughout the long first half, we had to look at Mr. Curry’s stage-frame for Perséphone (Being a dedicated concert hall, the Mark Taper auditorium has no wing or fly space for scenery storage).

The longer looked at, the less appropriate it began to seem as a reflection of the work to come. André Gide’s libretto portrays a stylized flowery landscape of spring from which the daughter of the earth goddess Demeter is drawn by pity for the dead to the chilly halls of Hell.

In this staging, hell was already more than halfway here. Instead of the meadow flowers of spring, “caressed by a vagabond breeze,” we’ve been looking for more than an hour at the tangled roots of two leafless trees, their gnarled trunks forming a dark oval in which now rises a pale and chilly moon.

The sun never does rise on this world; and as for flowers, what we get when they do appear are giant, lurid fleurs du mal. Mr. Curry’s marionettes are never less than striking: wispy sheets of ghosts, a crippled deer, the puppet Persephone, eerily human and inert at the same time. But with a large human chorus competing for space with them, they don’t have a lot of scope for action. (At one point, puppet-Persephone seems to be trying to escape the frame and into the reed section of the orchestra .)

Mme. Cheviller is a striking figure as Persephone, statuesque without stiffness, moving with grace. Her unamplified voice reached (barely) to the back of the last balcony, and, thanks to the terse supertitles adapted from poet J.D. McClatchy’s translation, a good deal of Gide’s watery sunshine/moonshine verse comes through despite the general dimness of the visual imagery.

The true magic in this performance, for me at least, was the revelation that Perséphone is not just an awkward experiment, an interesting but anomalous novelty in the career of the man who seems more and more “the composer of the 20th century.” The score is surely the least spiky, glittery original music Stravinsky ever wrote: in his oeuvre the only comparable work is his posthumous collaboration with Tschaikovsky on The Fairy’s Kiss (another Rubenstein commission). Instead it recalls the most abstract, most evanescent works of Debussy: the piano preludes, the veiled subtle sounds of his tennis-court ballet Jeux.

It’s curious coincidence that this season in Seattle, we have seen two daring head-on encounters with works on the fringes of the musical repertory: Berlioz’s opéra comique Béatrice et Bénédict at Seattle Opera and now Perséphone at the Seattle Symphony. Neithe rof them a complete success artistically (though both well-received by the city’s increasingly sophisticated audience), both illuminated the works in question, showing, even when falling short of solving the indubitable problems they present, suggestions of how they might be solved by other equally dedicated artists in future.

For Perséphone, I credit above all the playing of the Seattle Symphony musicians under their conductor of eight years Ludovic Morlot. Working together year after year on repertory reflecting Morlot’s Gallic training and tastes, he has polished his orchestra into an exemplary ensemble, with a sound distinctly its own: not French in sonority, but in clarity, taste . . . ésprit.

I have listened to Perséphone off and on for decades, always performed by first-rate forces; but always too always with conscious effort and little pleasure.

Now, having seen it as well, supporting and supported by in its dramatic context, I feel I have at last captured been touched by the spirit of the work: and despite my strictures of the production, I owe to Mr. Curry and his performers my conviction that, approached on its own terms, may one day stage take the stage proudly on its own.

Perséphone: mélodrame in three acts to a libretto by André Gide