For Lyric Opera’s production the principal roles of Jesus, Judas, Mary, Caiaphas, Annas, Simon Zealotes, Pilate, Peter, and Herod are sung by Heath Saunders, Ryan Shaw, Jo Lampert, Calvin Cornwall, Joseph Anthony Byrd, Mykal Kilgore, Michael Cunio, Andrew Mueller, and Shaun Fleming. The performances are conducted by Tom Deering and directed by Timothy Sheader. Sets and costumes are designed by Tom Scutt with lighting and sound design by Lee Curran and Nick Lidster. Choreography is under the direction of Drew McOnie. The Chorus is prepared by Lyric Opera of Chicago’s Chorus Master Michael Black.
The essence of the New Testament story, as evoked in the Rice / Lloyd Webber version by both music and text, is supported in this production by strong vocal and dramatic performances. Tensions existing over perceptions of Christ are emphasized from the start. The crowds of adherents stream down the theater’s aisles near the start of this production, when they surround and kneel before the central figure. This adulation is questioned immediately in Mr. Shaw’s first solo, “Heaven on Their Minds,” which summarizes effectively the recent differences noted by Judas as “your right hand man.” The familiarity and struggles captured by Ryan’s dramatic portrayal signal, at once, admiration and resentment. The apostles chorus, “What’s the Buzz,” has here the effect of a zealous inquiry despite the admonitions of Christ to focus on the immediate. In his depiction of Christ Mr. Saunders embodies the dichotomy of humanness with an anxious awareness of the coming sacrifice. As such, his disagreements with Judas provide a cautionary reminder, “If your slate is clean,” while hinting at the inevitable dangers about to surface. Into this swirl of conflicts the Mary Magdalene of Ms. Lampert injects a musical and dramatic balm. Her lyrical repetitions in “Everything’s alright” are delivered with a folk-like ease and beauty. Although she addresses primarily Christ in confronting his humanity with lines such as “Try not to get worried,” Lampert’s message of peace is still at this point communicated to Judas as well.

The council of elders, led by Caiaphas and Annas positioned stage front, ponders the danger represented by Christ and a potential following. Lines sung here with a remarkable bass resonance, such as “We’ve not much time,” render Mr. Cornwall’s interpretation an ideal Caiaphas. The choral echoing of the mob, combined with Saunders’ voice opposing the relentless elders during the Hosanna, moves to a crescendo staged as an exciting public ensemble. As a prefiguration of the musical’s conclusion Saunders is hoisted and carryed lying flat before the interaction with Simon Zealotes and the assurances by Christ that “To conquer death you only have to die.” Despite the intensity of the scene in the Temple and the energetic dismissal of the Moneylenders, Mary’s gentle reprise of “Everything’s alright” seeks to mollify the danger in reverberating purification. Mary’s extended solo number, “I Don’t Know How to Love Him” as performed by Lampert, is here a poignant admission of the questioning effect of Christ’s message on the individual. Lampert’s rendition of the iconic lines, “I’ve been changed” and “what’s it all about” echo on a personal level the sentiments of the Apostles from the start of the act. At the close of the first part Caiaphas and Annas have clearly exerted pressure on Judas to yield information, even if Shaw’s Judas declares with repeated vehemence, “I don’t need / want your blood money!” 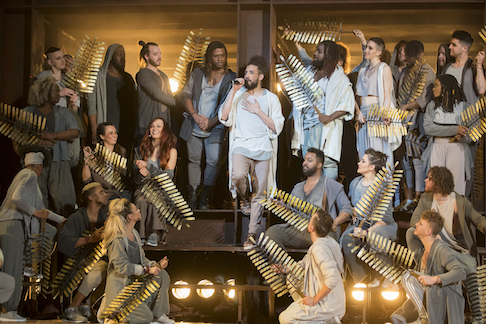 The second part of the musical begins with an imaginative and cleverly staged scene depicting the atmosphere of the Last Supper. As a choral response to the gravity of Christ’s position, the staging of the Apostles singing repeatedly “Look at all my trials and tribulations” speaks to the well-meaning yet uncomprehending naivetÈ of their thoughts for the future. Tensions between Christ and Judas lead to emotional accusations and the preparations for betrayal in Gethsemane. Interspersed in their dialogue is the unchanged refrain from the Apostles, until the choral repetition becomes comic, yet also sad. A return to the seriousness of this Christ’s mission and sacrifice is signaled by Saunders’ powerful recitation of “I only want to say” in Gethsemane. Even here the humanness of the protagonist emerges in the final line, “Take me now – before I change my mind.” After the capture, the trial before Pilate and thirty-nine lashes are staged with glittering effect, just as the theatrical bombast of Herod’s song – performed with true flair by Mr. Fleming – fits into the hyperbole of the second part of the musical. The final scenes and chorus singing the title song remind the audience of the ultimate origins of Jesus Christ Superstar in music. This stage representation of the music and text emerges as one, and indeed a very strong, possibility.
Salvatore Calomino