But, it doesn’t matter if the drama is slight and the characters
superficial when there are moments of real musical beauty and insight, and
when the singing and playing are as fresh – and the commitment so
unwavering – as they were at the Queen Elizabeth Hall where Classical Opera
and The Mozartists gave the second of two London performances of La finta semplice (having begun their mini-tour in Birmingham the
previous week).

Although Classical Opera’s epic MOZART 250 project has reached
1768, La finta semplice was not actually performed until the
following year, in Salzburg, after Leopold Mozart’s plans to promote his
son’s genius before the Viennese was scuppered by the resentment of the
city’s resident musicians at the royal favour bestowed upon the adolescent
upstart. Leopold wrote to Lorenz Hagenauer, a merchant in Salzburg, on 29
June 1768, that his son suffered ‘a full load of all varieties of the most
carefully planned calumnies and malicious persecutions […] envy towers
above us on all sides’. And, he was so incensed by what he perceived as the
duplicity of Giuseppe Afflisio, a Neapolitan, described by Casanova as a
mountebank and deceiver and who was the central figure in Viennese
theatrical life at the time, that he presented a written complaint against
Afflisio during a personal audience with Emperor Joseph II on 21 September
1768 – complaining when he had challenged the impresario about the singers’
repeated requests for alterations to both the libretto and the music, the
incessant delays, the lack of financial recompense, Afflisio had declared
the opera to be untheatrical and unperformable, and ‘finally he left me
with the most shockingly uncharitable utterances: if I insisted on having
the boy prostituted, he would have the opera laughed at and whistled off
stage’.

Such machinations would not have been unworthy of the opera itself. For, it
presents a cat’s-cradle of conspiracies and collusions which see Giacinta
and her maid, Ninetta, gain permission to marry their sweethearts –
Fracasso, a Hungarian captain, and his sergeant Simone – by convincing both
of Giacinta’s two brothers, the women-hating Don Cassandro and
women-fearing Don Polidoro, that Fracasso’s sister Rosina, the ‘semplice’
of the title, is in love with them.

All credit to the superb young cast who brought this flimsy fable to live
with such vivacity, charm and comic nous. Exquisite costumes were
complemented by an eighteenth-century desk and two chairs mounted on square
platforms, first left and right of the QEH stage, and then brought together
in a central, horizontal aisle after the interval. The stage was
atmospherically lit by Mark Doubleday, the tints becoming increasingly
nocturnal as the amorous charades and duplicities deepened.

This minimalism was all that was needed to provide a little context for the
engaging comedy which ensued. The singers’ movements were economical but
deft and fluent; the musical conversations were convincing as the
characters’ betrayed their flaws and foibles. Comic extravagance – as when
Cassandro grabbed a violinists’ bow to ward off Fracasso’s sword in a
mock-duel, or when Rosina tricked him into ‘singing’ a love-duet entirely
in deliberately indecipherable sign language – was indulged but not
over-done.

The Mozartists were seated to the rear of the stage and this did cause some
ensemble problems, as conductor Ian Page frequently glanced over his
shoulder to ‘catch’ singers who were not only some distance away but facing
out to the audience, resulting in some slippage between ‘pit’ and stage –
though Page invariably recouped neatly and, in any case, perhaps it all
added to the dramatic tone of controlled chaos.

But, as Classical Opera return to the QEH twice next year – in January to
perform a musical survey, ‘1769: A Year in Music’, and then in June to
present a double-bill of Gluck’s Bauci e Filemone and Orfeo – it’s something that they might want to re-consider. Also,
and this is in no way a criticism of the company, the surtitles-screen in
the QEH hangs low and large, presumably to obscure – but not quite
succeeding – the blue light of the digital projector set in the rear wall;
the result is that it seems to ‘rest’ rather low above cast and orchestra.
Add in the presentation of the text in a super-size font, and the
libretto’s banalities loomed rather too large. 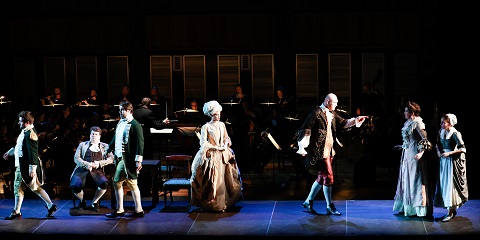 Small logistics aside though, the orchestral playing was excellent. The
Mozartists accompanied proceedings with characteristic energy and
brightness: strings scurried spiritedly and rhythms were always crisp;
there was gleeful punchiness from the horns and both irony and eloquence
from the oboes’ decorative commentaries. In this light, the continuo
playing of Pawel Siwczak (harpsichord), Alex Rolton (cello) and Cecelia
Bruggemeyer (double-bass) was even more impressive: how hard they must have
had to listen to ensure that not one of Mozart’s musical punctuations in
the recitatives – not always predictable and enlivened by action – missed
its mark.

Though the score is fluent rather than phenomenal, the cast ensured that we
appreciated each and every moment when one detects the heart-touching
musical sensibility of the adult Mozart peeking through the adolescent
assurance. Rosina’s soaring Act 2 duet summons to mind the profound
serenity which so powerfully suspend time, and comic capering, in the later
operas, while in the act-finales one can hear the young composer learning
how to increase the dramatic complexity and musical pace of the ensembles
by increments and with slickness and skill. Don Polidoro’s affecting
serenade resonates with a sincere passion which the twelve-year-old could
neither have experienced nor understood. Don Cassandro’s blustering looks
ahead to the disgruntled raging and blundering of Dr Bartolo while the
wily, worldly Ninetta is surely a prototype Despina. Recalling the Count’s
‘Contessa perdono!’, there is an aria of forgiveness at the close, but this
time it’s the ladies who have to apologise and show remorse: and the
musical beguilement works its magic – even Don Polidoro who loses both his
pride and his bride, is prepared to forgive, so tickled with delight is he
by the duping of his brother. 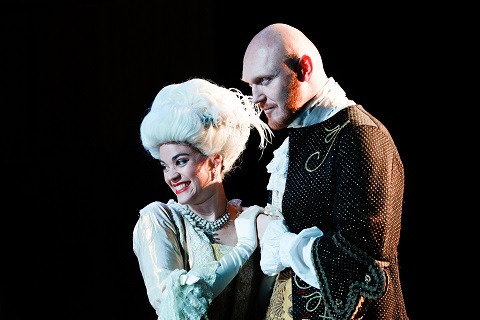 Regula M¸hlemann was utterly enchanting as Rosina: no wonder both Dons were
instantly besotted. She was a perfect faux naÔf, operating with
shrewdness in her duets with her two desperate suitors and relishing
Rosina’s sly manipulations. The soaring lines of ‘Amoretti che ascosi qui
siete’ bloomed serenely and with shapeliness: a delicate vibrato and the
soprano’s silken tone evoked the true sensibility of this supposed
‘simpleton’, while lovely interjection from the violins, violas and
bassoons, paired in thirds, added sweetness and colour.

Soprano Chiara Skerath was similarly impressive as Ninetta, ever clear and
vivacious of voice, and acting with a combination of wit and composure.
Giacinta, whose fear and woe at the hands of her bullying brothers
instigates the proceedings, is then rather side-lined until the closing
act, but Sophie Rennert used her warm, expertly modulated mezzo-soprano
voice to suggest both Giacinta’s anxious timidity and engaging depths of
character that plot and text do not even begin to intimate.

Lukas Jakobski enjoyed himself as the self-satisfied and initially
reluctant would-be seducer, Don Cassandro. His dark, resonant bass was the
perfect fit for Cassandro’s ham-fisted egoism, and if Jakobski occasionally
overdid the hamming, his drunken bewilderment and incompetence certainly
raised a smile. Alessandro’s gentle tenor beautifully expressed the
hapless, hopeless Don Polidoro’s tender but ardent avowal of love, ‘Sposa
cara’. As Fracasso and Simone, tenor Thomas Elwin and bass Boûidar
Smiljani? seemed a little less happy in their military shoes but sang
warmly and with engagement.

Classical Opera continue their exploration of the year 1768 at Wigmore
Hall, where they will perform Mozart’s Bastien und Bastienne on 18 th September – a performance which ties in with the release of
the next recording in the company’s Mozart opera series.