Setting Verdi’s opera in the era of the suffragettes’ campaigning and
Edward Elgar’s paean to ‘Englishness’ – the composer’s symphonic study Falstaff Op.68 was premiered in 1913 – neatly promotes pertinent
‘issues’ but also dilutes, a little, the immediate comic impact of the
out-size peer of the realm, Sir John Falstaff.

Designer Giles Cadle has been eager, it seems, and unlike the opera’s
eponymous protagonist, to stick within his budget. While Falstaff is
pestered in his attic garret by a gothic, disembodied hand which thrusts an
unpaid bill – for “Six chickens: six shillings. Thirty bottles of sherry:
two pounds. Three turkeys … Two pheasants. An anchovy …” – through the
floor boards, Cadle presents us with a cardboard cut-out set which allows
us to take in a long and short perspective of Windsor’s castle and forest,
and to enter some interior dwellings.

We begin in Sir John’s sparse abode above the Garter Inn. The pseudo-grand
double-arch proscenium frame (a nod in the direction of William Tite’s
multi-arched entrance to Windsor & Eton Riverside Railways Station,
perhaps) and the sharp perspective retreat of the central raised, square
platform seems to mock the pretentions of the Knight’s former glories, as
embodied by the portrait of a slightly more svelte Falstaff in Hussar
uniform which leans against the military hut from which the aging knight
bursts with vitality and vulgarity.

This is a world in which feudalism has given way to the top hats sported by
the worthy professionals of the nineteenth-century middle classes, such as
Dr Caius, who is unceremoniously duped and turned on his head – literally,
in the opening scene – and the bowler hats of the up-and-coming lower
orders, such as Pistola and Bardolpho, who hedge their bets with regard to
where their allegiances and labours are best bestowed. The only servant
upon whom Falstaff can depend for loyalty is the young urchin who’s happy
to share a tankard and to do his ‘aristocratic’ master’s bidding – and to
dress up as a somewhat ‘benign’ Grim Reaper in the final scene.

Cadle utilises a rolling backdrop to set the scene. First, we have a vista
which takes in the Thames (in which Falstaff will take an unanticipated
dip, courtesy of the ladies whom he courts) and the castle of Windsor
(loosely based on Turner’s


Windsor Castle from the Thames


c.1805). Next, we are whisked to Tite’s spacious railway concourse, the
platforms of which retreat graciously and extensively under elegant arching
ceilings.

Here, the female members of the Temperate Society gather, bearing banners –
‘Lips that have touched liquor shall not touch ours’ – while Suffragettes
reminds us that only ‘Convicts, Lunatics and Women! Have No Vote for
Parliament!’ The political activity does not seem to bother the inscrutable
ticket officer ensconced in his tiny office; in fact, the dramatic focus
seems to be on the charms of the steam locomotive that will chug and puff
its way across the stage, raising a chuckle or two – and the only dramatic
function of this locale seems to be that it provides a little Brief Encounter sentimentalism for the romantic embraces of
Nannetta and Fenton.

When Falstaff is duped into paying a call to Alice Ford, he finds himself
amid Victorian flock wallpaper and screens, and faux foliage. The allusions
to the detective fiction of the 19th century -the clumsy
detonation of the screens by Ford and his accomplices, ‡ la
Holmes’ fictional foil, the police inspector Mr Athelney Jones – feel
rather perfunctory, just as Falstaff’s secreting of his bulk in the laundry
basket seems a bit laboured, especially as on this occasion he appeared to
get ‘stuck‘ as he slides unceremoniously into the murk of the Thames. The
result is laughs of the glibbest kind, such as those derived from the
assault on Meg’s ‘innocence’ when the Knight, who has gleefully divested
himself of his underwear when donning his tartan and sporran in
anticipation of sexual high jinks, flashes his nether regions at a
delighted/disconcerted Meg.

Cadle’s design reaches its apotheosis in the final Act: the menacing
foliage which creeps in right and left threatens to swallow the evening
forest tryst – ‡ la Richard Dadd – and Falstaff himself is hoisted
aloft, as a sort of Maypole exhibit, an image which is both cruel and
comic.

But, set and design and aside, most of the enjoyment comes, as it should,
from the singers and players. The Philharmonia Orchestra serve up
tip-toeing instrumental delicacies and brash quasi-vulgarities with equal
splendour, under the baton of Richard Farnes. If the coloristic orchestral
onslaught is not always sensitive to the needs of the singers and there are
moments when the vocal lines struggle to fight for space to be heard, then
Farnes is ultra-alert to the ever-changing moods and tempi.

At the centre of the music-drama is Henry Waddington’s Falstaff: a figure
who is wide of girth, proud and assured of his ‘entitlement’, but also
surprisingly sensitive of spirit and judicious of vocal articulation of his
self-worth. Falstaff’s ‘honour’ aria was eloquently delivered – how
pleasing it was to have time to take in the words and their sentiment,
particularly when they are so thoughtfully delivered with expressive nuance
– and perceptively accompanied, and it made its mark. In contrast, the
Knight’s lamentations about the sorry state of the world at the start of
Act 3 did not quite have sufficient space within the accompanying
instrumental medium to penetrate with sufficient pointedness. But, this was
a Falstaff who wanted us to think, rather than guffaw, and that’s no bad
thing. 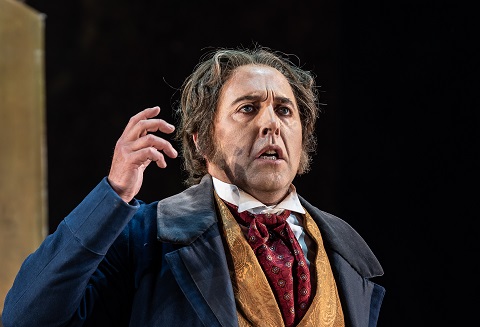 Richard Burkhard’s Ford was a compelling figure of rage and revenge, and
his vendetta aria, ‘» sogno o realt‡?’, conjured real threat and menace. I,
for one, wouldn’t want to cross him. As his wife, Alice, Mary Dunleavy was
a bright star, evincing smile-inducing guile and girlishness, complemented
by intelligence and ingenuity – all conveyed with vocal assurance and
plushness of sound.

Victoria Simmonds’ Meg Page was fittingly uptight, with an undercurrent of
mischievousness; Soraya Mafi’s Nanetta and Oliver Johnson’s Fenton reminded
us that there are real human emotions and lives at stake.

The only downside of this direct and compelling production was the
unanticipated and unwelcome intrusion of the hedonist thumping and twanging
of a nearby pop concert, carried by the brisk wind from outside the Wormsley
estate to the opera pavilion, which, in particular, marred the magic of
Soraya Mafi’s nocturnal serenade. Goodness knows what the Fat Knight would
make of such a discourtesy.