But, that’s the gauntlet thrown down by Pietro Mascagni and librettist
Luigi Illica, in their 1910 opera, Isabeau – and one that must be
picked up Martin Lloyd-Evans when

presents Mascagni’s medieval melodrama next month. Illica’s
libretto is a variant on the Lady Godiva legend, which transmutes the naked
progress from self-sacrifice to punishment – when Isabeau refuses all of
the suitors whom her father, King Raimondo, has gathered to compete for her
hand in a tournament of love – and swaps the voyeuristic Peeping Tom (who
disobeys Godiva’s plea for all the townspeople to stay indoors and avert
their gaze) for an innocent country lad, Folco, who is imprisoned for his
visual trespass. Though he wins the chaste princess’s heart, when she
visits him in his prison cell, her pleas to her father for clemency come up
against the cunning machinations of the Chancellor, Cornelius. It’s not a
romance that is destined for a happy ending.

An American premiere was originally planned for Isabeau, with
soprano Bessie Abott as the eponymous princess, but financial support was
not forthcoming, and the opera was eventually first performed in Buenos
Aires, at the Teatro Coliseo in June 1911, conducted by Mascagni and with
Maria Farneti and Antonio Saludas as the doomed lovers. Performances at La
Scala and La Fenice the following year were well-received, and the opera
stayed in the repertory of many Italian houses before gradually fading
after a couple of decades into near oblivion. Critical opinion has proved,
on the whole, negative: William Ashbrook dismissed the opera as ‘trite
bombast’, while Michele Girardi’s Grove article, complains that
‘the opera depends too much on 19th-century devices whose forced rhetoric
is often evident; similarly, the attempts at musical sophistication in the
work fail to conceal its essential conservatism.’

But, in an interview, Mascagni professed that, ‘With Isabeau I
attempted a return to that romanticism which inspired so much Italian
opera. It seemed to me that in the lyric theatre, verismo, of which I
myself was a fervent follower, had had its day’. He looked upon the opera
as ‘something entirely new’, and this was the question I posed to tenor
David Butt Philip, who takes the role of Folco in OHP’s forthcoming
production: is Isabeau hackneyed, histrionic verismo or is it
something fresh and new? 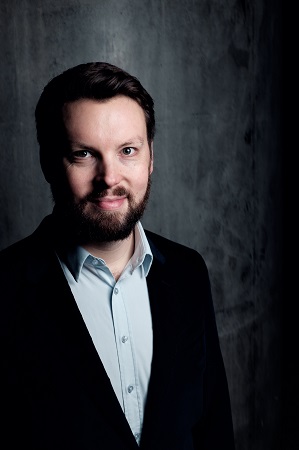 David Butt Philip explains that, far from being clichÈd convention, the
harmonic language of Isabeau suggests that this was a composer who
had heard Salome and the early music of Strauss, and who was
beginning to explore new paths and idioms of a distinctly ‘modernist’ bent.
The opera by Puccini which it most readily brings to mind is Turandot, composed more than ten years later, and particularly the
third act which was ‘completed’ by Franco Alfano.

It’s not so much the vocal lines which seem innovative, rather the
orchestral language, which prompts me to ask David about the challenges of
singing a role which so often, as he observes, lies consistently just above
the break in the voice, even if it does not rise to stratospheric peaks.
Indeed, it has been suggested that it’s the difficulty in casting two
singers who are capable of sustaining the soaring lines of the arduous
leading roles that has contributed to the opera’s languishing. In fact,
explains David, Mascagni helps the singers to pace themselves: the warm-ups
to the most muscular bursts of vocal activity are skilfully structured,
and, at least until the demanding final Act with its extensive duets, there
are ‘rest breaks’, so to speak. But, the tenor does feel that this is
perhaps why Isabeau doesn’t appear often in the repertory, as
smaller houses and festivals may find the casting demands prohibitive; and,
the tenor thinks that he himself would be reluctant to sing the role of
Folco in one of the larger houses. So, the opportunity to participate in
the OHP production is greatly welcome; the verismo repertory clearly feels
‘entirely natural’ to David, who in 2016 sang Luigi in Opera North’s Il Tabarro.

Alongside the Intermezzo (Mascagni termed it a ‘hymn to the sun’) depicting
Isabeau’s naked ride, the musical peaks of the opera are the two arias for
each of the principals and the final duet. Is the opera rather ‘static’,
dramatically, I wonder? David admits that there are some dramaturgical
challenges: there are sections where there is little action – such as at
the start of Act 2, as Isabeau prepares for her ride – which need careful
consideration in the theatre, but also passages where the plot moves along
very quickly, in ways that are not always presented through explicit action
or text. For example, there are minor characters, such as the anonymous
knight, who are not fully delineated but who play a vital part in the plot,
and who intimate a back-story of which the audience are unaware. We might
well be familiar with the ‘back-story’ of Figaro after more than
200 years, but Lloyd-Evans and the cast are having to reflect upon how to
ensure that essential points of detail are communicated even if they are
only briefly or implicitly articulated in text or score.

David’s enthusiasm for, and conviction in, Isabeau is compelling:
it’s an opera, he tells me, not concerned with mythology or philosophy, but
about real human beings with tangible, credible emotions. Rather different,
then, from the literary starting-point of Brett Dean’s Hamlet
which David performed (as Laertes) at Glyndebourne Festival Opera last
summer, taking the title role during the

subsequently. As David concurs, even selecting just 25% of Shakespeare’s
four hours’ worth of dramatic text, would have proved too lengthy and
unwieldy, so Dean and his librettist Matthew Jocelyn took an early decision
to fragment the original text and largely remove it from its philosophical
context. The result was an opera that must have confounded the expectations
of many opera-goers, who thought that they ‘knew’ Hamlet, by
presenting them with an opera which subverted Shakespeare’s drama from its
very opening phrase – a fragment of the play’s most famous line, which is
only heard in its entirety when uttered ironically by one of the Players –
and forcing them to take the opera on its own terms.

David admits that the directorial team and cast were slightly anxious going
into the dress rehearsal: ‘We had no idea if it was any good!’ They thought
it was, had worked so hard, had the faith of the Glyndebourne management
behind them … but what would the Glyndebourne audience, many of whom may
not be regular opera-goers, make of it? Fortunately, “they immediately got
it!” And, David was surprised that it was often those who were less
experienced opera-goers who responded so strongly to the theatricality of
the work. Certainly, that was my own experience of hearing a tour
performance in Canterbury. I’m often a little hesitant when approaching an
opera based on an existing literary work which I know well, but on this
occasion, although the excision of Hamlet’s soliloquies did alter our
conception of his psychological development as a character, Jocelyn and
Dean created a Hamlet of immediate and escalating intensity, and the result
was dramatically compelling – a view clearly shared by the Canterbury
audience-members around me, who may well have chosen to attend the opera because it was ‘Hamlet’ but who evident enjoyed being
served up a performance that ‘wasn’t’. 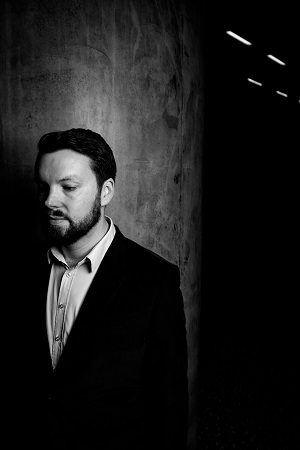 Inevitably, I ask David about the challenges of swapping roles between the
Festival and Tour. He responds that singing Hamlet on tour was not
difficult – after all, he knew the opera and production well by then;
rather, it was performing the role of Laertes during the Festival, while
simultaneously under-studying Hamlet, which gave him ‘a few sleepless
nights’. Having received the score a little later than anticipated, and
while he was making his debut in the role of Erik in Der fliegende Holl‰nder at OpÈra de Lille, David had to learn the
role of Laertes in the single month after the Lille performances had
finished and before Glyndebourne rehearsals began, and then get to grips
with Hamlet ‘on the job’, as it were. Rehearsing as Laertes in the mornings
and then returning in the evening to sing Hamlet’s music was exhausting;
and the pressure was increased as the role of Laertes turned out to be
larger than he, or probably Brett, anticipated. He obviously immensely
enjoys the ‘theatricality’ of Brett’s music though, and in March this year
joined Allison Bell and the Radio Symphony Orchestra Berlin under the baton
of Vladimir Jurowski to sing Dean’s From Melodious Lay, an
orchestral poem which explores the relationship between Hamlet and Ophelia,
and which was re-worked in to the score of Dean’s opera. Though Dean’s
music is not so obviously vocally satisfying as Mascagni, for example,
David admires the dramatic interest with which Dean injects his vocal
writing and his skill in producing precise and exciting effects for the
voice.

Our conversation moves on to future plans, one of the most interesting of
which is ENO Artistic Director Daniel Kramer’s staging of Britten’s War Requiem in November. David has “no idea what to expect!”, but
the score is inherently and intensely dramatic, and Wilfred Owens’ texts
offer copious, often disturbing, visual imagery. Designed by Turner
Prize-winning artist and designer Wolfgang Tillmans, this is going to be
one of the ‘not to be missed’ cultural events in the capital this autumn.
David has ‘warmed up’ with performances of the Requiem with
Orquestra Sinfonica Portuguesa and OpÈra Orchestre National Montpellier
this year. At ENO he will perform alongside Roderick Williams and Emma
Bell; and, interestingly, the conductor will be Martyn Brabbins, under
whose leadership a young David Philip Butt performed the Requiem
as a chorus member in his student days, an experience which clearly
initiated a growing passion for Britten’s dramatic music – one which was
nurtured this year in Madrid, where David sang the role of the Earl of
Essex in Sir David McVicar’s new production of Gloriana. It’s an
opera I feel is woefully under-rated, and David agrees: it’s a more
‘angular’ work, and the libretto presents challenges to an audience – the
characters, particularly the Queen, can seem distanced and difficult to
engage with. But, the two scenes for Essex and Gloriana are stunning – as,
I suggest, is the musico-dramatic structure of the final Act, to which
David adds the impact of the trumpeters in the opening scene. Having
appeared in just a single scene, as the Master-of-Ceremonies, in Richard
Jones’s

– during his time as a Jette Parker Young Artist at the Royal Opera House,
David clearly relished being involved in McVicar’s production, which he
describes as a ‘real revelation’.

Looking ahead, David will sing Verdi’s Requiem with the Royal
Philharmonic Orchestra under conductor Jac van Steen at the Royal Albert
Hall in November, and then take the role of Froh in Das Rheingold
at the Teatro Real in Madrid in January 2019 – a role he performed
at the Tanglewood Festival in July 2017. As for his ‘wish-list’, perhaps
first ports of call might be Cavaradossi or Lohengrin. But, it’s clear
that, further ahead, Britten is where the heart lies: namely, Grimes and
Vere. Let’s hope the casting directors are taking note.

Isabeau
is being performed at