proved something of a flop, there has been much to ponder and indeed to
inspire from

Krzysztof Warlikowski’s From the House of the Dead


Lessons in Love and Violence


. David Alden is perhaps not the most obvious directorial choice for
Wagner, though his ENO Tristan – the first I saw – certainly had
its merits. He pretty much had the field to himself, though, given that
Covent Garden’s previous staging was the lamentable fancy-dress pageant
served up by Elijah Moshinsky, its final reheating coming

. On the face of it, Alden’s move to the 1930s must have come to a shock to
the more reactionary elements always present in a Wagner audience. That it
does not seem to have done so suggests either a welcome opening of minds or
something – at least, according to one reading, like Lohengrin – rather
less substantial than one might have initially presumed. 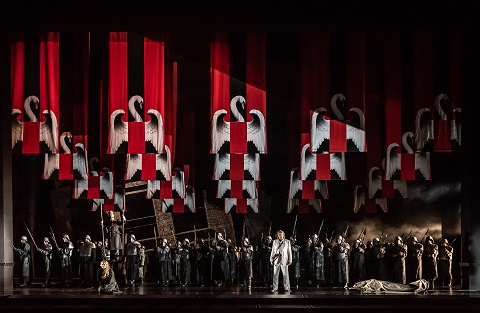 I wish it had been the former but Alden’s production ultimately proved
conventional, all too conventional: more a potential shell for something
more interesting than a remotely finished – even ready – production in
itself. Designs and some stage direction, notably that of the chorus, are
suggestive, but where is the dramatic grit? To offer a Lohengrin come as
redeemer to a society broken by war is of course to follow Wagner
precisely; to shift the actual war to something closer to our modern
concerns is no bad thing at all. He unifies a people in disarray through
his charismatic authority, yet ultimately cannot fulfil his duty and
rejects his people.

Nazi parallels, or rather premonitions – like Marx, Wagner is often at his
very strongest in pointing to where the twentieth and twenty-first
centuries would go wrong – are obvious, yet none the worse for that. Even
that level of critique will, after all, stand as a rebuke to those who
follow that disingenuous old Nazi, Curt von Westernhagen, railing against
the fresh theatrical wind of the 1970s: ‘Directors who deem themselves
progressive when they transform the Ring back into a drama with a
“message” have no idea how regressive this approach is in relation to the
genesis of the work itself.’ Westernhagen’s scholarly methods are now as
discredited as his ideology. Disciples remain, though, and few things get
them so hot under the collar as Nazis on stage.

That said, simply to update is never enough. Indeed, it is to adopt the
Westernhagen fraternity’s strange delusion that a production more or less
is its designs (here, handsome indeed, for which great credit should be
accorded to Paul Steinberg in particular). In many ways, when and where
something is set, or is not, is the least interesting thing of all; at
best, it is a starting-point. Save for that arresting, almost cinematic
(Riefenstahl at a push) direction of crowd movement, its dramatic import
obvious yet undeniably powerful, there is not much to get one’s teeth into.
If the setting remains largely undeveloped, too much also seems awkwardly
reminiscent of other productions. Had you never seen a German Lohengrin, you might remain, often literally, in the dark; Wagner
and indeed many in his audiences surely deserve greater credit than that. 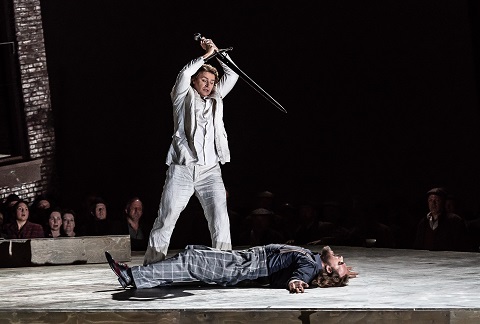 is one thing, but a falling of banners for war that aped the close of the
second act of

is another again. If some point had been made about Wagner, the Nazis, and
Bayreuth, it might have worked, I suppose; here, it seemed gratuitous and
frankly derivative. What the point of describing the pages as ‘four women
at the wedding’ may have been I do not know: if you like that sort of
thing, then that will doubtless be the sort of thing you like. A sudden
design apparition from Neuschwanstein seems merely a change of scene.
Again, one can see why such an image might have a point in a fascist, even
Nazi, setting, but it needs at some level to be made, not merely assumed.
Dramatic motivation, then, largely eluded me. Such irritations pointed to a
greater problem: a conceptual weakness at the heart. I suspect it can be
remedied: if a shell, it is a fine shell. It will not, however, remedy
itself.

Perhaps the same once had been true of Moshinsky. At any rate, this evening
shared something else important with that final outing of 2009: musical
excellence. Andris Nelsons, who conducted Neuenfels’s production at
Bayreuth, was not at his strongest here, especially in the first act.
Indeed, there both Nelsons and Alden seemed intent, consciously or
otherwise, to underline what can often seem to be its rather static nature
rather than to enliven the drama. However, Nelsons drew increasingly lovely
playing from the orchestra, lower strings and woodwind in particular, and
made often quite extreme second-act rubato – not to be confused with tempo
variation – work, rather than seem merely mannered. His command of the
architecture in the second and third acts impressed. Still more so did the
outstanding singing from the chorus and extra chorus. William Spaulding’s
work here is clearly reaping rewards, just as it did at

Klaus Florian Vogt’s Lohengrin is a known quantity: known also, of course,
to Nelsons from Bayreuth. I am less enthusiastic than once I was: the
purity is less consistently apparent, the blandness more so. (Or maybe I am
just tired of it.) However, it remains impressive on its own terms; one’s
response to his singing will perhaps be more than usually personal.
Replacing the originally advertised Kristine Opolais, Jennifer Davis
impressed greatly as Elsa. This was by any standards a high-profile debut.
Vocal and dramatic sincerity were matched by a security one had little
right to expect. Thomas Johannes Mayer, also of recent Bayreuth fame, more
than hinted at a properly complex Telramund, even if his artistry received
little help from the staging. Christine Goerke’s Ortrud climaxed in
properly blood curdling cries at the close, although again I had the
impression a deeper production would have brought out something – well,
deeper. Georg Zeppenfeld did what he could with the Neuenfels King-redux;
that again was impressive indeed. Only Kostas Smoriginas, as his Herald,
disappointed: often uncertain of verbal and musical line alike. 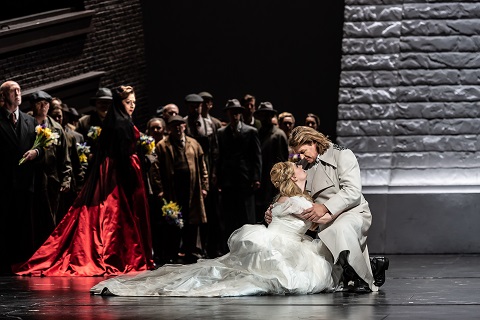 The audience, part of one’s experience whether we like it or not – unless
one happens to be Ludwig II, and even then… – proved something of a trial.
Someone’s telephone vibrated throughout the first minute or so of the
first-act Prelude, the culprit eventually shouting ‘Yes! I’m going to turn
it off’. A friend heard someone else announce upon Lohengrin’s arrival: ‘I
prefer it when he wears golden armour.’ Coughing, electronic terrorism, and
inanity aside, they seemed to like the production: rarely a good sign.
Given what they will boo… Still, there is, I am sure, room for something
more to take shape within its framework; perhaps they will do so then.
Moreover, there is, I assure you, a genuinely exciting prospect for the new Lohengrin at Bayreuth this year. At least on this occasion, my
lips must remain better sealed than Elsa’s. The world, however, is likely
to see a worthy successor to Neuenfels from Yuval Sharon, in a production
that penetrates more deeply to the work’s essence and grapples with its
implications.