There’s nothing very pastoral, though, about ENO’s Acis and Galatea which, as the Coliseum is hosting a series of
summer revenue raisers (

arrives next week), is being performed at ENO’s rehearsal space, Lilian
Baylis House. The only ‘greenery’ in director Sarah Tipple’s
hyper-active production, is the astro turf beneath the feet of the
orchestra, seated to one side in a mirror-clad grotto which does its best
to hint at leafy groves and trickling streams.

Designer Justin Nardella’s set presents a panoply of party-props – a livid
yellow fancy-dress box (though the merry-makers’ Hawaiian shirts, wellies,
out-size spectacles and outlandish head-gear are surely ‘fancy’ enough),
beach balls, plastic dinosaurs, inflatable unicorns, and the like. And,
should the ‘hedonism’ over-heat, the party-planner – a nerdy type, who
wanders in from time to time, checking his itinerary on an i-Pad – has
ensured that they have a convenient cool-drinks dispenser at their
disposal.

The revellers are social media techies, and these self-regarding
selfie-takers are kept doubly entertained as they watch their own carousing
and cavorting unfold via four corner-stationed, huge i-Phones. During the
party-games, Galatea is ‘crowned’ Queen and draped in ermine. As she and
Acis canoodle, ‘O happy we!’ the members of the ENO Chorus sing, in hearty
and joyful voice, as they swig beer, dance with unselfconscious abandon,
and flop on bean-bags for a time-out. Indeed, perhaps they’d swigged a few
too many bottles for the choric cries of glee drifted a bit behind
conductor Nicholas Ansdell-Evans’ swift beat. 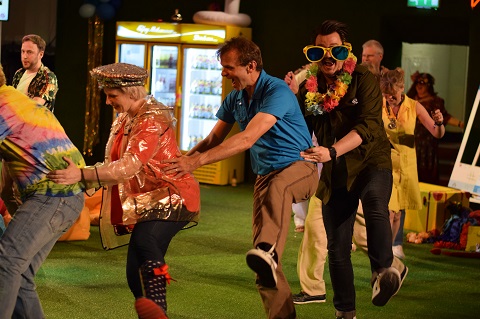 There’s nothing wrong at all with Sarah Tipple’s decision to eschew Ovid’s
pastoral paradise and John Gay’s satirical lampooning, and to present the
mythical romance as a slight tale of modern-day merry- and mischief-making.
After all, Acis and Galatea began life as an entertainment for a
private party, commissioned c. 1718-20 by James Brydges, Earl of Carnavon
and later Duke of Chandos, to amuse the guests at Cannons, the stately home
on his grand Middlesex estate. And, in contrast to Martin Parr’s production
of the opera at St John’s Smith Square, during this year’s London Handel
Festival, at least this time the balloons stayed firmed affixed to the
walls and ceiling, sparing us an explosive accompaniment.

But, as I noted in my review of the LHF performance, while there is ‘much
irony in Gay’s text, with its parodic echoes of nonsensical Arcadian
conceits and interplay of ‘high’ and ‘low’ […] the challenge is to
distinguish between, and marry, textual levity and musical earnestness’.
And, it’s this unity and balance between partying and pathos that Tipple
doesn’t succeed in achieving.

When the party ends in the inevitable punch-up, and the Chorus laments the
death of Acis, the party-planner rushes in, puts Acis in the recovery
position and hastily commences CPR while the stunned revellers prove not
sufficiently shocked to refrain from recording the victim’s last breaths
for their Facebook page. Though it was a welcome moment of tender stillness
after all the manic agitation, the opera’s ‘high-point’, the choric lament
‘Mourn all ye muses’, which is sung over the body of the slain Acis, lacked
gravitas and true sentiment; the poignant simplicity of “The gentle Acis is
no more” seemed merely glib. 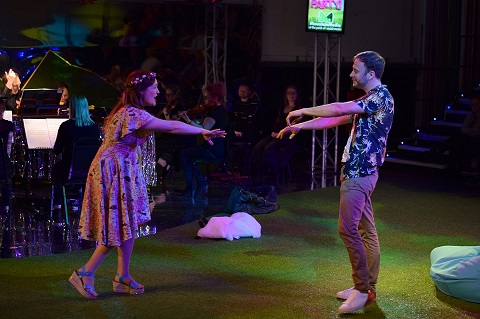 There was some fine playing and singing, though, not least from the ENO
Chorus, though the traverse set-up made it hard for the choral and
instrumental groups to blend. Alexander Sprague, as Acis, had plenty of
spring and slice in his pleasing tenor, perfect for this confident charmer
dressed in glitter-red sneakers and cool shades who was prone to showing
off his press-up prowess mid-aria. Indeed, perhaps this Acis was a bit too
self-regarding for at times it was hard to believe in the sincerity of his
love – a distrust which was exacerbated when the cynical Damon rolled a
cigarette during Acis’s avowal of love.

Lucy Hall’s soprano is vibrant, full of rippling colours, relaxes and
blossoms as it rises. She was terrific as the flirtatious Galatea, whose
cocked eyebrows suggested was she was quite tempted by Polyphemus’ ardent
attentions. 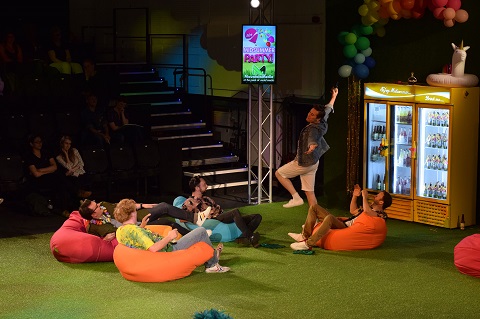 Bradley Smith was a good foil to Sprague. His tenor has a softer edge, just
right for party-pooper Damon, demure in denim, though his singing was not
always sufficiently agile in the coloratura passages to keep up with the
terrifically bright and brisk playing of the instrumentalists from the ENO
orchestra, who were whipped through their paces with gleeful lightness by
Ansdell-Evans.

Though this Polyphemus was no monstrous Cyclops, Matthew Durkan injected
some beguiling darkness into his baritone. It was a shame that the vocal
menace was rather undercut by the petulant antics that Tipple had him
perform. When Galatea rejected his regal advances, he tore off his cloak in
a fit of pique and stamped like a three-year-old on his plastic crown. Worn
out by his toddler tantrum, Polythemus threw himself down on a pink pillow
and promptly fell asleep, affording Acis and Damon the opportunity to creep
back in, paint his face with marker pen and lipstick, and strap him into a
lurid green bra.

Tipple thus denied this Polyphemus any dignity, and we did not feel the
immensity of his burning love, only his peevish anger. She also struggled
to squeeze the opera’s ending into her concept. For, in Ovid’s tale, when
the jealous Polyphemus has crushed Acis to death under a boulder, the
distraught Galatea fortuitously recalls her divine powers and transforms
the dead Acis into a stream, thus granting him immortality. Clearly there
could be no such transfiguration by water of this dead party-goer. The
solution? A stream of ‘pictures of a life’ on Galatea’s Instagram account
and a flowing conga-chain of dancers. With the prone body of Acis before
us, this lieto fine left slightly a nasty taste.