Even though the journey is now a bit of a pain for me, it is always a joy
to visit the Hackney Empire, infinitely preferable to the other of Frank
Matcham’s London theatres that is sometimes used for opera. The quality is
often very high, the location seemingly inciting visiting companies to
their best; I am not sure I have ever seen a better Marriage of Figaro than that from the

Royal Academy a couple of years ago

. Not only bringing opera to Hackney but also taking it out of the West End
is a very good thing; it genuinely seemed to have attracted a new, highly
appreciative audience, half of which offered a standing ovation (something
even Bernard Haitink receives less often in London than he does). The idea
of an opera set in the Hasidic Jewish community was enticing too. I had no
idea what to expect from any part of it, which always adds to the
anticipation. Moreover, performances from all concerned were excellent, the
Aurora Orchestra under Jessica Cottis perhaps the greatest stars of all.
One had little doubt that one was hearing what one was supposed to hear.
Gundula Hintz, too, shone as the mother, Esther: clearly moved and capable
of moving.

Then, alas, comes the matter of the opera itself: so tedious that I
genuinely feared – hoped? – I might fall asleep. I suspect something could
have been made of some of the material (if not necessarily the musical
material), given a few years’ hard work, rethinking, and experience.
Director Jay Scheib wrote in the programme of the libretto, by Samantha
Newton and Rachel C. Zisser, having been ‘written in the form of a
screenplay. Transitions took the form of jump cuts,’ and so on. Would that
it had come across with any such focus or direction. It jumps around with
much confusion: not dramatic confusion, more ‘let’s say a bit about the
Holocaust here … let’s stop for a while and have a “meaningful” pause,’
etc., etc.

The lack of focus in the libretto is redolent more of an initial pub sketch
of ideas for an opera than anything more thought out. It is not
fragmentary; it is certainly not challenging; it is barely a drama. Sub-
(very sub-)Katie Mitchell filming – sometimes with an awkward time-lag –
did little to help, and perhaps a little to hinder. In Scheib’s words,
‘Cameras have afforded us access to a dynamic vocabulary normally reserved
for the visual world of the cinema.’ Quite apart from the ignorance and
arrogance of the claim – have you seen any German theatre recently, even
ventured so far as the Royal Court? – little is revealed other than
occasional, clichÈd flashes of blinding light: appearing, aptly enough,
long after lightning is supposed to have struck. 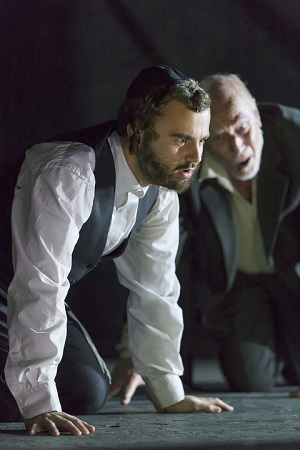 
Much, though not all, of the music stands on the verge of embarrassing:
swathes of vague electronic noise, sound effects, interspersed with
cantorial and other trivial melodies, the marriage of word and text in the
latter quickly heading for the divorce courts. (As for the former, it is
good, perhaps, to learn that the Church of England holds no monopoly on
banal liturgical music.) Attempts to define what is and is not opera are
most likely bound to fail. That said, surely the idea that it should in
some way or other be more than a play with music, that its music itself
should be dramatic, seems a reasonable assumption. There are, at the close,
a few signs of such a dawning realisation on Na’ama Zisser’s part. Some
simple musical figures start to add up to something a little more than
themselves, musically and dramatically. For me, however, it was all too
late. As I said, a period of revision would have been in order; such
progress might then have been read back into what had gone before, far too
much of which came across as something akin to a school project: fine for
those involved and their proud parents, but for the wider world? Would you
want your sixteen-year-old essays on the meaning of life, the universe, and
everything published and distributed?

‘Eine Oper ist ein absurdes Ding,’ Strauss’s Capriccio Count tells
his sister. In many ways, yes, although not always. It nevertheless takes a
great deal of effort and experience to be properly absurd. The
artifice in both Capriccio and Ariadne auf Naxos tell a
story, moreover, quite different from that which a superficial reading of
their synopses might suggest. Mozart was different, Apollo et Hyacinthus a superior work to half of those in the
benighted working ‘repertoire’ of many opera houses. Perhaps if one is not
Mozart, one might wait at least a little longer before testing the operatic
waters. It has worked – magnificently – for George Benjamin. And yes, this
doubtless rests on a view of works, masterpieces, the rest, considered
hopelessly outmoded by some. I am not, however, even claiming that a work
should necessarily be forever. (Let us leave posterity for another time, as
it were.) However, if a work is not for now, or at least not yet ready,
then someone ought to have asked questions more searching than the
self-congratulatory discussion published in the programme.