Whether the assembled patrons were loyal POP-eragoers, or eager Italian comic opera enthusiasts, it was demonstrably clear they were already expecting a good time. Happily, La Gazetta did not disappoint.
The plot is fast, loose, and occasionally illogical. A wealthy Neapolitan merchant arrives at the Aquila Hotel in Paris with his marriageable daughter in tow. Don Pomponio has anonymously placed an ad in newspapers far and wide that he will entertain “applications” to wed his attractive offspring, Lisetta. Unbeknownst to the Don, the girl is already (somehow) secretly in love with the owner of the Aquila, Filippo.
In parallel stories, a well-to-do playboy (Alberto) is ready to marry somebody/anybody who will have him. After Lisetta rejects him by falsely claiming she is already wed, Alberto instantly pursues Doralice, improbably and instantly winning her hand, since she has arrived looking for a husband.
With more comic twists and contortions than a Feydeau farce, Doralice is manipulated by her hectoring, aging dad, Anselmo. Tossed into the mix for no real reason are two extraneous personages: the meddling Madama la Rose (a blasÈ woman of luxury) and her inexplicably fey traveling companion Monsu Traversen. Got all this so far?
Well, you can now forget about it pretty much completely since the characters’ motivations, intentions, and emotional trajectories seem to turn on a dime (or a Euro). Giuseppe Palomba’s libretto (adapted from Goldoni’s Il matrimonio per concorso) serves only to approximate relationships and calculate conflicts that can then explode in an outpouring of delectable solos and ensembles. All the beloved trademark Rossinian musical effects are on ample display: dizzying coloratura, stratospheric melodic flights, tongue-twisting patter, intricately interwoven ensembles, heady crescendi, and ample variety.
Rossini notoriously “borrowed” from his own other works throughout his storied career, thus La Gazzetta has the same overture as La Cenerentola, part of an Act One Finale from Il barbiere di Sivigilia, a scrap or two from L’Italiana in Algieri, and unless my ears deceived me, some limpid phrases from Semiramide. If nothing in La Gazzetta is as effective as the set pieces in the master’s more familiarly celebrated works, there is still plenty to tickle the ear and even tug at the heart. 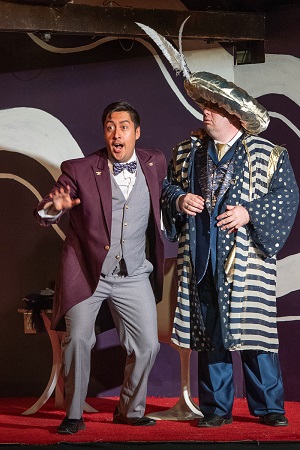 Armando Contreras (Phillipo) and E. Scott Levin (Don Pompoonio). Photo credit: Martha Benedict.
Don Pomponio’s entrance aria was one notably well-crafted solo piece, and E. Scott Levin made the most of the vocal opportunity. Mr. Levin has a sturdy, malleable bass-baritone, and he wields it with precision and authority. He has just the right look for this rich buffo role, although the requisite blustery musical temperament took a bit of time to catch up. After a somewhat “controlled” beginning, he capably eased into more abandoned comic effects, both visual and vocal.
Another memorable moment was Alberto’s plangent Act Two aria, which was suavely, tenderly delivered by tenor Kyle Patterson. Mr. Patterson’s earnest, boyish presence also characterized his exceedingly pleasant singing, complete with accurate, rapid-fire coloratura, which whizzed about effortlessly throughout the range. If Kyle slightly veils his very top notes, they were nevertheless delivered with enough panache to elicit one of the evening’s most enthusiastic ovations.
Messrs. Levin and Patterson also contributed notably to a flashy, rhythmically complex, stuttering trio, ably joined by Armando Contreras (Phillipo). Mr. Contreras is possessed of a strapping baritone, which he deploys with unerring musicianship and fine dramatic understanding. Armando’s complete command of copious, Dandini-esque melismatic passages was commendable for its fiery accuracy and conviction. This same trio also ignited a goofy charisma between the three performers who brought the house down with uninhibited hip bumps, daftly synchronized semaphoric gestures, and flat out unrestrained good singing. 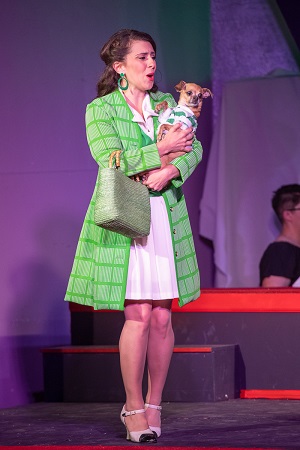 Rachel Policar (Lisetta). Photo credit: Martha Benedict.
On the distaff side, Rachel Policar scored a considerable success as the complicated, conflicted daughter-for-sale, Lisetta. Ms. Policar cuts a petite, slender figure on the stage, and her silvery soprano is in the very light lyric Fach. But don’t underestimate her power to communicate spitfire moments, as she zings out roulades and acuti with effortless aplomb. In her main aria, she manages not only a bravura display of florid singing, but does it all while being toted and hoisted around by four chorus boys, at one point being held aloft in a full-flying split. Do not try this at home!
Molly Clementz displayed a plummy mezzo as the man-hunting Doralice. Ms. Clementz has a wonderfully rich tone, gleaming top notes, and a vibrant lower register. While she is not yet quite wholly immersed in the specific Rossinian tradition of presentation, hers is still already an enjoyable role traversal. As Doralice’s manipulative father Anselmo, veteran Phil Meyer’s commanding bass rolled forth with domineering, characterful results.
Mezzo-soprano Jessie Shulman and baritone Scott Ziemann perhaps did all they could in the (for me) extraneous throwaway roles of Madama La Rose and Monsu Traversen, respectively. In these under-written parts, Ms. Shulman nevertheless had effective moments above the staff when she mustered some real oomph to propel her distinctive, diffuse vocal quality. For all Mr. Ziemann’s animated mincing and limp-wristed tic’s, his singing did not match his physical commitment. What I heard was attractive, but I did not always hear him.
The industrious chorus of eight was called upon to do the work of eighty, and man, did they deliver the goods! Whether singing with full-throated abandon, or executing Amy Lawrence’s relentless choreography, or quick-changing costumes numerous times, this energetic group never flagged in their coordinated concentration. 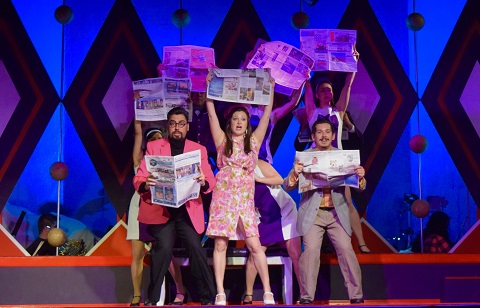 Photo credit: Scott Ziemann (Monsu Traversen), Jessie Shulman (Madama La Rose), and Kyle Patterson (Alberto). Photo credit: Martha Benedict.
Director Josh Shaw has invested the proceedings with enough good comic ideas for at least three productions. Designer Josh Shaw has set the show in 1960’s Paris, with eye-popping set elements and brilliant uses of color which add to the manic feel. The hotel lobby is on the main stage with an up center platform backed by four large cutout diamonds, with the check-in desk looming down stage left. The action spills over to house right, onto a platform dressed as the hotel bar.
As visually appealing as is the total look, it felt more like Retro Vegas than 60’s Paris Chic. That said, Maggie Green’s witty profusion of costumes added immeasurably to ground the concept. By the ending tableau with everyone cavorting in glitzy, sparkling, faux Turkish floor show attire, okay, okay, I might just stretch to imagine we could indeed be reveling in the Lido or Moulin Rouge “in the day.”
One promising design element was the well-intended lighting. The prolific and effective use of color did not quite compensate for the recurring dark spots, or infrequent delayed cues. In the bar, there were five stools used for the beautifully performed, rediscovered quintet, but one of the characters was in the dark for the whole segment. Perhaps an instrument was out? This should be an easy adjustment to make for future performances.
Mr. Shaw has fashioned a take-no-prisoners approach to the staging, which was rife with clever touches. The use of revolving chairs was a recurring theme, likewise a kick line or ten. Unison gestures were repeated, inverted, subtracted, added and inverted again. While all of this was meticulously executed, I felt there could have been moments of stillness that would have added variety. During a particularly unrelenting frenzied passage I found myself wanting to say: “Don’t just do something, stand there!” I got my wish in Act II when the material lent itself to a more measured presentation.
Brooke deRosa conducted with stylistic acumen, in a reduced orchestration of her own creation. In spite of the sprawling playing space and the supreme challenge of the musical complexities, Maestra deRosa commanded her forces with admirable precision. While the ten instrumentalists displayed good individual talent and a conscientious approach, at the premiere they experienced a few scrappy ensemble moments. Too, they sometimes ran out of aural steam in musical playoffs. Perhaps reordering their placement behind the set, putting the strings forward and the winds in the rear would even out the sound a bit more.
To the cheering, capacity audience, none of this nitpicking mattered, of course. The crowd was fully engaged from first to last. In addition to the charming performance, the opera-going experience included table seating, a charcuterie platter, and a bottle of wine. Pacific Opera Project has evidently hit on a winning formula for a night out, serving up food, drink and an operatic discovery in equal measure.
POP will be broadcasting the final performance (Saturday, July 7 at 8:00 pm PDT) on Facebook Live.
James Sohre
Rossini: La Gazzetta
Don Pomponio: E. Scott Levin; Lisetta: Rachel Policar; Phillipo: Armando Contreras; Alberto: Kyle Patterson; Doralice: Molly Clementz; Madama La Rose: Jessie Shulman; Monsu Traversen: Scott Ziemann; Anselmo: Phil Meyer; Conductor: Brooke deRosa; Director and Designer: Josh Shaw; Choreographer: Amy Lawrence; Costume Designer: Maggie Green; Continuo: Zach Neufeld