In music, quality comes before quantity, so many performances scale down the numbers for the sake of the music. But the Royal Albert Hall was created for extravagant choral spectaculars In this vast barn of a building, it’s possible to do things with Mahler’s 8th that couldn’t be done elsewhere. Most of the 6000-strong audience will remember this Prom for years to come. For starters, the Royal Albert Hall is in itself a form of theatre: the dome, the atmosphere, the sense of communal anticipation and the sheer visual impact of seeing the choristers file into their places. All eight rows of the choir stalls were packed, with another row of singers above that still. Across the entire breadth of the hall, two rows of young singers dressed in white. And right at the heart, the Royal Albert Hall organ so majestic that it sustain the whole powerful experience.
With its unconventional structure and eclectic meaning, Mahler’s 8th still remains perplexing for many. Why are the two parts so different ? How do they work? Nearly every good performsnce can offer insight. Under S¯ndergÂrd, the BBC NOW is at a peak but the glory of this performance was built on the choral forces he had to hand – the BBC National Chorus of Wales (Adrian Partington, chorus master), the BBC Symphony Chorus (Neil Ferris) and the London Symphony Chorus (Simon Halsey) with the Southend Boys’ Choir and Southend Girls’ Choir (Roger Humphreys). Halsey was chorus master of the City of Birmingham Symphony Orchestra and of the Berlin Philharmonic before his present post, and Partington, one of the stalwarts of the Three Choirs Festival (which starts next weekend) has conducted Mahler 8 before, at Gloucester Cathedral. Thus the exceptional coherence in the singing : hundreds of individuals operating in unison, negotiating the swift changes with precision, keeping lines fluid and clean. In a symphony that predicates on images of illumination, this clarity is important. Most impressive of all was the stillness these massed voices managed to achieve in the quieter passages. Though the nickname “Symphony of a Thousand” predisposes listeners to expect overwhelming volume, the critical passages are marked by hushed refinement, the “poetical thoughts” of spiritual refinement. Hearing hundreds of voices singing quietly, tenderly and yet in unison was very moving. They even seemed to synchronize turning their pages. 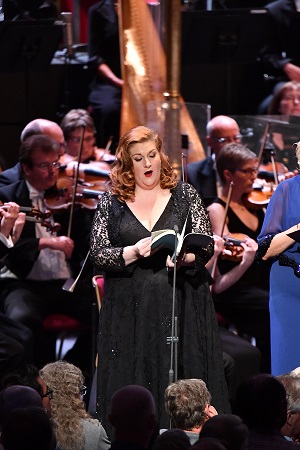 Tamara Wilson. Photo Credit: BBC/Chris Christodoulou.
The First Part of this symphony is based on an ancient latin hymn about the Pentecost. Divine fire descends upon the Apostles, inspiring them to go forth on their mission to spread Enlightenment. Hence the direct attack with which “Veni creator spiritus!” was executed , creating an aural force field n which the soloists voices were embedded. Though the soloists – Tamara Wilson, Camilla Nylund, Marianne Beate Kielland, Claudia Huckle, JoÈlle Harvey, Simon O’Neill, Quinn Kelsey and Morris Robinson – stand at the front of the platform where they can be heard, they are primus inter pares – first among equals – operating as an extension of the chorus and orchestra.
In the Second Part of this Symphony, Mahler was inspired by Goethe’s Faust, where Faust is redeemed by divine grace. The soloists are named but they operate as stages in the transformation,: they aren’t acting out roles as if in an opera. Take the names too literally and miss the esoteric spirituality, where ego is sublimated for a higher purpose. The variety in the voice types reflects human diversity,. I liked the balance between O’Neill’s earnest fervour and Kelsey’s rich tone, anchored by Robinson’s bass. These parts also operate in musical terms suggesting movement upwards and downwards, on simultaneous planes, also pertinent to meaning. The women’s voices supply the Das Ewig-wiebliche, the “Eternal Feminine”. This dichotomy between male and female, creator and muse, is central to Mahler’s later work. The chorus of Blessed boys operates in parellel. “Wir werden fr¸h entfernt von Lebenchˆren”, They too, have been reborn by an act of faith, but how cheeky and childlike they are, like th child in Mahler Symphony no 4. 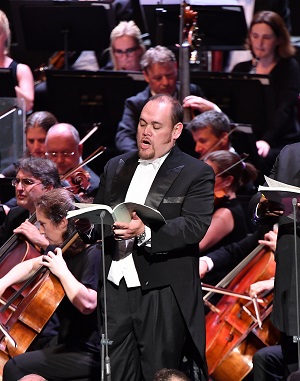 Quinn Kelsey. Photo Credit: BBC/Chris Christodoulou.
The vocal music in Mahler’s 8th inevitably draws attention, and deservedly so. Thus the absolute importance of the silence that follows the ecstasy with which the first part ends. It represents a transition, bridging the two disparate parts, cleansing away what has gone before, settingb the scene for what is to come. But in many ways, the whole Symphony pivots on the first part of the Second Part where the orchestra alone speaks. S¯ndergÂrd approached it with restraint, letting the detail shine. Pizzicato figures suggest tentative footseps entering the new territory evoked by sweeping strings, called forward by horn and flutes. The Chorus and echo repeat the pattern, marking the transition. Throughout the symphony, details were respected, so individual instruments like flutes, celesta and harps could be heard despite the size of the forces around them. Some conductors achieve much more luminous purity, but S¯ndergÂrd made the most of generous choral resources at his disposal, which played to the strengths of the Royal Albert Hall.
Anne Ozorio