Holten’s Don Giovanni is entirely about making the most of Es
Devlin’s sets – and he does so even before the Overture, as lugubrious as
any I’ve heard, has even ended. Devlin’s sets are undeniably imposing – a
vast colonnaded front, with balconies and endless doors, balustrades and
hallways linked by stairways that disappear into infinity. At times I had
difficulty deciding whether I was looking in on a Romanesque temple or the
set of Hush… Hush Sweet Charlotte and the Hollis Mansion in its
antebellum, southern Louisiana horror. But just as Altman’s 1964 film had
been a study in psychological breakdown, of seeing ghosts at the top of
staircases, Holten extends his cinematic journey into his Don Giovanni still further by drawing us into Hitchcock’s 1945
study into psychoanalysis and surrealism, Spellbound, with his own
Dali-inspired Don Giovanni aria ‘Fin ch’han dal vino’ with the Don
as the centre of the eye amid a converging point of infinite distances.

If Holten’s production shares one thing with Bieito’s it is that both are
somewhat voyeuristic in their views of the opera, very much comfortable
with the objectification of sexuality. From the outset, Luke Halls’s video
design (this is very much a production for the digital age) gives us a
running count of the Don’s sexual conquests – and there are so many of
them, they cover not only every inch of the outside of the walls, but the
inside too… from the sides of staircases, the steps themselves, furniture,
even objects on tables. Echoing Escher’s stairs, the geometric set reflects
a sense of perspective and depth to this endless pornography. This graffiti
leaves an almost permanent stain throughout the entire opera, a reminder
that Don Giovanni’s existential sexuality is based entirely on deceit and
immorality embedded as it is deep within his psyche. It’s no coincidence
that his principle lovers are also damaged goods – the cluster of ink blots
on their dresses, Rorschach-like, but also reminders of sex itself. When
the litany of names are erased it’s to soak the walls in crimson blood, or
drench them in the bleakness of Don Giovanni’s mental psychosis. 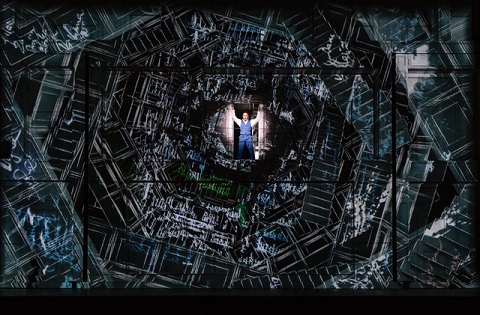 Musically, this Don Giovanni is a bit of a mess. Textually, it is
neither the complete Vienna nor the Prague edition, nor the usual mixture
of both – and many will find excising ‘ Questo Ë il fin di chi fa mal’ from the end troubling, though I
think it better meets Holten’s objectives for this production to exclude
it. Holten’s Don is so psychologically flawed, so concerned with projecting
his pain onto others and using his sexual narcissism to seduce almost
everyone he encounters into complicity, that his descent into madness at
the end seems a more fitting conclusion. Holten’s Don is morally corrupt,
but as Kierkegaard also suggests desire is “victorious, triumphant,
irresistible and demonic”. The comparison with Faust is completely
unambiguous and, rather as the French novelist Jean Genet was fond of
suggesting when describing his own views on sex, this is a Don who is in it
for the chase alone.

The casting of Covent Garden’s revival is fairly strong, and, frankly, it
needs to be to fight against Marc Minkowski’s interminable and heavy-handed
approach he takes with much of the score; I thought Act I was never going
to end. This approach to the music doesn’t sit comfortably with the
dramatic visual changes that Luke Halls’s video design and Bruno Poet’s
lighting is presenting on stage – often what the eye is seeing isn’t
corresponding very closely to what the ears are hearing. Minkowski didn’t
always generate much enthusiasm from the orchestra either, so it was
perhaps all the more surprising that the singing itself was often of a very
high standard indeed. 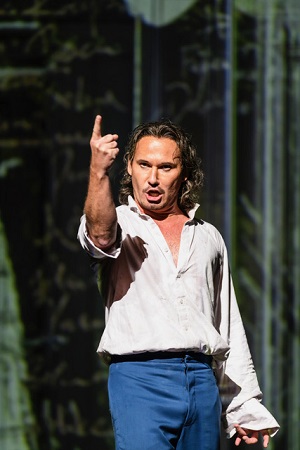 The Polish baritone Mariusz Kwiecie? is the kind of Don Giovanni that seems
ideally suited to Kasper Holten’s production. In many ways, I found his
assumption of the part quite disturbing – he’s dynamically sexual, a
prowler, but the trajectory towards his mania is like watching a breakdown
happening in slow motion so deeply does he explore the depths of the
character’s underlying psychology. The voice is superb as well, a dark,
true baritone – like Eberhard Waechter’s – able to explore the demonic and
seductive sides of the Don’s personality. He was nowhere better than in his
final confrontation with the Commendatore, imperious of tone, the technique
immaculate, with just enough spine-chilling darkness to the voice. Perhaps
he was fortunate that his Leporello was Ildebrando D’Arcangelo. Kwiecie?
and D’Arcangelo often subverted the master/servant equation, so much so
that Joseph Losey’s The Servant seemed like a model for their
unbalanced relationship, even with its latent hints of an uneasy masculine
derived sexuality. Although he sometimes looked as if he had fallen out of
a Chicago Sleep Easy, D’Arcangelo moved with breath-taking ease between
being a figure capable of easy-going humour one moment, and disturbing
violence the next. More so than in many productions, Holten views his
Leporello as a tragic shadow of Don Giovanni himself – even the
similarities in the voices that both these singers share suggested a much
closer alignment to their fates than normal.

Rachel Willis-S¯rensen, as Donna Anna, never sounds vocally stretched (as
can sometimes happen with this role) and is as lyrical as she luminous.
Hrachuhi Bassenz, as Donna Elvira, is done with considerable intensity at
times, almost as if she is on the edge of hysteria. As with many of
Holten’s characterisations in this production, there is a sense that his
women, especially, are being driven into a kind OCD pattern of sexual
behaviour – coming back for more of the same, even though it is pushing
them into damaging psychological breakdowns. Both Donna Anna and Donna
Elvira are more complex women than we usually see in this opera, even if
what we see is quite disturbing.

As for the rest of the cast, Willard W. White, as the Commendatore, perhaps
lacks the depth of tone he once had to command the stage but was
compelling, especially in his showdown with Kwiecie? – even if he looked as
if he had risen from George A. Romero’s Dawn of the Dead, taking
to stalking Don Giovanni around the corridors like a zombie. Pavol Breslik
was a beautifully lyrical Don Ottavio, and convincingly handsome, Chen
Reiss a somewhat matronly Zerlina, and Anatoli Sivko a sonorous, if
ultimately unsympathetic Masetto.

Holten’s Don Giovanni probes deep, and Es Devlin’s sets, dizzying
though they are – quite literally – are visually spectacular. The entire
opera is a tour de force for its lighting engineers and someone
working on a laptop, but the length of time we are asked to engage in
looking at the staging borders on the cinematographic rather than operatic.
Likewise, the demands that Holten places on his audience and the questions
he asks squarely place Mozart the composer second. On opening night, the
cast sang well despite the conductor, not because of him – in other
circumstances this production might well be not so fortunate.