What might have been, had this magnificent statement of intent – one of the
greatest opera directors alive – from Sebastian F. Schwarz’s intendancy not
been followed by manúuvring to ensure that something more ‘English’ would
thereafter prove the order of the day? What might have been, had this PellÈas been conducted by someone with a little more feeling for
and understanding of Debussy’s score – it would not have been difficult –
than Robin Ticciati? What, ultimately, might have been, were operatic
culture in this country not so philistine and class-ridden? The good news –
our lives are at present as full of good news as those we see in PellÈas – is that leaving the European Union will only serve to
make everything far, far worse. C’est au tour de pauvres petites.

I was thinking, though – which is considerably better than not. Even if I
could not help but wonder what PellÈas set on a spaceship would
have been like – on the face of it, it sounds a brilliant idea –
Glyndebourne’s Organ Room, from time to time a salle modulable yet
never escapable, turned the action and responsibility squarely upon us, the
audience. (If only the worst-behaved had noticed. Some laughed at the end.
Laughed! It was not difficult to think of them as Faragistes.) It is
specific, yes, but not exclusivist. Indeed, with its heavy wood-panelling
in Philipp F¸rhofer’s outstanding set design, it might almost be the
Victorianised combination room of an Oxford or Cambridge college or even
something from the Hamburg of Buddenbrooks. Ancestry and tradition
weigh down on it, though, as seen on the severe wall portraits. It is about
us, then, but also about how we have become who we are.

‘Us’ in this sense means taking on aestheticism, asking ourselves as well
as selfish fellow audience members what we think we are doing and why.
These are people engaged in fruitless, fatal pursuits – but in this case
they are also aesthetic pursuits. They try to paint new pictures and
cannot. Why not? On account of tradition, or account of an aestheticism
that has them retreat from lives, even try to turn their lives into art? It
need not be either/or; it almost certainly is not. We see through their
attempts at art, though: literally, for the paintings, if they exist at
all, are beyond the fourth wall. Is not MÈlisande, after all, a blank
canvas? Men certainly tend to wish her so – as with Lulu. It is just a
hobby, though, is it not? Something for rich people to do to while away
their time, perhaps like building an opera house so that ‘your’ – the
possessive is important – wife might sing in it. PellÈas might seem
different; he is, here, an artist, a younger Debussyan dandy rather than
the elderly huntsman trying to be something he is not and certainly was
not. (Are Golaud and PellÈas to be identified with the composer? Perhaps,
perhaps not. If you do not want ambiguity, this is not the opera for you.)
But is he? Is he really? Or does he just wear summer clothes in a darkened
room? Perhaps his aestheticised life is still more dishonest; perhaps ours
are too. Perhaps, peut-Ítre. ‘Je pars peut-Ítre demain.’ 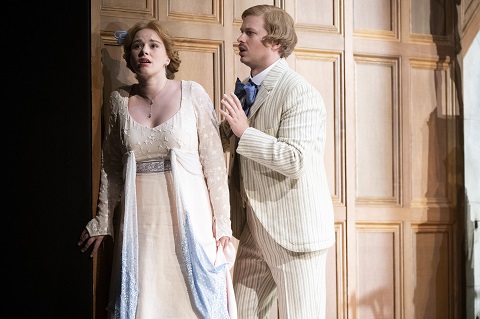 We do that to children too, especially those of us who claim to be shocked
by the very suggestion. Germaine Greer has fallen off the rails
spectacularly in recent years, but her insight that we are all paedophiles
still holds; indeed it holds more strongly than ever, if less so for those
of us unburdened by ‘family’. And so, when Yniold – yes, I too had been
mumbling that I should have preferred to hear a treble – is unmasked as a
woman all along, with locks aspiring to those of MÈlisande, we are obliged
to ask ourselves questions. The violence we see, feel aestheticised and
sublimated all around us suddenly becomes, as the interval comes, something
we can no longer ignore. Those blows that never quite led anywhere come to
seem something more than ‘boring’.

By the same token, however, should they perhaps not have become something a
little sooner? When does representing boredom become merely boring? I am
not sure that Herheim, usually a master at treading of multiple lines, does
not trip, even fall, in this case. An object lesson in that respect was

for the Bavarian State Opera. Meaninglessness was the thing there, not ennui as such; the production was all the better for it. I cannot
help but wonder whether the negative reaction it received was laced with
misogyny – and/or perhaps a journalistic lack of understanding of ‘modern’
theatre. It was, at any rate, difficult not to ask such a question in a
work that focuses on abusive behaviour and yet here, at least, attempts to
avoid addressing that behaviour. 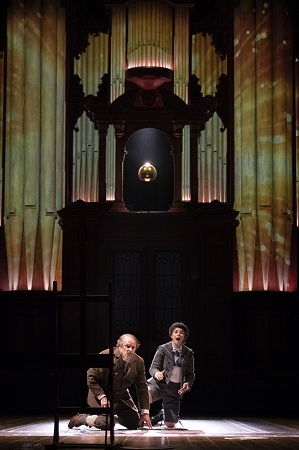 Later on, when it becomes more explicit, when we see that PellÈas and
MÈlisande literally stage their own death – is it actually a real death at
all, or just an act – everything falls into place. MÈlisande has already –
in fact she did so straight away – ease(le)d out GeneviËve. The family,
closing ranks, would clearly avenge itself, so perhaps playing at Tristan
and Isolde is all that it is left. It has not been an easy road; nor,
surely, should it have been. However, just a little relief from the
claustrophobia might actually render it more powerful. As things stand,
there remains more than a little suspicion that earlier tedium is a handy,
even suggestive excuse, yet perhaps nevertheless an excuse in part.
Bloodied clowns certainly make their point; this sick Liebestod
from the Theatre of the Absurd has still not left my imagination. Yniold,
now herself, visits the Organ Room as a guest, an opera-goer. It
makes the point, yes, but might it not be better left unmade?

Tradition is, after all, sometimes necessary, or at least helpful – as the
Roman Catholic Church would rightly tell us. It often provides an important
counterweight to literalism, to fundamentalism. Collective wisdom enables
development; each one of us need not re-invent the wheel. (Aesthetes
breathe a collective sigh of relief.) As Pierre Boulez pointed out in
challenging – though not, as some have claimed, denying – tradition, ‘a
strong personality will inevitably transform it [tradition].’ That still
leaves the problem, of course, of what to do about personalities that are
not ‘strong’ or do not wish to be. ‘Ne me touchez-pas! Ne me-touchez-pas!’
Is the conclusion here bleak or weak? Is it too easy to say that it is what
we want it to be? Doubtless. Is it what we will make of it? By definition
it more or less has to be, but is that simply to evade the question? And is
that wrong? Debussy, after all, is the unsurpassed master of musical
ambiguity. 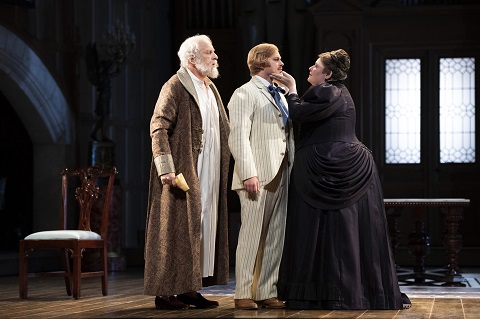 Tradition, or at least learning, would certainly have benefited the
conducting, at best featureless, at worst frankly jejune, we heard from
Ticciati. Debussy’s genius shone through, although more the debt to Wagner
than what distinguished him from the old Klingsor. That, however, was
surely the doing of the London Philharmonic, drawing when it could on its
vast reserves of operatic and symphonic experience. Alas, such uninspired
musical direction – bleeding titbits of Wagner for people who do not like
Wagner – did not help the singers either. Christopher Purves was presented
as an older Golaud and sang as such: nothing wrong with it. His anger was
wonderfully sublimated until it was not. It would have gained greater
musical context, though, as would the rest of the cast’s, had there been –
well, greater musico-dramatic context. Christiana Gansch and John Chest
likewise offered good vocal performances as the doomed lovers, but
something seemed to be missing. (Should something be missing? Perhaps.
Again, however, it is a fine line.) Richard Wiegold was an undoubted hero
of the evening, singing from a box whilst an indisposed Brindley Sherratt
acted out the role of Arkel below. Karen Cargill offered rich-toned
benevolence – I think – as GeneviËve; as so often in this role,
one wished there were more to hear. There was much to admire from ChloÈ
Briot, Michael Mofidian, and Michael Wallace, although it was difficult not
to think that all concerned would have benefited from greater certainty and
clarity elsewhere.

Was it worth it, then, to have annoyed the right people, bluff English
purveyors of ‘common sense’? Of course. They will not like PellÈas anyway; if they think they do, it is because they have not
remotely understood it and think of it as vaguely ‘beautiful’. Is it enough
to have annoyed them? Of course not. Does this represent Herheim’s best
work? No. Does the production stand in need of revision? Very much so. Does
it also need a conductor with a little more idea what might be going on and
what might be at stake? Still more so. And yet, I have been thinking about
it ever since, and show no sign of stopping. In the meantime, hasten to see

and, should it ever be revived,

. There are always, as we Êsthetes/Êstheticists will tell you, great
recordings too. DesormiËre or Karajan? Boulez or Abbado? Why choose? With
Boulez, you can even see Peter Stein before he lost it. ‘What,’ you might
ask, ‘is “it”,’? Such is surely part of what Herheim’s production is about
– perhaps, peut-Ítre, still more so than he intended.