That the semi-staging probably rescued the evening from large-scale failure
– as many semi-staging’s do – had much to do with focussing the drama of
this opera rather tightly. It was largely beautifully acted, with some of
the symbolism and mystery of the text much less micro-managed than in a
full-scale production of the opera.

I think SinÈad O’Neil’s staging is mostly admirable. It would have been
easy to have done very little, but she does quite the reverse. Some scenes
are certainly more compelling than others – Golaud’s hair-pulling scene,
with MÈlisande writhing as if bound to a stake, is rather monstrously done.
Golaud, from one of the choir stalls, acts just like a malevolent
puppet-master. The end of Act III, where Golaud persuades Yniold to spy
into the windows of the tower, was genuinely rather terrifying – indeed,
it’s reasonably rare to find any production where the tension between these
two characters seems to fit with the music Debussy wrote but it does here.
PellÈas and Golaud wandering through the castle dungeons only worked
through careful lighting but it was magnificently sepulchral nevertheless.
On the downside, interior scenes looked and felt cluttered and had the
unintended effect of making one feel everyone had fallen on very hard
times; it often felt like downstairs at Downton Abbey. Importing the
original productions hefty over-reliance on hand gestures, especially the
perpetual covering of eyes, became slightly grating; one often felt one was
trying to read sign language. Often there’s so much going on it’s against
the very synthesis of the music itself. Much of this opera, for better or
worse, is about stillness and that’s a concept that the staging really
didn’t appreciate. 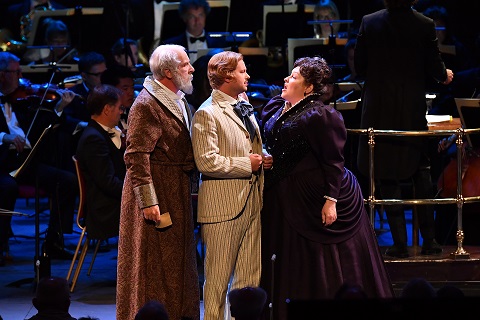 I did find the casting a problem. Debussy attached great significance to
the libretto of this opera – indeed, the rhythms of the words are quite
meticulously designed to be heard in this opera – so it was
disappointing that so much of the sung French was so opaque. It had little
to do with the fact that the hall sometimes swallowed voices, or they
simply disappeared, rather that it wasn’t a particularly refined cast. In
one sense this is a rather misty, or ethereal opera, and the lack of detail
in the voices rather added to this. Karen Cargill’s GeneviËve, for example,
was luxury casting – but she was so velvety, so vocally secure that she
rather forgot to bring any sense of mystery or depth to her character.
Christopher Purves, as Golaud, seemed a tad one dimensional to me. This is
perhaps the most vividly drawn character in the entire opera, but that was
entirely irrelevant here. What we got was someone who acted beautifully but
sang as if Golaud was entirely driven by anger and violence; the fact
Purves felt the need to dominate the orchestra again suggested a lack of
depth – this is a man possessed by raging jealousy, too, and innately
virile; it didn’t come across that way. John Chest’s PellÈas began a little
nervously – some of his A flats were flaky – but of all the male leads he
was the most successful at pitching the balance between rhythm and concept
– and his singing became notably more passionate during the evening. If the
voice had been a little frayed earlier on, it was notably more secure by
the time of his death. Christina Gansch’s MÈlisande was girlish enough, but
the blandness of the voice, and the lack of nuance, left me wondering why
this particular Golaud and PellÈas would be involved with her at all. Only
ChloÈ Briot’s Yniold – the sole native French speaker among this cast – was
really a success at getting to grips with the text, and also doing
something meaty with her role. 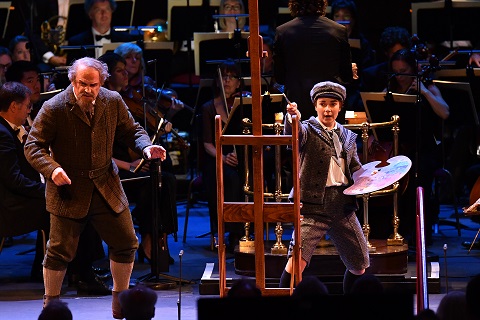 The undisputed highlight of the evening was the playing of the London
Philharmonic Orchestra. I’ve rarely – if ever – heard this score better
played. The LPO is becoming one of the great opera orchestras: time and
time again, I found the detail a revelation, the internal instrumental
voices, the clarity of phrasing and the impeccable balance of tone and
colour remarkable. The woodwind, especially, have such flexibility they can
almost do anything asked of them. I think one can certainly quibble with
Robin Ticciati’s approach to the opera itself – and this was certainly
reflected in the LPO’s overall sound. At times I did feel as if I was
listening to Parsifal rather than PellÈas et MÈlisande –
the Wagnerian inferences are certainly in Debussy’s score but sometimes you
wondered if Ticciati thought it was Klingsor wielding the sword rather than
Golaud. The strings, too, sounded heavy at times – but what a wonderful,
spellbinding richness of sound it was. Ticciati took a somewhat majestic
view of the score, too, less overtly sensuous than some, certainly less
French, but he can whip up tension and terror when it’s needed but there
are also beautifully seductive, dark-hued moments too. It certainly won’t
appeal to everyone, and sometimes borders on being self-indulgent, but the
tightrope he walks is just narrowly a viable one.

The tightrope that Glyndebourne’s semi-staged production walked wasn’t
entirely a successful one, but very few productions of this magnificent
opera manage to make a complete success of it. Not the most satisfying PellÈas, but a ravishing orchestral feast I won’t soon forget.

Available on BBC iPlayer for 30 days.