This co-production between Investec Opera Holland Park and Scottish Opera
adds further bifocal perspectives. Antony McDonald’s production was
originally staged in spring, behind the scenes of the mansion belong to
‘the richest man in Glasgow’, and now the director and designer has brought
the show from north to south, morphing the Scottish pile into South
Kensington’s Holland Park House.

The rival operatic and vaudeville troupes are cooped up in tatty trailers
either side of the lawn, the burlesque comedians, circus artists and MC
taking the air on the top of their grass-bound motorhome, the diva and her
tenor lounging in a curtained caravan. 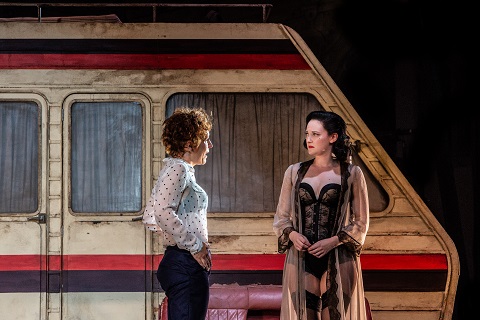 The Prologue antics are rather frantic as Stephen Gadd’s deliciously
poker-faced Music Teacher receives and rebuffs the news – delivered in
broad Glaswegian brogue by Eleanor Bron’s Party-Planner (aka the Major
Domo) – that his protÈgÈ’s classical-themed opera will need to be
synchronised with the burlesque troupe’s acrobatics if the money-man’s
pyrotechnic coda is to be lit by 9pm. The colloquial quips of Helen
Cooper’s English translation help Strauss’s conversational idiom to skip
along, but the acoustics of Opera Holland Park’s dome defeated Bron, and
sadly I for one struggled to make sense of her spoken text (for which there
were no surtitles – a pity, in an unforgiving venue).

Seria
and buffa elements were confrontational rather than cohesive –
perhaps that’s how it should be – but Julia SporsÈn’s Composer brought
disparate parts into a cohesive whole, with her Schubertian-Straussian
paean an die Musik. SporsÈn’s soprano shone and thrilled and both
her declaration that music is a holy art and her interactions with
Zerbinetta were genuinely touching. Jennifer France’s Dietrich-like,
dynamic Zerbinetta may have thought she was engaging in mild flirtation,
but her heart was clearly hooked by the Composer’s soulful sincerity and
artistic and romantic integrity. And, here McDonald has added another
piquant twist, making the Composer a woman – given that SporsÈn sported a
blue suit and the only hint of femininity was dark underwear showing
through her white polka-dot blouse, some in the audience may have been
confused -thereby adding a touch of spice to the androgynous aromas of
Strauss’s original travesti interactions.

The gender-switch also means that it is a woman who has penned the tale of
Ariadne’s love, loyalty and loss, subtly shifting the sympathies of the
perspective. When Mardi Byers appears at the start of Act 2 and lingers
beside a grand dining-table, abandoned mid-meal – taking a glug of red wine
from a half-filled glass, gazing forlornly at an un-cut tiered cake – it’s
hard not to see a hint of Miss Haversham’s Satis House mausoleum, spacious
and handsome but in which ‘every discernible thing in it was covered with
dust and mould, and dropping to pieces’, the most prominent object being ‘a
long table with a tablecloth spread on it, as if a feast had been in
preparation when the house and the clocks all stopped together’. 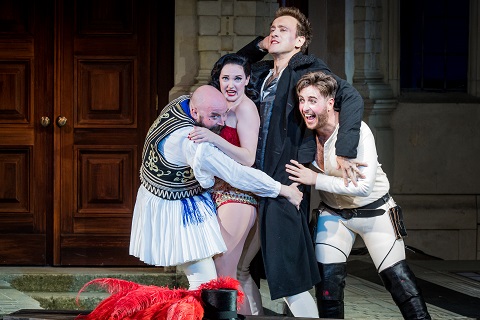 Dickens jilted bride ‘laid the whole place waste, as you have seen it, and
she has never since looked upon the light of day’, and so this Ariadne
stares yearning at the coffin which she longs to make her final resting
place, sooner rather than later. Only the dulcet urgings of the three
nymphs keep her from the abyss. Elizabeth Cragg (Naiad), Laura Zigmantaite
(Dryad) and Lucy Hall (Echo) resembled the Queen of the Night’s Three
Ladies in their gorgeous frocks, with bat-like trains, of white-grey-black:
veritable bridesmaids-in-decay.

McDonald doesn’t quite keep seria and buffa in balance,
and the vaudeville troupe threaten to up-stage the classical in Act 2,
especially when they take a rest from the show-casing their spectacular
circus skills – not one spinning china-plate fell – and they grab the
wedding-cake from the table and flick through a book of Greek myths. Circus
skills director Joe Dieffenbacher has mentored his tutees expertly and Alex
Otterburn (Harlequin), Daniel Norman (Scaramuccio), Lancelot Nomura
(Truffaldino) and Elgan Ll?r Thomas (Brighella) form a compelling vocal and
kinetic ensemble. And, to be honest, it’s a relief, after several recent
productions, to have a vaudeville troupe who are more Berlin satire than
barbershop saccharinity. 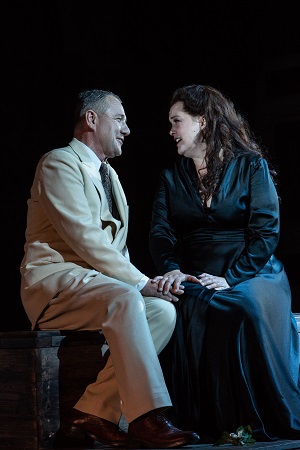 The arrival of Kor-Jan Dusseljee’s stentorian Bacchus – high notes
sometimes a little overly ear-piercing but still remarkably true and firm –
marked a shift in the dramatic dynamic from triviality to transcendence.
Byers didn’t negotiate every phrase with Straussian suavity, but there were
rich colours and honest emotions, and this Ariadne’s torment and troubles
were palpably evident. In their final duet, she and Dusseljee effected the
necessary translation and quickly the busy preliminaries to their romantic
apotheosis were forgotten as they drew us into their unearthly paradise. It
was at this moment too that conductor Brad Cohen, who had presided over an
impressive account of Strauss’s sumptuous music up to this point, seemed to
become totally absorbed, his arms swirling and sweeping all sumptuously
into Strauss’s musical magic. 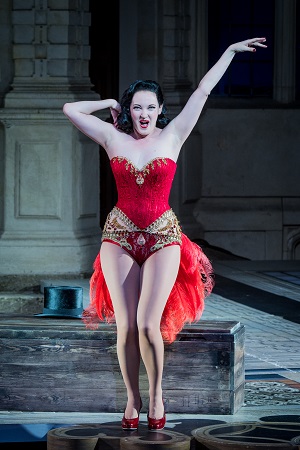 But the real transcendence was to be found elsewhere. When Strauss began
setting Hofmannsthal’s libretto he said that he envisaged Zerbinetta as the
leading role, and he told his librettist that he would be writing the part
for a high coloratura soprano – Ariadne was originally to be a contralto –
advising Hofmannsthal to listen to Selma Kurz, the first Zerbinetta,
singing arias from La sonnambula or Lucia di Lammermoor
if he wanted to get a feel for the idiom. And, so it was that Jennifer
France was the true Sirius in a stellar show, delivering her vocal
acrobatics with astonishing athleticism, precision and expressive nuance,
all the while performing a teasing strip-show. Languor and assertiveness
were wonderfully melded in sensual sublimity. It was hard to tell who
enjoyed it most: France or the mesmerised audience.

And, it was France who held our attention in the closing moments. With
Ariadne and Bacchus united in divine devotion, one by one the other
characters crept in to witness the denouement and take their bows.
SporsÈn’s Composer was the last, and her arrival drew Zerbinetta from her
embrace with Harlequin: it was the women’s love that had the last word. A
love celebrated by a fountain of fireworks – an hour late, at 10pm, but
still a fitting accolade for Investec Holland Park’s vocally stunning
Strauss debut.