The vitriolic Berlioz, still smarting from the failure of his own Benvenuto Cellini after just ten performances at the OpÈra, may
have dismissed Donizetti’s La Fille du RÈgiment as
trivia, but the rest of Paris was smitten when the opera premiered at the
OpÈra-Comique on 11th February 1804. Even the previous
dismissive Mendelssohn had to admit Donizetti’s talent: ‘I am afraid I like
it … Do you know, I should like to have written it myself.’

Opera della Luna’s Artistic Director certainly takes the Donizetti’s
‘little opera’ seriously: his production, first seen in 2014 and now
slightly revised, treats the opera with a light and loving touch as it
transfers the action from the nineteenth-century Swiss Tyrol to the desert
mountain ranges of California during the 1950s.

The abandoned baby, Marie, is not found by a corps of military muscle but
by a gang of leather-clad bikers, The Regiment, who are engaged in
non-mortal combat with their rivals, The Wild Cards. Think
Donizetti meets West Side Story. Ian Wilson’s lighting fetchingly
contrasts the heat-laden cobalt blue sky with the ochres of the sun-cracked
scorched earth from which a few prickly catci sprout. When we transfer, in
Act 2, to the Berkenfield Mansion, where Marsha plots with Dulcie
Crackenthorpe to marry off her reclaimed ‘niece’ to Dulcie’s son, the
desert makes a surprisingly effective home for the grand piano.

The cast’s American accents – in both the spoken text of Clarke’s
colloquially spicy translation and in the musical numbers – are convincing
and consistent, and none more so than the warm drawl of Charles Johnston as
Sulpice, the President of The Regiment. Despite the aggressive
posturing and knuckle-rings, beneath the beard and bandana this Sulpice is
a gentle giant, and Johnston’s warm baritone was one of the pleasures of
the evening – equalled by his easy presence of stage and dramatic nous. He
leads a Regiment who are full-voiced and proud, but whose bikes are as big
as their hearts – despite the rather limiting dimensions of Wilton’s’
stage, they glide their wheels in neatly choreographed formations with just
the right blend of elegance and heft – and the stoical, shoulder-sobbing
upon the enforced departure of Marie is both touching and side-splitting. 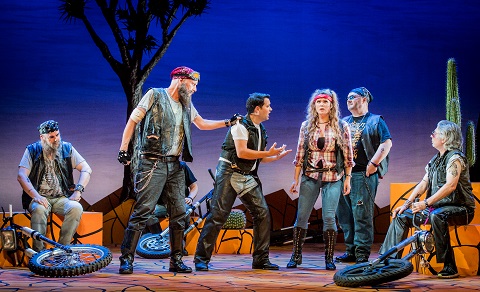 Johnston’s wise Sulpice also brings out the best in Katharine
Taylor-Jones’ Marsha Berkenfield. Glammed up in primary hues and polka
dots, Taylor-Jones steers clear of caricature and uses her beautifully soft
and sweet contralto to show us Marsha’s scruples and sincerity.

She and Robert Gilden’s Mr Hortensius make a well-balanced double-act.
Gilden’s butler minces gloriously, surreptitiously swigging a generous glug
of martini from the ‘survival-flask’ when his mistress is lost in the
mountains, and shows suave sycophantic servitude when ensuring the guests
at Marsha’s soirÈe have their champagne cravings satisfied. He has the
audience in stitches during the Act 2 overture with his oh-so-precious
peeling of the paper which wraps the oranges destined for the silver
fruit-bowl atop the Steinway, polishing each with a brisk flick of limp
wrist and feather duster. Just how he swallowed the banana that made a
surprise appearance in the fruit-box, without apparent moving his mouth, I
can’t begin to imagine.

As the titular ‘foundling-with-fathers’, Elin Pritchard wore her denim and
biker-boots like a natural, her gleeful grin and terrific pout evincing
tomboyish charm. Marie’s manic passion for wheels took a musical turn – who
knew that a singer’s rolled ‘r’s could accelerate into a “V-rrr-oom!”
“Wow!” Marie screamed in the middle of her singing lesson, when Sulpice
distracted her from her middle-class aspirational pastimes with the
gleaming illustrations in his copy of Ultimate Road Machines.

In fact, memories of home released pent-up frustrations and repressed
energies. Literally hemmed in by gawky hem-line, Pritchard stepped on the
gas and threw restraint – and her lesson music – to the wind. She kicked
off her cotton socks and turned Sulpice’s motorbike encyclopaedia into a
tennis racket: poor Hortensius’ face said it all, as his carefully arranged
orange tier was dismantled and hurtled into the audience. Pritchard enjoyed
herself immensely: she has a powerful soprano which is full of colour and
can hit the highs and make them sing. She moved easily through climbs and
peaks and negotiated Donizetti’s curlicues smoothly, but was equally
persuasive in Marie’s quiet aria of reflection as she tries to reconcile
herself to her fate. 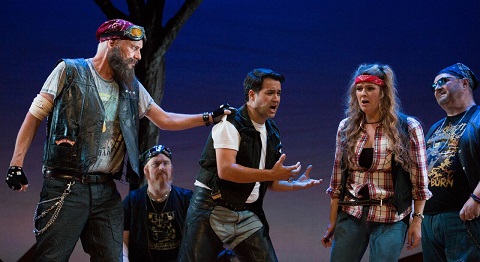 In his clean chinos and white ti-shirt, Jesus Alvarez’ Tonio – a Hispanic
immigrant in this production – was certainly out-of-place and an unwanted
interloper when he wandered into the bikers’ turf territory. Alvarez played
it safe initially, but demonstrated plenty of stamina and courage, nailing
each and every one of his high Cs which were well-supported and ringing.
The vocal acrobatics turned out to be an initiation rite into the Regiment’s gang and he passed with flying colours, slipping with
ease into his black bomber jacket. Alvarez didn’t always persuade me with a
legato line, and his English diction was less than ideal, but he blended
well in the ensembles and was an endearing Tonio.

Dulcie Crackenthorpe’s ghastly snobbishness was brilliantly captured by
Philip Cox, and he was matched for ‘style’ by Jeremy Vinogradov’s
self-loving Mrs van der Gelder. As her husband, the Governor of California,
Richard Woodall sported a finely sculpted moustache and showed surprisingly
balletic grace on the ballroom floor.

Conductor Benedict Kearns had his finger securely on the Donizetti pulse
and his tempi were wisely judged, only occasionally leaving the singers
rushing a little to catch up. The eleven instrumentalists were not housed
in the most comfortable performance space – the percussion and bass were
shoved into a cupboard under the balcony – but this didn’t hamper the
orchestral performance one iota or dampen their obvious enjoyment of the
music.

The overture was confidently played by the small ensemble, kicking off with
a ringing horn solo from Kevin Elliott. It took Kearns a while to get the
measure of the Hall’s acoustic, and the string ensemble was a little bass
heavy at times, but if the orchestra overshadowed Marsha and Hortensius in
their opening duet (for reasons of length and logic the opening chorus of
Tyrolean citizens praying for safety while a battle between their
countrymen and marauding French troops is one of Clarke’s neat excisions)
then the players soon dropped down to achieve a more judicious balance.
There were expressive solos from oboist Peter Facer and cellist Joanna
Twaddle, deepening the pathos of the more sentimental dramatic moments.

Jeff Clarke and the terrific cast gave us a joyful evening of sunny
high-spirits. No wonder the bikers let rip with some ritual air-punches and
it was smiles all round at the close. Once again, Opera della Luna served
up some seriously slick comedy.

Donizetti: The Daughter of the Regiment