Speak to the audience in Munich’s Prinzregententheater it certainly seemed
to – rightly or wrongly. I could only wish that both the work and those of
us in the audience who thought otherwise had not been treated with such
condescension. That may sound reactionary. Perhaps indeed it is; perhaps
all that matters is that those many people who enjoyed such an
‘entertainment’, to use a properly eighteenth-century word, did indeed
enjoy it. Perhaps. Let me, however, try to explain why I found this, much
fine singing notwithstanding, a somewhat dispiriting experience. 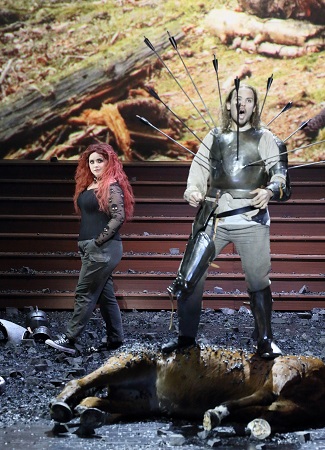 No one, I think, would claim Nunziata Porta to be one of opera’s greatest
librettists; this is not a Da Ponte, a Wagner, or a Hofmannsthal. Nor
indeed a Metastasio. However, his libretto here is, by the same token,
likely to be underestimated, precisely because of where his talents lay.
His principal occupation at Esterh·za was to adapt texts, including
provision of insertion arias. (If you do not know any of Haydn’s, for
obvious reasons far less widely known than Mozart’s, then they are well
worth discovering.) And that is what he did here, on a larger scale, with Orlando Paladino, helping Haydn create a rather extraordinary
work, a dramma eroicomico after Ariosto. Its skill lies not just in
parodying Ariosto, indeed not primarily in that at all, but in permitting
Haydn to do so and indeed to parody much else besides: often wryly, subtly,
sometimes more overtly – here, at least in one particular instance, in
Pasquale’s ‘Ecco spanio’, Ranisch worked highly successfully with libretto and music. Otherwise, I am afraid, far too little of that came
through – which was surely something a skilled production might have seen
as its purpose or at least a good part of it. 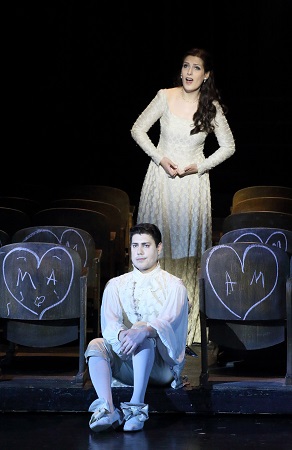 Yes, one might respond, but what if an audience does not understand the
conventions of late-ish eighteenth-century opera seria? Do we not
need to find a way of leading many listeners in? We probably do, or at
least in certain circumstances it might be a good idea. (Heaven forfend we
might actually expect some work from an audience; nevertheless, if I do not
read Russian, I do not claim the problem to lie in Pushkin.) A similar
problem, after all, seems often to be experienced with CosÏ fan tutte, which very few seem to understand – or, more to
the point, take the trouble to try to understand. (Sometimes it is not ‘all
about you’.) By all means, though, lead us in, show us what the opera is or
might be about. Ranisch, however, seemed to have no interest whatsoever in
doing so. Not unlike Christof Loy in his unforgivable

, albeit less aggressively, the message seemed to be: ‘forget about this; I
do not like this story very much, so here is another one’.

Alas, Ranisch’s new story seems to me only slightly less banal than Loy’s.
For all the filmic creativity – undeniable in its way, if hardly
groundbreaking – what we have ultimately is a new, less than captivating,
tale of a married couple who own a cinema. One of them is at least partly
gay and fantasises about the handsome Rodomonte (or perhaps the
actor/singer who plays him). When technical problems cause an explosion in
the cinema, he takes the opportunity to wander into the scenes on screen to
learn a bit more about himself. A huge amount of silly running around,
pulling faces, and so on, detracts entirely from the opera and at best has
one wonder what on earth is going on. Now there may well have been a way,
even within this particular metatheatrical framework, to engage with the
work, to do more of what I have suggested it might. It really does not
seem, though, to happen here. A pair of actors, ‘Gabi and Heiko Herz’, seem
the most honoured here. Ironically, however, the banality of their story,
the striking Cinema Paradiso homage in Falko Herold’s designs
notwithstanding, throws one’s attention back towards the singing, if only
out of desperation. We end up with another tired old clichÈ, that
eighteenth-century opera other than Mozart’s is ‘really’ only about
singing. Orlando Paladino and Haydn thus found themselves doubly
damned. 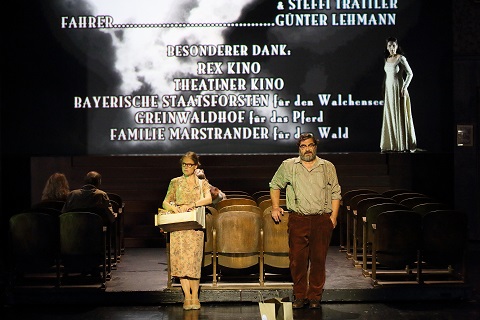 Such might have been less the case, had it not been for Ivor Bolton’s
rigid, often hard-driven conducting, which paid little attention, if any,
to Haydn’s harmonic rhythm, living if indeed it lived at all only in the
moment – perhaps not so ill-suited a complement to the production. The
playing of the Munich Chamber Orchestra was in itself excellent, however.
One longed for it to be let off its leash, though, not least for the
strings to be permitted greater vibrato. There seemed little doubt that
they longed for that too. Nevertheless theirs was fine playing, woodwind
solos especially joyous. For the real thing, though, turn on record to
Antal Dor·ti – or even, should this be your real thing and you can
somehow stand the weird perversities, to Nikolaus Harnoncourt. Those
perversities may eclipse formal understanding, or at least the
communication thereof, but at least they seem less generated on auto-pilot. 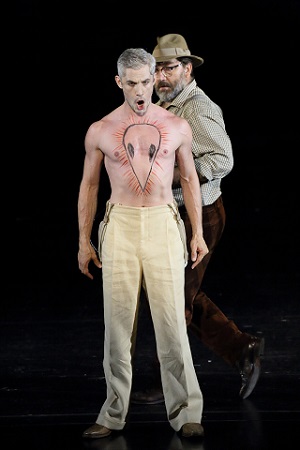 It was, then, to recapitulate – more of such formal understanding from the
conductor, please! – from the singers that considerable pleasure and
insight was to be gleaned. Mathias Vidal as Orlando trod a fine line,
sensitively and stylishly, between bravado and acknowledged weakness. So
indeed did all the male singers; such, not without a pinch of what we might
anachronistically think feminism, is indeed the point. Edwin
Crossley-Mercer’s diction was not always clear as it might have been,
especially in so small a theatre; however, his dark tone proved full of
allure – increasingly compromised allure. Dovlet Nurgeldiyev, for me one of
the true discoveries of the evening, offered almost heartbreaking tonal
beauty, whilst also making as much of the words as the production
permitted. Likewise his intended, Adela Zaharia. David Portillo, a
supremely versatile singer, finely attuned both to line and style,
impressed greatly as Pasquale; his aforementioned aria was probably the
highpoint of the entire evening. Elena Sancho Pereg, as Eurilla, proved
very much his equal: a fine foil, but also a spirited character in her own
right. Tara Erraught’s rich mezzo Alcina left one longing for more. It was
she, above all, who brought moments of true drama to proceedings. Perhaps
she, instead, should have been directing and/or conducting.