This music is in Rattle’s blood and soul (and, he conducted the first half
of the programme from memory). As a nineteen-year-old, shortly after
winning the John Player International Conducting Competition in 1974,
Rattle conducted a concert performance of Ravel’s one-act opera L’enfant et les sortilËges in Liverpool, a performance which won
him great acclaim at the start of his career; thirteen years later he
conducted the opera at Glyndebourne, confirming his natural feeling for
Ravel’s meticulously refined soundscapes, pristinely ordered forms, and
ironic wit. He has made several recordings of the works comprising the
evening’s programme, often with the evening’s soloist, the Czech
mezzo-soprano Magdalena Kozena embodying the exalted princess, ShÈhÈrazade,
or the wicked child whose tantrums result in his own torment.

Rattle’s ability to shine a gentle light between the gossamer layers of
Ravel’s orchestral scores, delicately illuminating the shifting tone
colours, subtle melodic utterances and splashes of brightness was evident
from the first few bars of the ‘PrÈlude’ to Ravel’s Ma M Ëre l’Oye, as the silky unfolding of the paired flutes and bassoon
hinted at the wide span of the imaginative world which Rattle brought
quietly but purposefully to life. And, though the dreamy wistfulness was
tinged with intimations of drama, danger was initially pushed aside by the
wonderful warmth of the string sound as the vista opened. The beautiful
string solos had plenty of space to breathe, and the solo double bass,
beneath clarinets and bassoons, slid deliciously down to the depths.

The Spinning Wheel buzzed and hummed, whirling with hypnotic momentum,
propelled by the whoosh of harp or flourish of celeste. In contrast, the
‘Pavane of the Sleeping Beauty’ proceeded with a measured tread, pizzicato
gestures disturbing the woodwinds’ meandering with a note of tension.
Rattle established a lovely waltzing lilt during the conversation between
Beauty and the Beast, finding a perfect balance between the various parts
but always encouraging those motifs that sustain the narrative to come to
the fore. The double bass pizzicatos had the feathery lightness of a
fairy’s kiss, and while Rattle ensured that contrabassoon had a dark weight
which conveyed the Beast’s menace, the transformation of the Beast was
stunningly magical – a transfiguration by harp and celeste culminating in
an expressive, warm violin solo by guest leader Giovanni Guzzo.

The even string lines at the start of ‘Petit Poucet’ (Hop-o’-my-Thumb]
painted Tom Thumb’s carefree progress through the forest and the cor
anglais had just the right degree of presence. Ravel’s exquisite classical
restraint and order was wonderfully communicated by the grace of line that
Rattle crafted. In the ‘oriental-flavoured’ transition to ‘Laidernonnette,
ImpÈratrice des pagodas (Little Ugly, Empress of the Pagodas), what Ravel
called the ‘confectionary section’ of the orchestra – celeste, harp,
percussion – sprinkled sparkling magic dust; and the vivacity was enhanced
by xylophone and gong in the ensuing pentatonic dance which was
simultaneously graceful and restless: Rattle negotiated the metrical
modulations with compelling naturalness – as if a mesmerised reader was
turning the pages of a fairy-tale with unstoppable momentum. And, then came
the glories of ‘The Fairy Garden’: the strings’ luscious tone, the slow and
grave ambience, the heart-tugging phrasing all worked their magic. Rattle
showed his feeling for the smallest temporal detail, as in the slightest
rubato at the start of the final string statement which swelled from pianissimo to a blazing triumph of swirling instrumental colour
with uplifting nobility. 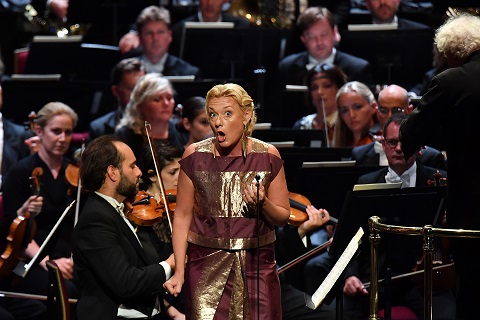 The story-telling was entrusted to Kozena in Ravel’s ShÈhÈrazade, and,
singing the vocal cycle that she recorded with Rattle and the Berlin
Philharmonic in 2012 for Deutsche Grammophon, she proved as persuasive a
narrator as her husband, who complemented the princess’s tales-for-survival
with pointillistic precision and refinement. Kozena’s mezzo was sumptuous
and radiant in ‘Asie’, unfailingly focused, even across the registers,
sultry at the bottom and shining in the middle-upper blooms; her French was
fairly idiomatic, and she was certainly attentive to the consonants even if
the vowels didn’t always have sufficient Gallic languor.

Rattle did not miss a single gesture of rhetoric, even when Ravel asks for
whispers and wisps. At the start of ‘Asie’ the asymmetrical rocking of the
cellos and cool clarinet cross-rhythms perfectly captured the slightly
uneasy blend of sensuality and latent primitivism – which finds further
expression in the juxtaposition of harp and timpani motifs – as we set off
on an exciting, unsteady but unstoppable journey.

Her mezzo almost trembling with barely repressed sensuousness, Kozena
breathed desire – ‘I would like to see eyes dark with love and pupils
bright with joy’ – as the viola and celli tremolando and songful violin
solo offered an instrumental representation of the vocal emotions. And,
just when we were on the verge of being lulled into yearnful dreams, danger
surfaced in a sudden flash of vocal fire and instrumental vigour: a vision
of ‘greedy merchants with scheming eyes, cadis and viziers, who with a snap
of their fingers dispense at will life or death.’ Perhaps there was not
enough variety of vocal colour, to match the instrumental mood- and
place-conjuring of envisioned travels through Persia, India and China, but
Rattle pushed on fervently and with a growing sense of violence and
quasi-hysteria as the princess expressed her wish to witness juxtapositions
of ‘roses and blood’ and ‘assassins smiling as the executioner slices off
an innocent’s head’. The Bb peak, ‘I would like to see men die of love or
of hate’, proved a step too high but it mattered not as the curtailed
climax was swept up in intense instrumental ardour.

Principal flautist Gareth Davies bewitched with a lovely purity and
expressive freedom in ‘La Fl˚te EnchantÈe’, and voice and ‘flute song’
blended beautifully, though I’d have liked a little more hushed mystery –
Kozena was rather forthright, especially in the faster episodes. The slow
tempo Rattle adopted in ‘L’indiffÈrent’ at first surprised and then
convinced, creating a tender and precious sound upon which the well-shaped,
silky, lower-lying vocal lines could rest. Kozena’s precision as she snaked
through the slippery chromatic lines with their enharmonic coils was
impressive: a veritable vocal spell.

The spells were rather more vicious and violent in intent after the
interval, though Rattle emphasised the symphonic dimensions of L’enfant et les SortilËges, and regardless of the
beguiling colours and moods we were offered as we danced through the score,
the wit remained more tasteful than sardonic, and sometimes, perhaps a
little too restrained? I’d have liked more sense of spontaneity and a tad
more tartness to the irony. 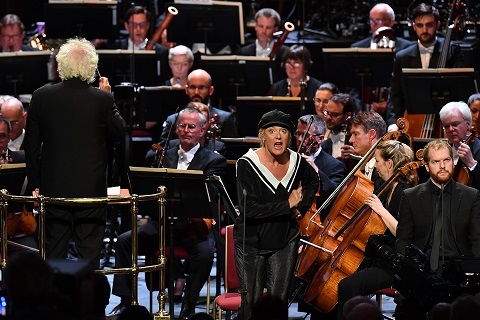 But, this is to nit-pick. Rattle synthesised the eclecticism of the score,
revealing the meticulous polish, delicacy, proportion and elegance of
Ravel’s musical language and form. The tight nasality of the oboes’
parallel fourths and fifths captured the child’s restless ennui at the
start, and Kozena, now attired in sailor suit and cap, conveyed childish
insouciance and inconsequence; subsequently, she communicated the wicked
little boy’s realisation, growth and loss of innocence most potently.

Ravel distinguishes brilliantly between the coloration of the women’s
voices, and Patricia Bardon’s mezzo-soprano had a fulsome richness
befitting the Child’s ‘Maman’ – a lovely warmth which made Bardon’s later
duet with Jane Archibald’s chirruping Dragonfly, prone to stratospheric
micro-motifs, so heart-winning. Archibald’s embodiment of both the Fire and
the Princess was one of the highlights of this Prom. She relished the
floridity of Fire’s florid declaration, ‘Away! I warm the good, but I burn
the bad!’ – what a glorious frisson she produced on the sustained high A’ –
and as the frantic flames settled and Cinders rose, grey and sullen, from
the ashes, I had a moment of revelation – so this is where Britten found
the inspiration for the wood’s ‘sleep’ glissandi in A Midsummer Night’s Dream! Removing her ochre-tinted shawl,
Archibald moved to the rear, raised behind the strings, to sing an
impeccable plaint with the flute for her lost Cavalier – what stunning
two-part modal writing Ravel crafts here – and the low flute’s sad musings
were made so much more telling by the sudden rushes of rising pitch, and by
the fantastic lustre of Archibald’s vocal climaxes. 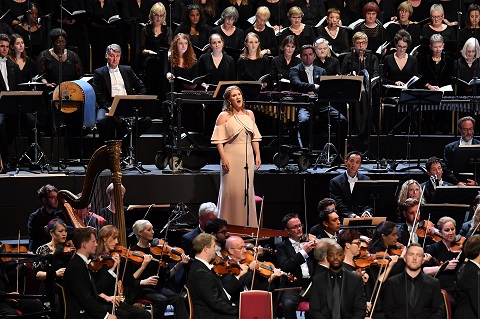 This may have been a ‘concert performance’ but there was no lack of
communication, drama and interaction. Who could not envision the Sarabande
that Anna StÈphany’s Louise XV Chair dances with David Shipley’s slightly
louche Armchair, so flirtatious were the vocal glissandi; and StÈphany’s
China Cup was similarly coquettish as it engaged in the well-known frisky
Foxtrot with Sunnyboy Dladla’s big-hearted Wedgewood Tea-cup. My only
regret was that the instrumental nether regions – bass clarinet,
contrabassoon, trombone, tuba and bass drum – were so restrained! Might
Rattle not have let them off the leash a little, and encouraged them to let
rip? 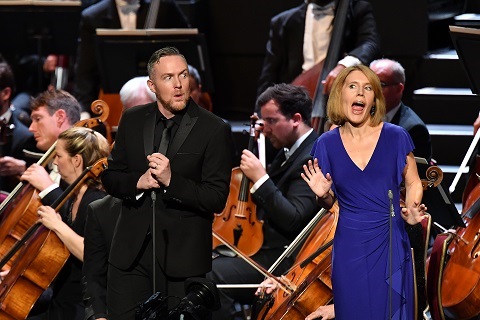 As the naughty Child swung on the Grandfather Clock’s pendulum, the
pounding desperation of Gavan Ring’s ‘Ding, ding, ding!’, and the fervency
and fluency of Ring’s urgent lyric ascents, brought a lump to the throat.
Here, there was a smarting acerbity to the orchestral sound, though it was
the honest pathos of StÈphany’s Squirrel, caged in an unnatural prison,
that brought a tear to the eye. Ring and StÈphany delivered a Cat’s duet of
seductive beauty, accompanied by visceral orchestral swoops and swoons
which showed T.S. Eliot and Andrew Lloyd-Webber the fever pitch that feline
ecstasy can reach. Elizabeth Watt confirmed a real talent for vocal
characterisation as The Bat and The Owl.

Stravinsky called Ravel ‘an epicure and connoisseur of instrumental
jewellery’, and Rattle gave us a practical demonstration of what he meant.
This was stunning instrumental scene-painting revealing the power of
musical fairy-tale to recreate the grotesque and magical, and to summon
pastoral shepherds, insects, frogs and toads, dragonflies and nightingales
in other-worldly ardour. The final garden scene was headily atmospheric. Perhaps the LSO Chorus may have been more spiteful and vicious in wielding
their ‘talons’ and ‘teeth’ to reprimand the thoughtless Child, but at the
close Rattle drew astonishingly great tenderness from his vocal and
instrumental forces: a paradoxical childlike simplicity from rich musical
sophistication – a wonder to beguile children and adults alike.