Over the years, ‘diva’ has become interchangeable with ‘prima donna’, with
both terms connoting a female singer who is distinguished by the magnitude
of her vocal prowess and her personal aura, both of which astonish, seduce
and mesmerise. More recently, diva has often been used
pejoratively, with associations of bad tempers, unreliable behaviour and
narcissism.

In her London solo recital debut, legendary soprano Aprile Millo – whose
official website is titled ‘The Golden Voiced Diva’ – reminded us of the
original meaning of the term. For the devoted fans who had eagerly gathered
in Cadogan Hall, Millo certainly is a ‘goddess’ – indeed, a critic once
described her, memorably and pertinently, as the “High Priestess of that
old-time operatic religion”. She also demonstrated why she is so revered by
devotees of the bel canto repertory. Millo has a gorgeously rich voice of
enormous power, which she uses judiciously, swelling with ease to fill the
Hall but holding back to coax us into the sentiments the song. Her soprano
is unfailingly supported, even across its wide range. The beauty of the
sound is paramount, and the phrasing is unfailingly gracious and elegant,
but there is no lack of expression and communication with the audience.
It’s no surprise that her fans revere her as the upholder of vocal
traditions and a successor to former bel canto heavyweights such as vocal
heavyweights such as Renata Tebaldi and Rosa Ponselle.

It seems incredible that after a career spanning more than thirty years,
during which Millo has performed at the Metropolitan Opera House more than
180 times, in 15 different roles, as well as in countless opera houses from
San Francisco to Vienna, Milan to Moscow, Rio de Janeiro to Tokyo, the
soprano had not previously appeared on the Covent Garden stage or in the
capital. What finally brought her to London was the invitation to give a
masterclass and perform the closing concert of the second


(6-22 August), an international music festival and academy which, in the
words of scholar, tenor and founding Director Ken Querns Langley, focuses
on “the development of young singers and the reinvigoration of bel canto”.
This year, students attended masterclasses by Millo, Bruce Ford and Nelly
Miricioiu, before presenting a Young Artists Concert at Cadogan Hall. 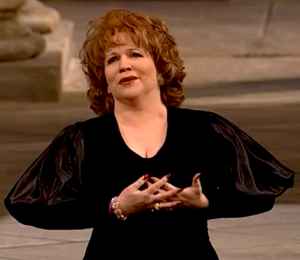 Hailed as ‘a new Verdi star’ when she stepped in to replace the indisposed
Anna Tomowa-Sintow in Simon Boccanegra at the Met in December
1984, Millo has made Verdi’s major roles the centre of her career in the
theatre and on disc, though her performances of Puccini and verismo have
been equally lauded. Millo’s programme, therefore, might have been expected
to have comprised ‘old favourites’, but the soprano had some surprises in
store. She didn’t simply give the fans what they wanted, she gave them what
they didn’t know that they wanted.

Millo, born in New York, has Italian and Irish ancestry, and this was
reflected in her programme. The first half focused on nineteenth-century
Italian repertoire. We had some Bellini and Verdi, but not well-known
arias, rather ‘studies’ – ‘La Ricordanza’, a study of ‘Qui la voce’ from La sonnambula, and ‘Insolitaria Stanza’, a study for Leonore’s
‘Tacea la notte’ from Il trovatore – as well as Donizetti’s ‘Me
voglio f‡ na casa’ from SoirÈes d’automne ‡ l’Infrascata. And, there were songs, arias
and scenes by Paulo Tosti, Ermanno Wolf-Ferrari and Lincinio Refice among
others. After the interval, Millo travelled more widely, incorporating
Rachmaninov and Massenet, in memory of Dmitri Hvorostovsky, two songs by
Richard Strauss dedicated to the memory of Simonetta Puccini (the
composer’s grand-daughter), and following these with some traditional
English and Irish folksongs, some of which were accompanied by harpist
Merynda Adams.

Given that in her repertoire choices Millo was straying
off-the-beaten-track, it was a little surprising that no texts were
provided, or at the least some brief indication of the context and/or
content of each aria. From the start of her career, Millo has made known
her disapproval of surtitles, telling The Washington Post in 1990
that, ‘They distract from the performers’ ability to weave the story, to
make it believable and make it understood. You spend a lot of money on
costumes and scenery, and then you divide attention with a piece of paper
at the top of the proscenium. It makes no sense. Opera has survived this
long without it.”

However, the sequence might perhaps have had a clearer narrative if the
audience had had a more precise indication of what Millo was singing about.
She describes her programme as “the story of a relationship in Italian
songs … there are different songs for how it goes” and explains that “at
one point the audience will decide whether the relationship is a success or
whether it’s not. And It’s a bit of audience participation”. And, so
Stefano Donaudy’s ‘O del mio amato ben’ (from 36 Arie di Stile Antico) marked ‘Falling in Love’, Paulo Tosti’s
concert aria ‘Non t’amo pi˘’ marked the ‘First Quarrel’ and both Frank
Bridge’s Frank Bridge’s ‘Love went a-riding’, and ‘Cara la mia Venezia’
from Il campiello by Ermanno Wolf-Ferrari necessitated ‘A
Decision’.

I particularly enjoyed the light-hearted simplicity of Donizetti’s ‘Me
voglio f‡ na casa’ (I want to build a house), in which pianist Inseon Lee
accompanied with charming insouciance as Millo rose with an effortless
legato to the sustained high passages. Millo relished the drama of Bridge’s
‘Love went a riding’, and both singer and accompanist were equal to the
verismo heights of ‘Grazie, sorelle’, the death and transfiguration scene
from Refice’s Saint Cecilia, Lee getting her fingers around the
mass of ‘orchestral’ detail with aplomb. It was a treat to hear these and
other unfamiliar works, such as Tosti’s ‘Sogno’ and ‘Ideale’ (‘The Dream of
Love’ and ‘The Honeymoon’, respectively, in Millo’s narrative); in these
salon songs, Millo soared through the arching lines with grandeur,
sensuality and compelling dramatic presence.

Perhaps those familiar with the chosen songs, or Italian speakers in the
audience, could discern the development of a romance, but in the second
part of the recital there was less sense of a binding narrative, and
perhaps this was because Millo herself seemed on slightly less comfortable
ground. There was no lack of vocal sheen, power and expressivity, but the
songs in Russian, French and German require a vocal style different to the
glorious weight and effortless scope of Millo’s natural bel canto.
Strauss’s ‘Allerseelen’ and ‘Zueignung’, for example, had a vibrant
intensity which seemed to overpower the long-breathed silkiness of the
vocal writing. In the folk-songs, Millo made little attempt to modify her
vocal colour, singing ‘The Rose of Tralee’ and ‘Danny Boy’ with rich lustre
and a potent vibrato, but while some purists may have demurred I found her
commitment to these songs to be compelling and the ‘art-song’ manner made
them seem personal and honest to the singer – indeed, in her prefatory
remarks she mentioned memories of her mother singing to her when she was a
child.

For her final item, Millo returned to ‘home territory’, inviting baritone
Jeffrey Carl to join her on the platform to perform ‘Ciel, mio padre’ from Aida (dedicated to the memory of Rita Saponaro Patene). The
singers, performing from memory, immediately created a persuasive dramatic
context and presented a vivid, impassioned and emotionally driven scena.
Needless to say, her fans loved it, jumping to their feet and whooping
their delight.

From the first, Millo engaged in a relaxed fashion with her audience, in
banter and through song, revealing her humour, directness and passion.
Everything was done with style, panache and a flourish – Millo even managed
to make the putting on of her spectacles a ‘grand’ gesture! – and the
intent to communicate, engage and entertain was evident and sustained. We
were far from the hushed gentility of Wigmore Hall and I was a little
surprised to find myself so absorbed by Millo’s presence and performance.
At the close, I felt somewhat exhausted emotionally – and I guess this was
what the soprano intended. She had drawn us into the songs and the stories,
suspending our disbelief by the power of her singing and of song. When
Rossini retired from the opera world in 1858, he reportedly lamented the
state of contemporary Italian singing, “Alas for us, we have lost our bel
canto”. Here, Millo showed that the bel canto tradition is in fact very
much alive.