With a cast of dreams, an orchestra of distinction conducted by Kirill
Petrenko, not to mention a world-class opera chorus, what could be not to
like? Nothing for much of the audience, it would seem. Alas, for me it
proved a grave disappointment, for which the responsibility must either lie
with me, Audi, or both of us.

I am not sure I have ever seen a production of Parsifal so lacking
in – well, anything. Goodness knows one can argue about what this work is
about, what its problems might be, what its extraordinary virtues might be,
even what it might be made to be about, and so on and forth. Goodness knows
directors can come up with execrable concepts or execute their concepts,
good or bad, less than well. I speak from the bitter experience of having
attended a good few, not least the present

, which somehow manages both to be intensely offensive in its Islamophobia and unbearably boring. 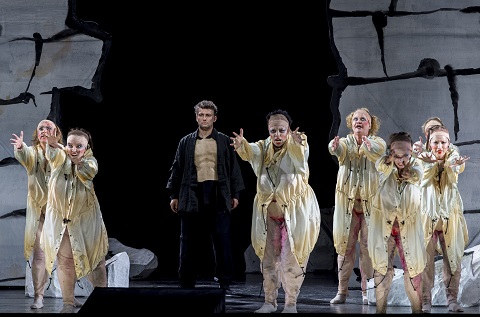 Audi, however, seems to have no discernible
thoughts about it whatsoever. I almost have nothing beyond that to say, so
shall keep the rest of this very short. Its selling point – to some, anyway
– seems always to have been designs by the strangely overrated visual
artist, Georg Baselitz. They struck me as very much in keeping with what
else I have seen from Baselitz; if you like to look at this sort of thing,
this is the sort of thing you would have liked to look at. The first act,
all of it, is set in a forest. For some reason, the knights take off their
outer clothes to reveal unflattering fattish naked suits, which suggest a
degree of androgyny, although that suggestion seems later – by the
Flowermaidens – to be refuted. The second act is barely staged at all, yet
without any of the virtues of a concert performance. The third act returns
to the forest. The end. To think that this succeeded a production by Peter
Konwitschny beggars belief. 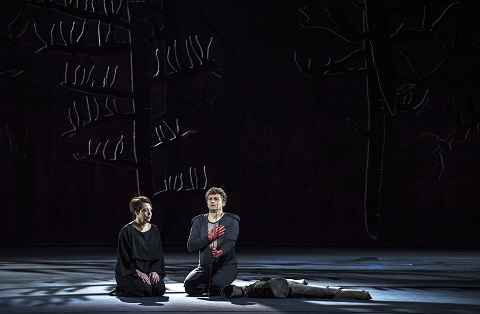 Yet so oppressive are the designs, for that is really all the production
can be, so different is the experience from a concert performance, that
much very good – although not, I think, quite so good as many seem to have
thought – musical work went largely to waste. Petrenko’s conducting was
excellent, although it never seemed to me to dig so deep as, say, the work
of a

or indeed, in days not so very distant, a

. Still, there could be no real complaints either with Petrenko or his
orchestra. His tempi in the first act, at least earlier on, felt relatively
swift; I have no idea whether they actually were. Yet they never felt
rushed; his was a fleet, at least slightly Boulezian conception, until it
was not. For there was plenty of space, well taken, to manage the work’s
ebb and flow – whilst seeming, and doubtless to a certain extent, being
managed by the work’s ebb and flow. Interestingly, the opening of the third
act, its Prelude in particular, sounded more anguished than anything in the
second. If only some of the pain implied for Parsifal’s wayfaring had been
otherwise reflected in the staging. This was certainly a reading that
developed and, by any standards, marked a fine debut run in the work. One
oddity: I do not think I have heard such feeble Grail bells. According to
the programme, however, this was a special instrument modelled by the
Bayreuth piano company, Steingraeber, after the instrument used at the 1882
premiere. If so, the Meister was – not for the first time, nor even for the
last – surely mistaken. The Bayreuth bells we know from, say, Karl Muck’s
1927 recording, in their 1926 design pack sound to my ears more impressive
in every way. Or maybe I am just too wedded to what I think I ‘ought’ to
hear. 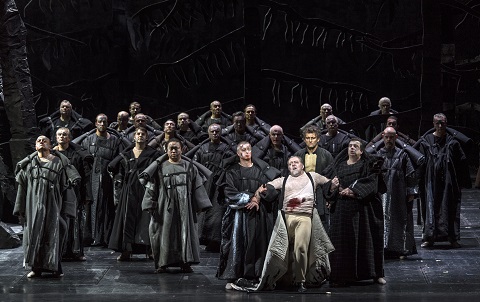 Singing was also distinguished, although it was really the Amfortas and,
perhaps more oddly, the Klingsor who stood out for me. Christian Gerhaher
has recently, surprisingly, seemed more at home in opera than in Lieder, and so it was here. His fabled beauty of tone was never an
end in itself but put to sweet, agonising dramatic work – alongside the
fascinating suggestion, apparent in his eyes if nowhere else on stage, of a
crazed, ecstatic religious visionary. Could that not have been the
director’s concept, if he had no other? It would certainly have opened up
all manner of possibilities. Wolfgang Koch’s way with words, music, and
their combination marked him out as an uncommonly excellent Klingsor – even
if Klingsors rarely disappoint. Again, one learned much simply from
observing his facial expressions. Jonas Kaufmann offered lovely moments,
lovely passages, and a great deal of verbal acuity too in his assumption of
the title role. However, his voice really did not sound as I recall it from
not so long ago; there were times when it sounded not only strained but
worn. Let us hope that this was just an off-day (a highly relative
off-day). He and Nina Stemme as Kundry were certainly not helped by Audi’s
non-production. I am not entirely convinced that this is Stemme’s ideal
role, but it is surely not unreasonable for us to adjust our expectations
according to a particular artist’s abilities and conception. Something a
little wilder either on stage or in voice, or ideally both, would not have
gone amiss, but again there were no grounds for true complaint. Likewise
with RenÈ Pape’s Gurnemanz. His beauty of tone remains, yet there
is now far more of a sense of verbal response than once there was in his
singing. If Parsifal, then, is for you primarily, even
exclusively, about singing and more broadly about musical performance, you
would have experienced something undoubtedly special. If, however, it needs
to be for you a drama too, I cannot imagine your response would have been
so very different from mine.