Well for starters, could we please have the original production back? Or another version that manages to convey the menace and import of this disturbingly contemporary peril? The SFO team of collaborators promised much, delivered a good deal, but fell short of this important work’s shattering impact.
I am a great admirer of baritone Ryan McKinny. When he is ideally cast, I have heard him as a thrilling Dutchman or full-throated Jochanaan. The role of Dr. J. Robert Oppenheimer sadly does not play to his gifts. While Mr. McKinny was always engaged and highly musical, his handsome instrument just doesn’t have the easy, ringing top needed to succeed completely in the role. Ryan worked hard, earned my admiration, and always displayed the highest professional standards, but ultimately could not anchor the production as Oppenheimer should.
Conversely, Daniel Okulitch was in splendid, refulgent voice as General Leslie Groves, indeed I have never heard him sing better. The macho snarl in his cogent delivery made a powerful impression. Mr. Okulitch, too, was curiously miscast. The General is meant to be portly, indeed there is a lengthy, humorous “cake “ section about his having to watch his weight and diet. That makes little sense when the lean, handsome actor has made previous SFO shirtless appearances that had patrons scrambling for their binoculars. 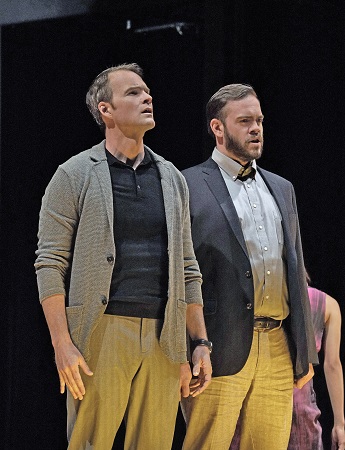 Ryan McKinny (Robert Oppenheimer) and Andrew Harris (Edward Teller). Photo credit: Ken Howard for Santa Fe Opera 2018.
Andrew Harris’ characterful, measured bass was a good fit for physicist Edward Teller. Meteorologist Frank Hubbard was exceedingly well served by Tim Mix’s steady, powerful baritone. Apprentice tenor Mackenzie Gotcher performed with distinction as Army Captain James Nolan. The always reliable, sweet voiced, stylish tenor of Benjamin Bliss (Robert Wilson) on this night sounded veiled on top. I think this may be the result of the Adams-mandated miking.
It is hard to judge opera singers’ true accomplishment when a sound mixer is in between. Mssrs. Okulitch, Mix, and Harris were least impacted, while the other men sounded tinny (especially handicapping McKinny). Having seen the original twice, I was never “aware” of the amplification as I was here. There is no one in this capable cast that wouldn’t have fared better without it. Happily, the ladies were not so afflicted. 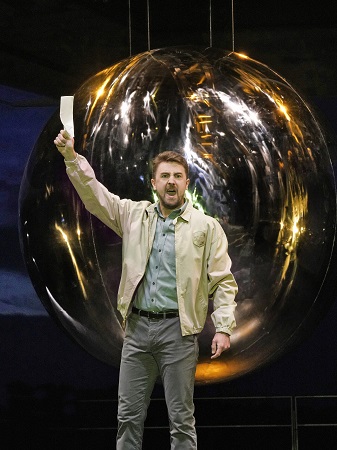 Ben Bliss (Robert Wilson). Photo credit: Ken Howard for Santa Fe Opera 2018.
Julia Bullock was everything one could wish as she created a haunting, melancholy, determined Kitty Oppenheimer. Ms. Bullock’s shining, supple soprano is in complete service to creating a three-dimensional portrait of the hapless spouse. Her touching interpretation of “Am I in Your Light” was alone worth the trip. Her poignant legato phrases were matched in beauty by the urgent delivery of conversational passages. This was a triumphant role assumption by a young artist at the height of her powers and on the precipice of her stardom.
Meredith Arwady’s powerful, rich contralto always adds immeasurably to any show, and her secure reading of Pasqualita was no exception. Ms. Arwady left us wanting (much) more. The biggest star of the night might just have been the Young Apprentice opera chorus, meticulously groomed by chorus master Susanne Sheston. From the very first choral statements they served notice that they were here to make thrilling music, flawlessly articulated, and dramatically compelling. Their high caliber contribution would be welcomed at any opera house in the world. 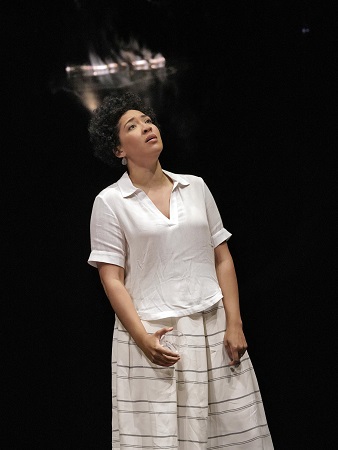 Julia Bullock (Kitty Oppenheimer). Photo credit: Ken Howard for Santa Fe Opera 2018.
The overall musical effect was variable. Early on in the night, after the second or third unsteady passage occurred, I trained my eye on conductor Matthew Aucoin. His stick technique was not what I expected for a score demanding such precision, but rather consisted of a loop of bobbing and waving. The experienced instrumentalists seemed sometimes to be not so much playing together as clinging together. Maestro Aucoin has obvious enthusiasm for the piece, but I urge that it be wedded to more accuracy with the baton.
It has to be reported that throughout Act I a torrential, violent thunder and lightening storm eclipsed any drama to be found on the stage, and some string players had to retire momentarily to preserve their instruments. That did not help, but also did not cause the imprecision in the ensemble.
The storm also caused any number of unintentional (and hearty) laughs. After a particularly loud thunderclap, Oppenheimer’s next line was: “What if it’s a dud?” There is much tense discussion about the weather in the waning pages of Act I, since it will impact the test and the potential spread of radioactive fallout. The actors were thwarted in increasing the dramatic stakes by constant titters at dialogue about unfortunate weather. But truthfully, well before Mother Nature intruded, the dramatic progression was already dampened. 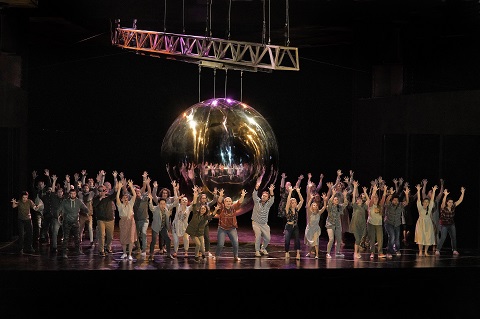 Santa Fe Chorus. Photo credit: Ken Howard for Santa Fe Opera 2018.
David Gropman’s well-intended set design is dominated by the omnipresent “bomb,” in the guise of a suspended silver, reflective globe (think: a really really oversized Christmas ornament). Selected industrial set pieces are added and subtracted beneath it, and the ball tracks up and back, but what you see is all you’re going to get. Since all is revealed up front, there is no impending visual impact, never any unsettling “tease” about what this thing looks like and what it does.
A plus side is that the surface takes light well, and designer James F. Ingalls has made good attempts to make it look menacing, or at least colorful. I wish Mr. Ingalls had gone further in isolating key dramatic moments, especially Oppenheimer’s anguished aria, “Batter My Heart” which inexplicably left the hero on a fully lit, un-atmospheric stage.
Gabriel Berry’s costumes were period, correct, and awfully plain in their palette. The dancers were more fancifully attired, although Emily Johnson’s choreography was a puzzle to me. I am fine with the gestures not telling a story, but shouldn’t they at least reflect the music? In a critical, troubling, angular, unsettling musical bridge, the corps remained resolutely gently undulating. 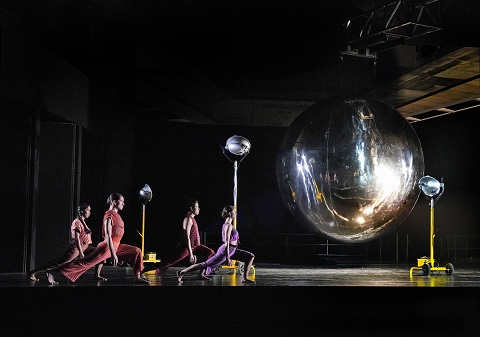