Although the production raised questions at times, with what some purists
may decry as gimmicks, the performance overall presented a dark and
searching exploration of the themes of power, age, love and loss. Here was
a highly enjoyable and memorable examination of the human condition.

Taking its narrative from the First Book of Samuel, Handel’s oratorio
– first performed in 1739 – explores the descent of King Saul,
where respect for young David (who has just slain Goliath) rapidly turns to
hateful jealousy of the younger man’s popularity.
Glyndebourne’s revival of Barrie Kosky’s 2015 production for
the Festival brought more than a streak of tragedy: here was an emotionally
compelling performance full of instrumental and vocal colour.

Countertenor Iestyn Davies took the role of David, who alongside the
lustrous singing of tenor Allan Clayton – who played Jonathan, King
Saul’s son – provided the soloistic highlights of the evening.
In the First Act, Davies provided moments of genuinely heart-stopping
beauty, the lyrical power of his voice evident when the orchestra suddenly
cut out, leaving the countertenor sustaining a single note on a crescendo.
With masterly awareness of dynamics coupled with a silky upper register,
Davies displayed a vocal control few can match. Captivating. Allan Clayton
was similarly expressive, again especially striking when the texture was
most exposed; there were moments when the orchestra fell silent, leaving
Clayton singing quietly alone, his voice full of lyrical warmth. This was
music-making of the most controlled, sensitive and nuanced degree.

Topping off a superb cast, German baritone Markus Brück played King
Saul in what is his Glyndebourne debut, alongside Handelian soprano Karina
Gauvin as Merab, Saul’s daughter. Brück’s voice was richly
expressive, bringing out the darker colours in this most troubled of
characters. Although the libretto, in my eyes at least, hardly portrays a
character of great psychological complexity – the King declines to
madness within the blink of an eye, hardly the nuanced depiction of madness
and decline in Shakespeare’s King Lear – Brück
presented a character full of emotional contrasts with a voice similarly
replete with juxtaposing colours. Gauvin was equally impressive, her duet
with Davies at the opening of Act 3 full of urgency.

Also in particularly fine form were The Glyndebourne Chorus, whose voices
provided both musical and dramatic delight; at the point in which Saul is
confronting his madness explicitly, The Chorus stride right up to the edge
of the stage, feet from the audience, their powerful singing dominating the
space in an effective recreation of the voices swirling through the
monarch’s mind. With Kosky’s creative use of space and The
Chorus’s dramatic projection of their voices, this was a supreme
example of how imaginative production and performance can combine to create
the most vivid portrayal of a text. The Glyndebourne Chorus’s
forceful fortissimo singing and vivid characterisation were one of the
highlights of the evening.

The Orchestra of the Age of Enlightenment conducted by Handel expert
Laurence Cummings were also brimming with energy. The opening was full of
bounce, whilst a consistently transparent texture allowed us to hear every
delightful imitation in Handel’s intricate scoring. One of Saul’s unique points is its orchestration, with trombones
evoking sackbuts, playing alongside kettledrums (which Handel borrowed from
the Tower of London, no less), harp and carillon (a keyboard-glockenspiel).
The score is therefore packed to the brim with colour, and Cummings made
plentiful use of this, pointedly emphasising specific moments of
instrumental contrast, most notably the tenderness of a theorbo (played by
David Miller) accompanying the scene in which a declining Saul is cradled
by Allan Clayton’s Jonathan. 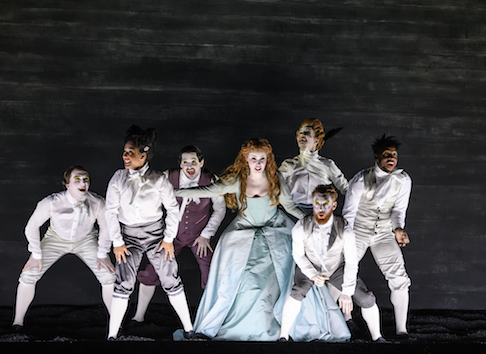 The production itself memorably played on the theme of light and dark, with
effective use of stage lighting; the spotlight at the very start gently
grew so as to expose the severed head of Goliath on stage, whilst later on
the all-white tablecloths that dominated the stage dazzled the audience
with light, perhaps a comment on Saul’s growing emotional blindness.
A production highlight was the set for the final act, where hundreds of
candles lined the stage, only to be gently extinguished by the chorus; this
warm orange glow slowly reduced to darkness, Kosky’s staging here was
a poignant moment of visual poetry.

However, if I am to make any criticism of this fine evening, it was that at
times the production gave way to what some purists might decry as
gimmickry; six dancers would rush onto the stage, sometimes after moments
of exquisite emotional tenderness, and start gyrating at the edge of the
stage. Although it brought a few laughs from the audience, I wondered
whether the frequency of these interruptions was necessary, with the
dancers breaking the flow of the narrative and wrecking the emotional
tenderness that made many of the scenes so striking. Similarly distracting
was the regularity of the shrieks and screams from the chorus, which
– although a superb way of evoking the distress and the very humanity
of the characters onstage – came so frequently that they detracted
from their power. One scream would be striking, but ten or eleven become
plain distractions.

Despite this small criticism, to the production’s credit,
Kosky’s minimalism brought us back to the world of Ancient Greek
tragedy, most appropriate for this Lear-like narrative; in having
minimal distractions on stage in the way of set design, Kosky allowed us to
focus on the human beings that are at the centre of this tragedy. Such an
exposed stage drew greater sympathy from the audience because, when Saul
was sat alone with just his closest family near him, his isolation was made
painfully clear. Kosky appears to find that the inherent drama in
Handel’s oratorios – even if they are not strictly operas, they
are operatic by nature – is suited to the similarly dramatic nature
of Greek theatre.[*] The
influence of Greek Tragedy reminds us that, whilst this story is taken from
the Bible, there are numerous parallels to Tragic plays and theatre in its
progression, something Kosky’s production magnified with great
effect.

An evening full of horror, delight, humour and despair all at once, this
was an emotionally compelling and beautifully-performed evening. They say
that a tragic story can be cathartic; no wonder everyone emerged from the
theatre so full of life. An excellent evening.

[*]
According to Grout & Williams, “Wearied by the material difficulties and discouraged by the waning fortunes of opera, Handel had already begun in the 1730s to turn his attention to composing oratorios: Saul and Israel in Egypt were performed by the end of that decade, and in the following years came some of the other masterpieces by which the composer is best known today.” (p. 187)

[†]
Jack, who has written for Opera Today, was invited by Glyndebourne to review their production of Saul as part of an initiative to engage younger writers in opera and opera criticism.