And the best it was, though Canadian born Europe based conductor Yves Abel had some formidable competition for being the star of the show, namely 88 year old Pier Luigi Pizzi who staged it. In turn Signor Pizzi was upstaged by Italian baritone Davide Luciano, Seville’s factotum Figaro. But even he disappeared into the shadows when Russian tenor Maxim Mironov cut loose with his brilliant “Cessa di piu resistere,” that closes the show.
Never has the patter been more cuttingly precise at breakneck speed than when Italian bass baritone Pietro Spagnoli unleashed his “A un doctor della mia sorte” nor has the malicious pleasure of “La calunnia Ë un venticello” been more indulged than when intoned by Italian bass Michele Pertusi. 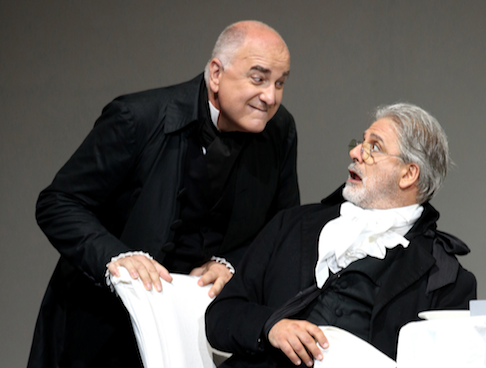 Michele Pertusi as Basilio, Pietro Spagnoli as Bartolo
That Rossini himself became the true star of the show can only be credited to stage director Pizzi who stripped the comedy of any specific scenic context using only a white box, anonymous white architecture, white furniture, a visual technique that thrust his actors and Rossini’s singers into high relief. The octogenarian stage director instilled an energy of personality into this production that effected the comic process — the triumph of youth over age — in monumental terms. It was the all too rare proof that Il barbiere is indeed one of the repertoire’s greatest masterpieces.
The overwhelming atmosphere of the production was that of youth, from Fiorello, sung by Venetian baritone William CorrÚ, to Almaviva and to Rosina, sung by splendid Japanese mezzo soprano Aya Wakizono, and finally, and even most of all to Figaro who stripped to his culottes, jumped into the fountain and then did a beefcake parade along the catwalk fronting the orchestra pit regaling us with his “Largo al factotum!”
None of this possible, of course, without conductor Abel who propelled Rossini’s numbers onto plateaux of lyricism that bordered on delirium. Of greater accomplishment was perhaps the pacing the maestro imposed on Rossini’s parade of blockbuster numbers, allowing us to savor each of them to the fullest but leaving us resource to sink ourselves into the opera’s two gigantic finales.
There was virtually no comic schtick (sight gags) in Pizzi’s production, the innate charm of each of its virtuoso singers needing no embellishment to create character. Except the music lesson scene which itself is nothing but schtick, and usually annoying. Director Pizzi solved this in simple strokes. There was no piano. Fiorello mimicked a cello for “L’inutil precauzione” conducted by Almaviva disguised as a dwarf. When it was Bartolo’s turn to show how to sing Sig. Spagnoli leapt into falsetto soprano! 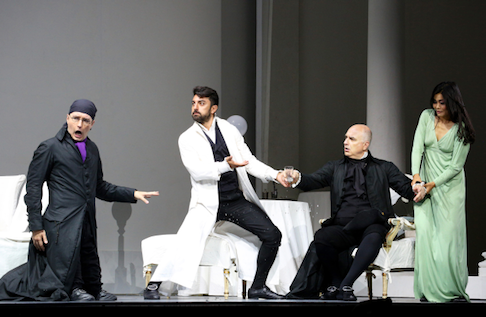 Almaviva disguised as dwarf music teacher [shoes on knees], Figaro, Basilio and Rosina
Note that before the performance I had spotted three little people among the spectators. Hopefully they enjoyed the comedy of such travesty (Almaviva had shoes on his knees) made transparent when Almaviva jumped to his feet from time to time when Bartolo wasn’t looking).
Not to forget that the storm was nothing more than the throes of fever that overtook Rosina when she thought Lindoro was betraying her, reinforcing stage director Pizzi’s firm commitment to comedy of character.
Esteemed Italian character mezzo soprano Elena Zilio sang Berta, sharing the tasks of Ambrogio, charmingly and broadly played by actor Armando de Ceccon, with little more to do that just be there to answer the door and bring in the laundry. Sig.ra Zilio’s “aria di sorbetto” “il vechhiotto cerca moglie” was met with huge applause. Note that in Rossini times sorbet was hawked near the end of a performance where such secondary arias were placed.
Sig. Pizzi directed, designed both sets and costumes, and designed the lighting with his associate Massimo Gasparon. The elegance of the costume design — abstracted formal wear in black and white, with Rosina in various solid colors — well served the elegance of the singing.
In his formative years Pier Luigi Pizzi worked as a designer with Giorgio Strehler and Luca Ronconi, incorporating much of mid-twentieth century Italian avant garde into his theatrical vocabulary. He made his Pesaro Rossini Opera Festival debut in 1982 with Tancredi. During the 1980’s as well he both designed and directed productions at San Francisco Opera, notably Simon Boccanegra, Semiramide and Orlando Furioso (though these credits are not included on Wikipedia). His productions have appeared in all of the world’s major theaters.
The male chorus of the Teatro Ventidio Basso (an historic opera house in Ascoli Piceno, a town halfway between Pesaro and Rome) was the raucous police force. The Orchestra Sinfonica Nazionale Della RAI (Italian Radio/Television) were the polished collaborators of maestro Abel.
Michael Milenski