Grand Opera was not Sullivan’s natural medium though, and he turned next to
“Light Opera” with Haddon Hall (1892), the work which inaugurated
the final phase of his operatic career. Here, finally, he found his true
level and produced, arguably (and many will argue!) one of his finest
scores.

“Light Opera” is a term not much used nowadays, which is a shame, for it
succinctly expresses the style and ambition of a work like Haddon Hall. It aims to be easily enjoyable, tuneful, operatic
entertainment, generally with a happy ending, but at the same time seeks to
treat emotional situations with a level of seriousness generally eschewed
in operetta. The danger, always, is that it falls between two sets of
audience expectations: for Wagnerians and Verdians it is too trivial to be
part of operatic history at all, while for lovers of operetta, musical
comedy, and the modern musical, it aims too high, in one way or another.
Perhaps part of the problem is that there is no clear tradition or canon to
which to appeal. Yet Cimarosa’s Il matrimonio segreto (The Secret
Marriage), exactly a century older than Haddon Hall, might be
considered a perfect example of the genre, and the fact that critics have
lined up for two centuries to declare it “not Mozart” succinctly sums up
the sort of downward comparisons with which Light Opera has always had to
contend.

But Haddon Hall does not suffer only from this sort of
pigeonholing. It is disadvantaged by a rather problematic libretto by
Sydney Grundy (1848-1914), who had previously collaborated with Sullivan’s
1880s rival, Edward Solomon. Grundy based the opera on the legend that
Dorothy Vernon, daughter of Sir George Vernon, the owner of Haddon Hall in
Derbyshire, eloped with her lover, John Manners, in 1563. (For David
Trutt’s superb study of the sources Grundy had for this, see

.) This was not enough for a two-hour opera, of course, so Grundy expanded
it with a plotline which could have been inspired by Jane Austen’s Pride and Prejudice: Sir George’s family will lose Haddon Hall to
an odious cousin, a sanctimonious humbug, unless this odious
cousin can be persuaded to marry a daughter of the house – Dorothy (unlike
in Austen) being the only option. So far so good, but then Grundy made a
very questionable decision to add Historical Significance to the story by
moving it forward to the period of the English Civil War and making Manners
a dashing royalist and odious cousin Rupert a Puritan. There is none of the
fine aspectual balance Bellini and his librettist, Carlo Pepoli, brought to I puritani (1835), or that can be found even in Michael William
Balfe’s The Puritan’s Daughter (1861). Haddon Hall simply
proposes that the Puritans were comically absurd and hypocritical and that
idea, once introduced, rather takes over the opera. This is a shame,
because there are suggestions, at times, that something deeper is trying to
emerge about continuity and tradition in English history, as in the opening
chorus: “Ye stately homes of England, / Long may your towers stand; / Types
of the life of man and wife, / Types of our English land!” 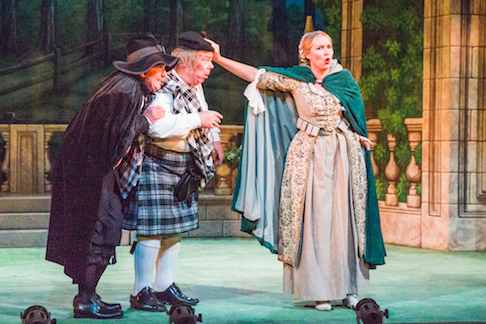 Richard Suart as Rupert Vernon, Bruce Graham as The McCrankie, and Bee Bradley as Dorcas

The heavy emphasis on Puritan hypocrisy leaves surprisingly little stage
time for Manners, the ostensible hero of the story. In the first two acts
he appears for a total of barely fifteen minutes, and there is a theory
that Sullivan actually wanted to cut him from the first act entirely (a
theory marmorealized in the 2000 Prince Consort recording). In terms of
realism and dramatic impact this actually works rather well: a man planning
an elopement is likely to keep a low profile. On the other hand, though,
Manners is inevitably a rather two-dimensional character, and from the
musical point of view we want more from him. Preparing the work for an
amateur revival at King Edward VI School, Retford, in 1992, to mark the
centenary, Martin Yates and David Eden were sufficiently impressed by these
weaknesses to attempt a partial rewrite. The biggest change in their
version is that, in Act 1, it is Manners himself, not his servant Oswald,
who disguises himself as a pedlar so as to safely approach Haddon Hall. One
can readily appreciate the sense of this, for it blurs the line between the
romantic elopement plot and the surrounding comic business; in Grundy’s
original these seem quite distinct, even to the point of representing
different levels of reality. But blurring the line in this way pulls the
whole opera more firmly in the direction of comedy which runs, I think,
counter to what Sullivan wanted to achieve in Haddon Hall. The
Yates/Eden revisions do not all pull in this direction, though. They locate
the story more firmly in the 1650s, and even date the action, putting the
first two acts in 1652 and the third in 1660, the year of the Restoration.
This astonishingly long interval makes the elopement seem more significant
than it otherwise would, suggesting that, rather like Leontes in
Shakespeare’s Winter’s Tale, Sir George must thoroughly repent his
conduct before his family can be happily reconciled.

First brought out at the Buxton Opera House on 2 August, then at the 25th
International Gilbert and Sullivan Festival in Harrogate on 17 August, the
National Gilbert and Sullivan Opera Company production of Haddon Hall was billed, remarkably, as the first professional
production since 1899. Merely by existing, then, it becomes a production of
some historical importance. It uses the Yates/Eden rewrite. As a primary
goal was obviously to make the opera commercially viable, to have it
performed by G&S veterans, and to appeal to the established G&S
audience, this was an understandable decision, and one very much vindicated
by the result, which was a delight from first to last. Sarah Helsby Hughes,
the director, made intelligent use of a single set for all three acts (a
walk immediately outside Haddon Hall), and the cast, in their loosely
period costumes, exuded a sense that they too were having tremendous fun
with the material, which they carried off with great panache. There was,
admittedly, a certain amount of what Charles Lamb called “sub-referencing,”
that is to say a sort of winking at the audience, which again I suspect was
not quite the style of performance Sullivan wanted, but I readily accept
that G&S veterans would have serious difficulties playing such a text
straight.

G&S people often like to say the score of Haddon Hall is
“uneven,” which sometimes seems to be a sort of critical shorthand for “not
as good as The Mikado.” But I’m reminded of William Wordsworth’s
complaint about those critics who look for “prosaisms” in poetry and
“imagine that they have made a notable discovery, and exult over the Poet
as over a man ignorant of his own profession.” Wordsworth’s point was that
any good poet, writing a longer poem, will not aim at a uniform level of
poetic “elevation.” Sullivan must have sensed the danger that Puritanical
comedy could take over the opera, and it is likely he remembered, with some
embarrassment, that “Ho, jolly Jenkin” had proved the most popular number
in Ivanhoe. Thus, it seems to me, he aimed to construct a score in
which the most memorable and lyrical music is linked to the “elevated”
emotions engendered by the elopement plot, while more “prosaic” music, to
use Wordsworth’s term, serves for the comic digressions. This, then, is unevenness with a purpose and point, guiding the audience’s responses, operating within a score unified by an attractive tinta designed to evoke Old England.

In this respect, the new production almost got things just right. The
central character, Dorothy, who gets the most difficult music, was
beautifully brought to life by the radiant soprano of Rachel Harland. She
was able to convey the serious emotions lying at the centre of the story,
and gave it the sort of human heartedness Sullivan would undoubtedly have
wanted. The other female leads were also very well cast: Katherine Marriott
as Lady Vernon, the sympathetic, longsuffering mother, and Bee Bradley as a
delightfully vivacious Dorcas, Dorothy’s supportive maidservant who herself
finds love in the course of the opera.

With the men, things were only slightly less satisfactory. Donald Maxwell
was excellent as Sir George, giving a slightly sardonic edge to the
character that was perfectly appropriate for a man trying to cut his losses
after the Parliamentary victory. Bruce Graham was also excellent as The
McCrankie, an unnecessary comic character Grundy worked into his libretto,
who represents the acme of Puritanical hypocrisy. Cousin Rupert is the most
challenging acting role in the opera, and Richard Suart made a good stab at
it, but he played a bit too much to the audience, and his comic
interactions with The McCrankie were made to seem more consequential than
his usurpation of the Vernon estate (though Grundy must take a good share
of the blame for the imbalance). Nicholas Sales as Manners was tripped up
by the Yates/Eden rewrite. He was superb in his initial apparition as “Jack
the pedlar,” but it was consequently difficult to shrug off that image of
him as a lively young imposter enjoying himself a bit too much. David
Menezes as Manners’ servant Oswald lost his big opening number as a result
of the revision, but during that number was seen at the back of the stage
renewing his relationship with Dorcas (the relationship does not originate
in the course of the action, another change). It was difficult, both then
and later, to think of him as any sort of servant, but he was very good as
an ardent lover with mischief in his eyes.

Altogether, this was a highly commendable attempt to revive an unjustly
neglected opera containing some of Sullivan’s loveliest music, and it was a
privilege to witness it. Further good news for Haddon Hall lovers is that
the Sir Arthur Sullivan Society is planning the first ever professional
recording of the work. Perhaps its time has finally come.