Though Wagner’s comedy is only comedy in so much as it is the triumph of youth over age unless maybe you find the caricature of the N¸rnburg town clerk Beckmesser to be amusing, or maybe you find it a bit amusing that a pretty young German girl is courted by three men, a young man and and old one and a Jew. Fortunately, like all comedy, the situation gets properly resolved — in Bayreuth youth is poised to renew an already perfect world.
Director Barrie Kosky does however take the comedy idea very seriously and creates Meistersinger’s entire first act as schtick. It takes place in Wagner’s Bayreuth home, confusing Wagner with Hans Sachs, Cosima Wagner with Eva, Franz Liszt (Cosima’s father) with Eva’s father Pogner. Wagner and Liszt play a mock piano duet, and later nine medievally dressed men climb out of the piano (how many clowns fit into a VW?). And these gimmicks are just for starters in this deft transposition of St. Catherine’s church into Wagner’s salon. 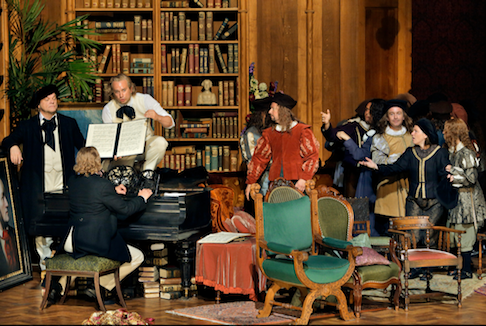 Volle as Wagner, G¸nther Groissbˆck as Liszt, Klaus Florian Voght as Walter with the mastersingers
At the act’s conclusion the Wagner residence dissolves into the apparition of a large, secular, quite empty room (hall), the signal that the fun is over. Thus we have our first suspicion that not only will the first act Wagners-at-home-sitcom become a play superimposed upon a play, but that there will be and even bigger, totally public drama. From hints in the sitcom (Cosima’s Jewish lover, conductor Hermann Levi AKA Beckmesser is humiliated) of course we know what the drama is about.
The Barrie Kosky second act is anti-comedic in that we have no context in which to place the complex Wagner/Hans Sachs story. The Wagner household furniture is piled up on a dark stage and we see little else. The N¸rnberg intrigues begin, and things get messed up to the degree that there is a storm (as in Rossini’s Barber) though it is not a bit comedic (funnily enough a clock does run backward). Wagner’s storm is completely musical, an outburst of 56 independent voices! Director Kosky renders the midsummer night riot as a pogram, and indeed for Wagner this ethnic hysteria is not a farfetched musical scenario.
The third act is back to schtick. Director Kosky brings the private and public situations to trial, and we do have a quite specific and certainly witty comedic context — sessions of the Nurnberg Trials. There are personal testimonies that resolve into the Rossini moment when absolutely everything stops, the startled principals are absolutely stunned — thus the glorious private celebration that is Wagner’s sublime quintet. 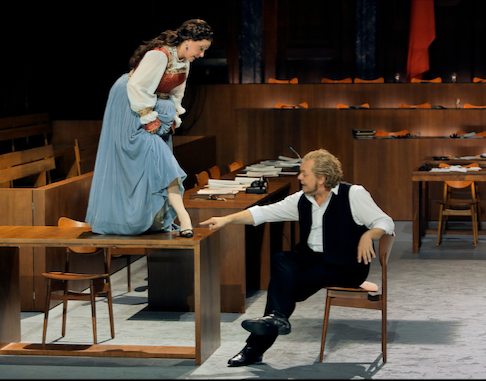 Emily Magee as Eva, Michael Volle as Hans Sachs
And then there are public testimonies that are distantly reminiscent of the music lesson in Rossini’s Barber. Beckmesser is ruthlessly ridiculed.
Finally it becomes the public resolution that we have been waiting for, everything becomes what it must be. And that is a celebration of a music that will endure within director Barrie Kosky’s world, and in our world, no matter what its content may be. A full symphony orchestra magically slips onto the stage. It is Nurnberg’s beloved Hans Sachs or more precisely it is Wagner himself who conducts the opera’s monumental farewell, its magnificent hymn to German art.
Keep in mind that the on-stage symphony orchestra is in addition to the ninety or so players in the Festspielhaus’ invisible pit — an additional reminder that German art as practiced in Bayreuth is indeed magnificent,
For all its comic magnificence this Bayreuth Die Meistersinger was a subdued affair. Conductor Philippe Jordan’s persuasive orchestral well upheld the glories of the Festspielhaus’ famed acoustic but his reading of the mighty score did not command attention. The great moments were musically flaccid (for example the Act II riot, and in fact the Quintet), possibly rendered such by Mr. Kosky’s shocking staging that often dramatically overpowered or sometimes simply flattened these moments. The musical effect was further dampened by the miscast Eva (British soprano Emily Magee) who brought no vocal or dramatic focus to her pivotal scenes within the larger Kosky dramas (and possibly as well by the controversially light voiced Walter).
With this one Anglo-Saxon exception the balance of the cast was German or Austrian and deeply satisfying. The Hans Sachs of Michael Volle is well known, and shown to perfection in this complicated production, as did the Beckmesser of Johannes Martin Kr‰nzle (who took the second to last bow!). Tenor Klaus Florian Voght is an exceptionally light lyric dramatic tenor (jugendlicher heldontenor), an ethereally voiced singer who is evidently appreciated on some Wagnerian stages as Mr. Voght is legacy casting from the 2017 Bayreuth Meistersinger). His thin, boyish, pure-toned voice did not create a convincing vocal Stolzing presence, though he well upheld Mr. Kosky’s character needs. G¸nther Groissbˆck well fulfilled his role as Cosima’s bewigged father Lizst and was exceptionally sympathetic as Eva’s father. Tenor Daniel Behle held powerful sway as Sach’s apprentice David, as did Wiebke Lehmkuhl as Eva’s maid Magdalene, both artists assuming more musical presence in Wagner’s thick score than the Eva or Walter.
For the record, the trepidations one may harbor about the storied lack of comfort of the Bayreuth Festspielhaus may be put to rest. The benches are padded, there are backs and you are not crowded. Normally the thrill of simply being in this august temple of Teutonic art will overcome all climatic discomfort (it can be warm). The one-hour intermissions are appreciated because normally after a Bayreuth act you have a lot to chew on before taking on more. Refreshment is, contextually, reasonably priced.
Michael Milenski