Former composer in residence Lembit Beecher is well known in the city, not least for last year’s intriguing staging of I Have No Stories To Tell You. He has grown considerably even since that commendable accomplishment.
While that piece was driven by flashbacks, Sky on Wings is a surreal journey into Alzheimer’s in which there are fewer if any memories. The (in-)action is moving into an uninformed future, which in actuality becomes just a muddled “now.” Hannah Moscovitch has crafted a lean libretto that cunningly contrasts the condition of the institutionalized, hallucinatory Martha with the still occasionally lucid, but desperately degenerating Danny.
But this is anything but a maudlin wallow, thanks to the wit and clarity of Ms. Moscovitch’s cogent dialogue and monologues, and owing to Mr. Beecher’s skittering scoring that occasionally settles into lush, serene moments that can take your breath away. Too, the scripting allows the two main characters to inevitably develop a satisfying co-dependence that blessedly eschews clichÈ. 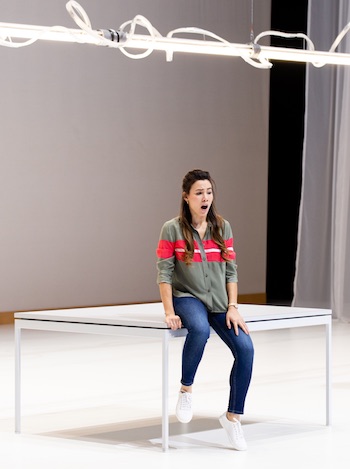 Sharleen Joynt as Winnie [Photo by Dominic M. Mercier]
There is a four-person chorus of Elders that not only contributes to the unease of the sound world, but also performs smaller featured moments. There are many sound palettes in the composer’s arsenal that evoke echoes of Stockhausen, the layered dissonances, the muttered gibberish, the occasional Sprechstimme, the leaping vocals. But the conversational rhythms and vocal lines are distinctly Beecher’s. The masterful orchestration with its exposed solo winds, rackety brass, slithering strings, manic keyboard licks, and tricky ensemble requirements made a vibrant impression in the intimate Perelman Theatre.
That is perhaps largely owing to conductor Geoffrey McDonald whose concise, minimalist baton work unleashed accuracy and fire from his players and vocalists. This is such a tightly interwoven, often restless creation that one slip could be fatal, but Maestro McDonald’s laser focused attention to detail brought the score thrillingly to life. That the cast could not have been bettered was probably because the roles were created with (at least two of) them in mind.
Beloved star mezzo Frederica von Stade as Danny takes the most linear journey in the show. Her character is an accomplished professional, admired for her intellect and her writing, who is woefully aware of her debilitating affliction. I don’t personally know Ms. von Stade’s age but I do know that she wowed me as a definitive Cherubino in the 1970’s and well, I know how much older I am now.
Remarkably, her singing has lost little of the fresh, immediately ingratiating quality of her earlier career. While there is a noticeable break between registers today, she still commands secure tone and admirable technique. Indeed, when vocal lines carry her to impassioned, sustained outbursts above the staff, Flicka can still pour out heated, gleaming high notes. Moreover, she remains a superb actress. Her conflicted state runs the gamut from anger to self-pity to determination to defiance, but never to acceptance of her fate.
One of the most affecting moments is when “Danny” insists she can remember the name of her dog, then can’t, then tentatively calls for “Sparky,” with neither she nor we being sure that is really his name. The perfection of that horrifying moment sent a chill racing down my spine (there it is again just recollecting it). Frederica von Stade is still assuredly at the top of her game. 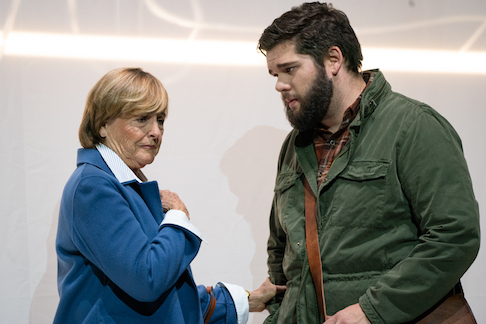 Danny (mezzo-soprano Frederica von Stade) and son Ira (tenor Daniel Taylor) realize she has Alzheimer’s [Photo by Steven Pisano]
As her contrasting acquaintance Martha, Marietta Simpson is her artistic equal, albeit with a very different assignment. “Martha” is already well down the path to dementia, not fighting it as hard since she doesn’t even quite know what the fight is. Consequently, much of her vocalizing is more incoherent, more diffuse, often evolving into stammered nonsense and non sequiturs.
I never heard this acclaimed artist live before, but it is my pleasure to encounter her even late in her career. She has incredible concentration and effortlessly meets all the demands of this difficult role. The substantial voice does have a slight huskiness, but it is a warm patina that serves the aging character well. Ms. Simpson is unstinting in her commitment to represent the warts of the character and the debilitating effects of the condition, succeeding in encompassing all the demands of wide-ranging vocal lines.
Singly or in tandem, the two ladies are giving true star performances, by turns heart wrenching and heart warming. It is subtly ironic that these two women need absolute presence of mind to portray two women who have lost theirs. Bravi!
As Martha’s resigned, if impatiently tolerant daughter, Sharleen Joynt’s pure, glinting soprano ably tossed off the angular writing assigned to her. As Danny’s sympathetic son, Daniel Taylor showed off a solid, ringing tenor that was rich and intense. The quartet of Elders (Veronica Chapman-Smith, Maren Montalbano, George Somerville, Frank Mitchell) were simply phenomenal in their concerted focus and execution. A Greek Chorus gone wrong, they prowled the stage like caged animals one moment and framed meaningful “still” stage pictures they next. They raged, they howled, they moaned, they stuttered, and they provided a disturbingly complex aural commentary and background for this tragic story.
In another irony for a piece where everything is unsettled, the accomplished director’s name is Joanna Settle. Ms. Settle has worked miracles with her gifted collaborators, creating an engrossing stage piece out of a horrible “accident” we can’t look away from. Her unerring skill at blocking is coupled with a total commitment to character explorations that are unnerving in their honesty and variation. By the end of the piece we know these people, and suffer with them. In a brilliant touch, the director deploys actual old supernumeraries in an unending single file parade upstage, visually underscoring that there is no end to this scourge that knows no demographic.
Andrew Lieberman contributed a spare, accomplished set design, a half a white “box” stage right and upstage, with two oversized door frames, with a wall of white gauzy drapes stage left. The set pieces consisted merely of a large heavy table and two white chairs that were moved about to suggest various locales. For effect, a pipe flew in with a stage-width tubular squiggle attached. The pipe adjusted to various heights, and the scribble changed color to reflect the emotional states of the characters. Spoiler alert: it finally crashes and short-circuits at a crucial moment. The only other set element was a mid-stage pipe that flew in, on which an 8 foot high scrim was able to be drawn to bisect the action.
Tilly Grimes has designed spot-on contemporary costumes that brilliantly represent the characters wearing them. Rarely has modern day stage dress been so unobtrusive yet so revelatory. Pat Collin’s magnificent lighting design is ably complemented by Daniel Perelstein’s subtle, effective projections. Together, the pair has crafted a tellingly subliminal suggestion of shifting moods and altered reality. David Zimmerman’s apt hair and make-up design was especially affective with the weathered look of the Elders.
Sky on Swings is an important, innovative new work mounted with such obvious skill and care that it emphatically embodies all that Opera Philadelphia is attempting to achieve with their bold festival concept. Its triumph sheds glory on all concerned.
James Sohre