… but more on that later.
I have to say Ms. Racette is giving a wholly committed, theatrically vivid, musically thrilling account as Elle in Francis Poulenc’s monodrama. The libretto is by Jean Cocteau, based on his own play. In the fifty-minute running time, Elle is having a last, difficult phone conversation with her former lover who is about to marry another woman. In an anguished attempt to stay the inevitable, the woman desperately processes the reality of her unrequited love.
There is no aspect of this complex “conversation” that eludes this fine performer. Her sudden shifts of temperament, her calculating tactics, her frightened outbursts as the phone disconnects, the occasional catch in the voice, her aching persistence, all combine to make as good a case for the somewhat repetitive script as possible. Moreover, Elle is a perfect vocal fit for Racette at this point in her illustrious career.
The conversational writing of the vast majority of the score is easily encompassed by her full-bodied soprano, the middle and lower registers “speaking” with a ripe presence, and the top congenially negotiated. In my recent encounters, her very top notes have sometimes been characterized by a more generous vibrato than in the past, but on this occasion the singing was wonderfully controlled in the upper reaches of Poulenc’s leaping phrases, and they were generously weighted with searing drama.
A take-no-prisoners performance of such accomplishment and artistry does not come along every day, and Patricia Racette’s traversal is a memorable marvel of this or any other festival. Her partner in music-making, pianist Christopher Allen proved a thrilling collaborator, finding orchestral colors in his virtuosic playing.
With the evening marketed as Ne quittez pas, this short piece was preceded by a noble attempt to fill out the program and create a “first act” based on Poulenc songs, piano works and a dash of Apollinaire, to “set up” the opera proper, and to provide a backstory for Elle’s predicament. What looked good on paper proved problematic in execution.
The premise is that it is past closing time at a nightclub-cum-cabaret, not unlike the Living Arts Theatre, the venue we are sitting in. A chain-smoking, brooding pianist (Mr. Allen) is being chided by the owner (Ames Adamson), who for some reason has a cockney accent, urging him to find new material for the house’s fading diva (presumably Elle whom we have yet to meet). The owner storms off and leaves the pianist to play some introspective Poulenc. And smoke. And smoke. And. Smoke. 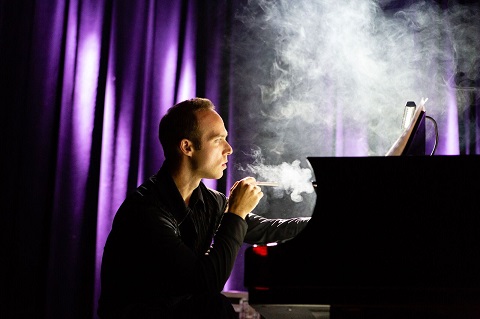 Christopher Allen. Photo Credit: Dominic M. Mercier.
There is a beating at the door that interrupts the pouty piano player. It is a hipster brother and sister team, Paul and Elizabeth/Lise, (Marc Bendavid and Mary Tuomanen ), hell-bent on upheaval and debauchery who have a handsome man (Le jeune homme) somewhat unwillingly in tow. They argue, they smash things, and the brother insists they play “The Game,” in which the young man must inexplicably do whatever bawdy act he is bid. None of these characters is likable, sympathetic, or appealing, although they are physically attractive. I looked at my watch. Twenty minutes have passed and not a note has been sung by anyone. Opera, anyone?
Finally, le jeune homme begins performing a series of rather randomly assembled Poulenc songs (they may have had an intended logic that eluded me). He started out performing intimate acts against his will, later giving in more eagerly to his fate. Edward Nelson performs his assignments with a most agreeable, burnished baritone, although a few of the uppermost notes were not without effort. Still, Mr. Nelson thereafter admirably performed an almost non-stop recital while being spun around, shoved, forced into various carnal positions, stripped to the waist, tied up, blindfolded, and man-(and woman-) handled. I sometimes wondered how he managed to sing at all, much less as mellifluously as he did. After sixty longish minutes, this “prequel” premise eventually limped to an end with a baffling lack of closure. The intermission chatter in my part of the house was marked by confusion, belying the clarity of set-up to which the venture aspired.
Not that there is not merit to be found in this concept. Director James Darrah is clearly talented. His varied and focused La voix humaine was a model of invention, unity of purpose, and honestly motivated emotions. In the first act however, Mr. Darrah seemed more intent on shocking than informing. That said, he used the space creatively, elicited brazen performances from the performers, got in our faces with fervent intent, and made undeniably bold choices. Too bad he didn’t also instill some heart and soul into the proceedings. The relentless abrasiveness was not helped by over amplifying the actors.
Tony Fanning is credited for the efficient, effective production design. Mr. Fanning has created sort of oversized triptych of mirrors on stage center, matching the red and pink hues of a mirrored faux bar house level right. The grand piano occupies stage right and an unused drum trap set stage left. Handsome long, red, tube shaped lamps hover somewhat portentously over the center stage action. The wide-ranging playing space extends to a semi-circular aisle running between the rear seats and the prime table seating. Actors even wind up in the actual, operational side bar and the balcony. This immersive use of the environment was a solid plus.
Pablo Santiago worked considerable magic with an eclectic lighting design, and he came up with some great solutions in defining the areas in a sprawling playing space, including judicious use of the house lights. His shifts of intensity and colors ably underscored the personal journey of the characters, most especially Elle. Chrisi Karvonides’ effectively shifted from tongue-in-cheek bohemian kink (Act One) to understated elegance for Elle in “La voix humaine.” David Zimmerman provided an effective hair and make-up design.
Why Elle has returned to this venue to make her phone call is not entirely clear. It was curious that the pianist entered after she did, and then pretended at first to be asleep on the piano. Did he miss his places call? In my memory, Elle did not refer to his obvious presence, although Act One clearly seemed to establish him as a character with a relationship to her.
Was the baritone meant to be her former lover on the phone? I guess. Was the sister meant to be his bride? How did his homosexual attraction to the brother figure in? Ah well, better to not keep looking for answers and revel instead in Patricia’s glorious star turn, reason enough for rejoicing.
In the end, however well-intended, Ne quittez pas, for all its admirable professionalism, left me wanting less.
James Sohre
Ne Quittez Pas: A Reimagined La voix humaine
Music by Francis Poulenc
Libretto by Jean Cocteau (based on his play)
Additional songs and music by Francis Poulenc
Elle: Patricia Racette; Le jeune home: Edward Nelson; Paul: Marc Bendavid; Elizabeth/Lise; Mary Tuomanen; The owner: Ames Adamson; Pianist: Christopher Allen; Director: James Darrah; Production Design: Tony Fanning; Costume Design: Chrisi Karvonides; Lighting Design: Pablo Santiago; Wig and Make-up Design: David Zimmerman.