Donizetti traversed these sordid histories in 8 years (from 1830-1838). It took San Francisco Opera 13 years (Joan Sutherland as Maria Stuarda in 1971, Monserrat CaballÈ as Elizabeth I in 1978, and Joan Sutherland as Anna Bolena in 1984). Of course a couple of years ago the mighty Met managed to mount the whole bloody history in a few mere months.
This is opera history and Donizetti’s queens are opera history, rather history according to opera. There is no question which history is more real and true — crumbling parchment documents and a few words etched in stone from long ago or the delicate intimacies and huge tantrums that flew off the War Memorial stage last night at the final (of six) performances of Roberto Devereux. Donizetti’s bel canto miraculously achieved the Apollonian ideal — raw emotion absorbed into high art.
Soprano Sondra Radvanovsky portrayed history’s most terrifying queen in terrifying intricacies of voice, high d’s surreally emerging from nowhere to cap thrilling ascents of tortured lines, then other moments of descending lines, stepwise and sorrowfully slow. La Radvanovsky’s Elizabeth is terrifying, a persona of monumental presence, of absolute authority terrorised by love, a persona that is fully aware of her regal power, exuding the pleasure of executing astonishingly difficult vocalism, and surely of holding the 3000 spectators in the War Memorial in her thrall.
And a persona willing to fully suffer the torment of losing those she most loves, Roberto Devereux whom she blindly loves and the woman Devereux loves, her confident Sara. 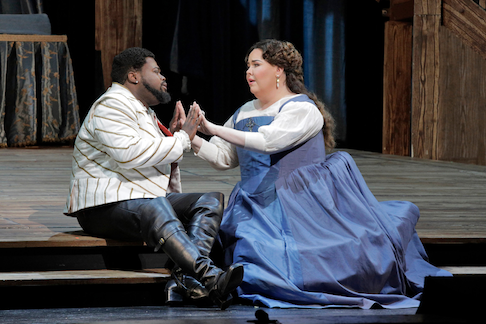 Russell Thomas as Devereux, Jamie Barton as Sara
Elizabeth is hardly the only one to suffer. Sara’s husband, the Duke of Nottingham is Devereux’s best friend who must reconcile his love for and trust of his wife with his love and respect for his friend. Sara must reconcile her love for the queen with being her rival for Devereux’s love, and Devereux must reconcile his political and blatant personal betrayals of absolutely everyone with himself. So there is a lot to sing about.
And sing and suffer they do. After three hours of trying no one reconciled much of anything, to our very great pleasure. It was indeed an evening of bel canto! Italian conductor Riccardo Frizza established an unwavering dramatic pace that drove the betrayals and at the same time offered the protagonists all freedom to expand each moment of elation or despair and all gradations of joy and suffering in between. It was an all-too-rare conductorial achievement in parsing the emotional machinations of this difficult repertoire.
The voices of the protagonists were carefully matched. The all American cast was in prime vocal condition, and musical preparation was stylistically consistent. All voices were indeed beautiful, befitting the essence of bel canto. If the Radvanovsky sound is magisterial, mezzo-soprano Jamie Barton as Sara added the freshness of voice of a young woman in love. Tenor Russel Thomas as Roberto Devereux produces a limpid yet lush tenor sound throughout his full register, including its stratospheric tenorino reaches. In such company Adler Fellow Andrew Manea as the Duke of Nottingham strangely was not over parted. If his youth was obvious, his authority of presence, his command of style and use of his quite beautiful voice were formidable. 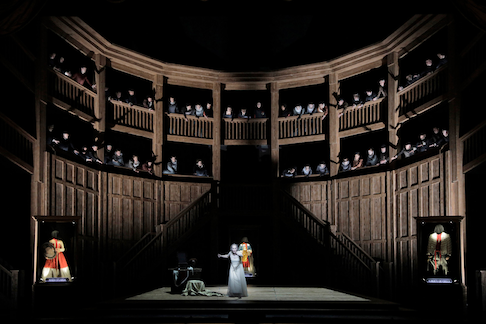 Sondra Radvanovsky as Elisabetta in final scene
The well traveled production by British director Stephen Lawless belongs to Canadian Opera. Mr. Lawless took his cue from Donizetti’s quote of “God Save the Queen” in the overture to attempt to create levity, if not caricature of opera history. The surround was the galleries an Elizabethan theater indicating, I suppose, that we need not assume what we saw happen on the center stage acting platform was true or real, that it was, after all, only opera. There was a multitude of cute staging tricks that tried to keep us distanced from the distraught, often overwrought protagonists. They did not. We suffered.
That the production is not distinguished was of little importance to this evening. Mme. Radvanovsky grounded the production in high bel canto style that easily overcame all directorial conceits. This unique artist had the support of a well qualified cast. With Maestro Frizza we, right along with this distinguished cast, enjoyed a splendid evening of opera history.
Michael Milenski