And, the front-drop of Stephen Unwin’s production for British Youth Opera
at the Peacock Theatre presented a fitting painterly swipe of reckless
colour and some watery splashes, reminding us, in-between scenes, of the
opera’s origins and of the virtuosic artifice of the composer’s and the
poet’s remodelling of the past.

James Cotterill’s designs transported Tom Rakewell’s moral and material
descent to the mid-twentieth century, the creators’ present, though I
sensed at times a whiff of late-nineteenth century hypocrisy and degeneracy
– the devil-may-care self-destructiveness of Wilde’s Dorian Gray or
Stevenson’s Dr Jekyll, say.

This was a slow-burn production which on the opening night started with
unfussy restraint but upped the emotional tempo towards the final scenes
and closed with a touching picture of utter and irredeemable wretchedness.
In fact, it all seemed a bit too discreet and decorous initially, and
conductor Lionel Friend’s ponderous tempi didn’t help, though the Southbank
Sinfonia’s orchestral textures were always lucid – the players seemed more
comfortable in this idiom than they had been a few nights previous, in
Jeremy Sams’ baroque pasticcio, The Enchanted Island – and Sam
Jury’s fortepiano continuo was crisp and characterful. 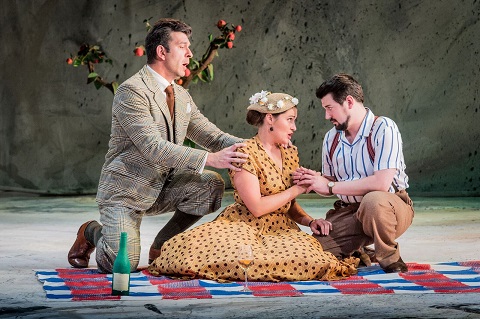 The dingy grey curtain which formed the bedraggled backdrop for the dreamy,
innocent domesticity of the opening scene – Trulove’s garden being
indicated by a few stray pot plants – made for a rather shabby utopian
idyll, but the simplicity of design subsequently proved an asset in telling
a complicated tale. Splashes of colour – crimson red for Mother Goose’s
brothel, hubristic purple of Sellem’s auction – and the modulation of Mark
Jonathan’s lighting from the bright light of day to the darkness of
graveyard despair, and finally to washed-out pallor amid the shadowy
horrors of Bedlam, did good service to the plot.

This was a Progress, though, that was rather perversity-lite. The
lip-shaped velvet sofa in the Brothel did not seem likely to swallow up
Tom, sucking him into debauchery, and while the array of artefacts with
which Tom adorns his house effectively trod the fine line between eclectic
eccentricity and trashy tastelessness, the leopard-spotting statuettes and
“fantastic baroque machine”, which Shadow professes can turn stone to
bread, lacked that touch of truly bizarre extravagance. 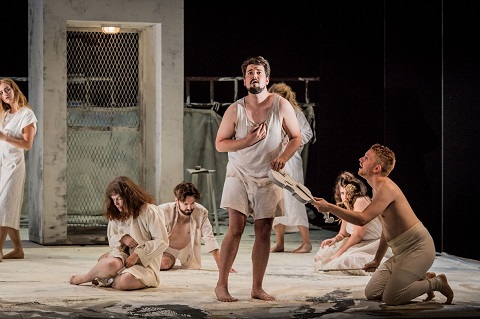 The singing was top-notch, however. I admired Samantha Clarke’s Elvira in
last year’s BYO production of Don Giovanni, and she brought a
similar stylishness and beguiling lyricism to her portrait of the
long-suffering Anne Trulove. She was well-matched by Frederick Jones’s
Rake, who retained just enough hint of ‘boy-next-door’ goodness and
gullibility for his decline and ultimate demise to touch our hearts. Tom’s
reflections on his love for Anne and his fears for the future bloomed
warmly and the challenges of the complex vocal lines proved no problem for
the tenor.

Jessica Ouston put in a star turn as Baba the Turk showing a discerning
sense of well-placed dramatic details – the knowing twiddling of Baba’s
laced-gloved thumbs as she waited in a man-drawn hackney for Tom’s
inevitable capitulation was a deliciously cruel comic touch – and using her
juicily plump mezzo to make the fairground celebrity much more than just a
dramatic device. 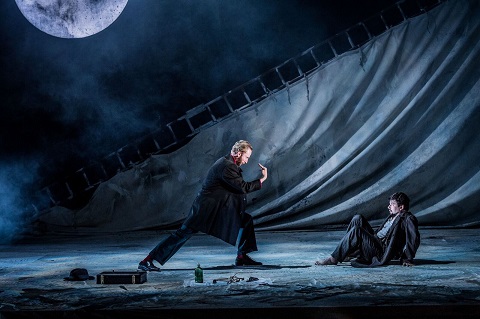 Both Iain Henderson’s Sellem and Emma Lewis’s Mother Goose might have been
more outrÈ, but the roles were confidently sung. Sam Carl’s Nick Shadow,
too, displayed surprisingly understated Machiavellianism, but the seductive
softness of Carl’s bass-baritone – which I enjoyed earlier this year at the


– made it easy to see why Tom was duped by Shadow’s propositions and
promises, and Carl’s switch from friend to foe was sly and disturbing.
Pedro Ometto (Trulove) and Thomas Mole (Keeper of the Madhouse) completed a
fine cast and the BYO Chorus were in roaring voice.

There was one area of ‘weakness’ though, as there had been in An Enchanted Island. The singers’ diction lacked clarity. And,
Auden’s words do deserve to be heard. By coincidence, the preceding evening
had found me at Wilton’s Music Hall for


– Auden’s first essay at libretto writing. Interestingly, in an undated
draft memoir about his collaborations with Benjamin Britten, the poet
re?ected: ‘It was during this period [1939-40] that Britten wrote his ?rst
opera, and I my ?rst libretto, on the subject of an American Folk hero –
Paul Bunyan. The result, I’m sorry to say was a failure, for which I am
entirely to blame, since, at the time, I knew nothing whatever about opera
or what is required of a librettist. In consequence some very lovely music
of Britten’s went down the drain.’ Auden is perhaps somewhat too harsh on
himself; there were various reasons for the operetta’s poor reception. But,
certainly, his libretto for The Rake’s Progress demonstrates his
mastery of the craft. The Peacock Theatre is not fitted with surtitle
screens, so the singers had even more responsibility to ensure that we
could appreciate the virtuosic pastiche of Auden’s literary melange, which
equals Stravinsky’s musical parodies for stylistic bravura.

Despite this, the pathos of Tom’s grim fate certainly made its mark and
when the cast broke the fourth wall, their moralising summation, that the
Devil makes work for idle hands, effectively drummed home a lesson that had
been deftly and directly delivered.