A chamber opera lasting 75 minutes, The Second Violinist is
Dennehy and Walsh’s second operatic collaboration. The first, The Last Hotel, was driven by an ominous meeting and the shadow of
death and these elements seem to be becoming trademarks: The Second Violinist lays bare Martin’s suffering soul, loneliness
and introspective journeys into surreal and violent worlds, but leaves
identity and narrative shrouded in mystery. The opera was first presented
by Landmark Productions and Irish National Opera at the Galway
International Arts Festival on 27th July 2017 and now the
production, which won the Fedora Generali prize for opera and the
Best Opera award at the Irish Times Theatre Awards, has travelled to London
where the UK premiere opened the new Barbican Centre season this week.

Designer Jamie Varton’s set is dominated by an imposing cinematic interface
which stretches across the central section of the wide Barbican Theatre
stage. A prefatory statement sets the tone: “Beauty, since you are leaving,
as you take my heart, take its suffering too.” As the drama unfolds, the
screen flashes hyperactively with the images which storm Martin’s tensely
clutched smartphone – thumped-out text messages, pizza delivery promotions,
dating agency updates and the like, alongside the insta-snaps taken by
Martin – literally a mute musician (Aaron Monaghan takes the silent role),
and fictionally a violinist disenchanted with his vocation (and with his
instrument if the way he bashes his fiddle about is anything to judge by) –
which document his daily travels, routines and miseries.

On Tinder Martin lists his interests as Gesualdo, Masterchef and Ireland Birdwatch – swallows, and their freedom, become a
recurring visual and psychological motif – but this cine-world also reveals
his obsessions. And, they err on the violent side: Japanese samurai
video-game slaughter, safari slayings in which lionesses sink their teeth
tenaciously into wildebeests’ necks, and Carlo Gesualdo, that murderous
melancholic madrigalist and madman, who, with impunity, killed his wife –
Maria D’Avalos, daughter of the Prince of Montesarchio – when he learned of
her sexual betrayal. As Martin’s texts unfold before us, video designer
Jack Phelan plays a slick trick by back-tracking when Martin describes his
occupation as “violen-”, rapidly substituting “violinist”.

The fourteen-strong Crash Ensemble, dynamically conducted by Ryan
McAdams, are placed in a sunken orchestral pit, out of which
the eponymous protagonist climbs onto a stage which presents a medley of
the domestic and the potentially dangerous. Stage-right a lavatory and
working shower are apportioned; mid-stage rests a crumpled bed; stage-left
houses a kitchen with a large refrigerator from which dangles a miniature violin. In the centre of all is a turning treadmill, suggestive of the
passing of time but also – when Martin mounts it, his stare unflinching,
slightly unhinged – of his controlling fixations. Up above, accessed by a
trapdoor ladder, grows a grim, Brothers Grimm-style forest: a leaf-less,
post-apocalypse landscape.

These are evocative and suggestive visual images, but there is simply too
much paraphernalia, too widely dispersed. At least when one is watching a
tennis match, one’s swinging gaze is following the ball, but here it was
impossible to find a focus or keep track of what was going on in the visual
margins – and what made it more frustrating was that quick glances left to
right and back again suggested that that usually that wasn’t much of
import: the pouring of a glass of wine, the sending of a text message. 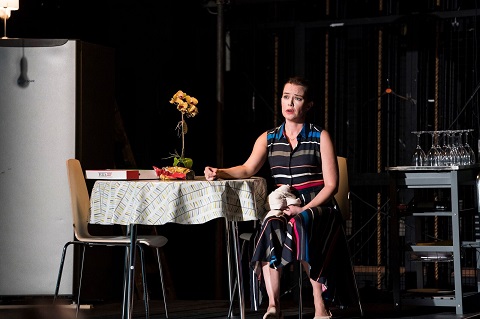 Walsh’s characters are desperately in need of Forster’s psychological
wisdom, ‘only connect’. A recent romantic rift has left Martin heartbroken
and emotionally scarred. At first he tells his Tinder correspondent,
Scarlett, that he is a “Violinist in a musical ensemble!” but as his hope
of potential romance grows he indulges in grandiose wish-fulfilment: he is
actually a “Composer of operas”. His favourite Gesualdo madrigal is ‘Gi‡
piansi nel dolore’, with its uplifting sentiments, “Once I wept with
sorrow, now my heart rejoices, because my lover has said: ‘I too burn for
you.’” But, reality bites, and Martin’s identity sinks to simply “Living”
and “Alone”.

Amy (Sharon Carty) and Matthew (Benedict Nelson) are in the throes of
matrimonial disintegration. Obsession once again rears its ugly head: Amy’s
enthusiasm for interior re-decoration is becoming a pathological
compulsion. At least the walls are light grey, not dark, for this would be
like living in a graveyard, quips Matthew. The characters have an alarming
propensity to furtively flourish knives, and the arrival of Hannah, Amy’s
old college friend, Hannah (M·ire Flavin), sharpens the blade-point
further.

As passions are remembered and re-ignited, rivalries and conflicts
escalate. Not surprisingly violence erupts, and it’s the two women –
themselves former lovers, perhaps? – who bear the brunt. But, is the
perpetrator Martin, or Michael? The hands of both drip with viscous blood
and Martin’s excoriating scrubbing in the shower surely leaves few layers
of his skin intact. Are Martin and Matthew the same person? Have we
travelled back in time to the moment of Martin’s abandonment? 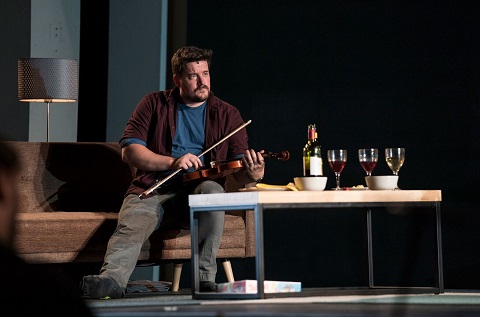 The Second Violinist
poses potentially intriguing questions and the melange of media
could be dynamic. But I wasn’t convinced that Dennehy and Walsh have really
made voice, music, word, design, image and movement combine and cohere, in
such a way that each element in the hybrid form plays its part in the
relation of narrative, emotion and meaning. There’s not actually much
singing in The Second Violinist: the titular character is silent
and, a quasi-film score, the music more frequently seems simply to
illustrate images – the stabbing underpinning of punched out chat-room
chat-ups, for example – rather than to forward the emotional and narrative
trajectory. The characters’ stage movements often feel directionless; it’s
not clear, for example, what purpose is served when the sixteen singers of
the chorus move, half-way through, from one side of the stage to the other.
Walsh’s text is rather banal: perhaps that’s the point – that the tragedy is the banality?

While Dennehy’s score does incorporate some tensely frenetic music –
particularly for the strings – as well as quieter reflections, it is the
madrigal-esque choral commentaries that are the musical highpoint, though
these choric interjections are not assimilated into a musico-dramatic
continuum. The chromatic contortions and disconcerting lurches between
distantly related harmonies encapsulate both the characters’ pained
alienation and the drama’s unstable psychological ambiguities – though
repetition of the devise brought the sense that my sentiments were being
manipulated: dissonance and disjuncture seem somewhat facile intimations of
dysfunctional psychopathy.

The solo roles were performed with uniformly intense commitment and focus,
but there is little differentiation of character in Dennehy’s vocal
writing. Both Carty and Flavin crafted their melodic lines with clarity and
focused tone, but their diction was weak. Nelson projected strongly, but
the presence that the singer brings to the stage felt under-used and the
characterisation of Matthew under-developed. And, despite the tension
generated by the unanswered questions, there was a countering static
quality. Every fibre of Aaron Monaghan’s face and fibre screamed with
Martin’s pain but given that’s how he starts there’s not really anywhere to
go.

If you like Gone Girl and The Girl on the Train then you’ll probably love The Second Violinist – certainly
the Barbican Theatre audience were enthusiastic in their reception. When
Scarlett (Kimani Arthur) eventually meets Martin, we fear it’s not so much
for a casual stroll in the countryside as for a risky venture ‘Into the
Woods’, with Bluebeard as an escort. Gesualdo got away with murdering his
wife in flagrante. Will Martin/Matthew? The trouble is, I’m not sure that I
really cared.