Cambridge, MA – The GRAMMY Award-winning Boston Early Music
Festival Chamber Opera Series returns on Thanksgiving weekend with an
all-new production of the first opera by a woman composer, Francesca
Caccini’s Alcina. Alcina is a brilliant entertainment,
full of wit, magic, and drama, with a demanding title role first sung
by the composer herself. The production will receive four performances:
Saturday, November 24 and Sunday, November 25 in Boston, and Monday,
November 26 and Tuesday, November 27 in New York City.

“Women have been shaping the world of opera from the very
beginning, and we at BEMF are excited to present a new production of
the first opera by a female composer, Francesca Caccini’s 1625 La liberazione di Ruggiero dall’isola d’Alcina
,” offers Executive Director Kathleen Fay. “As more and
more women are finding their voice in opera, whether as artists,
producers, patrons, or composers, it is exciting to be reminded that
this is not a new phenomenon. We have been here for nearly 400 years
already, and we are only getting started!” 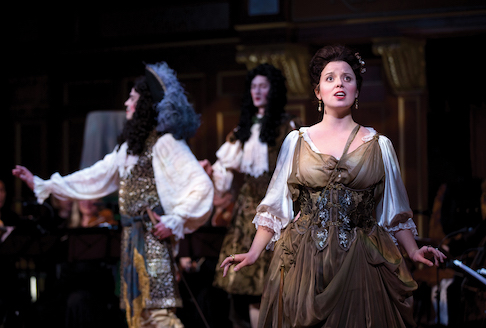 A contemporary of Monteverdi and a colleague of Galileo, Francesca
Caccini came of age in Florence during the earliest years of opera as
an art form. Both a composer and a performer, she was one of the most
important musical figures at the Medici court during the regency of
Christina of Lorraine and Maria Maddalena. In 1625, amid this time of
female leadership, she created Alcina, the first opera by a
woman composer and among the first Italian operas performed outside of
Italy. Adapted from Ludovico Ariosto’s 16th-century
epic poem Orlando furioso, the sorceress Alcina stands at the
center of a struggle between illusion and destiny as the valiant
Melissa strives to save the warrior Ruggiero and liberate the captives
Alcina has transformed into plants and trees to ornament her island.

ABOUT THE BEMF CHAMBER OPERA SERIES:

ABOUT THE MORGAN LIBRARY & MUSEUM:

The Morgan Library & Museum began as the private library of financier
Pierpont Morgan, one of the preeminent collectors and cultural benefactors
in the United States. Today, more than a century after its founding, the
Morgan serves as a museum, independent research library, musical venue,
architectural landmark, and historical site. Located at Madison Avenue and
36th Street, its collection includes world-renowned collections
of drawings, literary and historical manuscripts, musical scores, medieval
and Renaissance manuscripts, printed books, photography, and ancient near
Eastern seals and tablets. Gilder Lehrman Hall, designed by renowned
architect Renzo Piano, was opened by the Morgan in May 2006, and seats 264
people, providing a uniquely intimate concert venue. This marks the Boston
Early Music Festival’s 13th season of concerts at the
Morgan Library & Museum.

ABOUT THE BOSTON EARLY MUSIC FESTIVAL:

The 2018-2019 Boston Early Music Festival Concert Series is presented with
support from the Massachusetts Cultural Council, National Endowment for the
Arts, WGBH Radio Boston, and Harpsichord Clearing House, as well as a
number of generous foundations and individuals from around the world.

For more information, images, press tickets, or to schedule an interview,
please contact Kathleen Fay at 617-661-1812 or email kathy@bemf.org.