Historic conflicts and losses loom in the form of sepia ancestral portraits
which glare impenetrably and accusingly from the crumbling walls of
Ravenswood Castle, complemented by the prurient faces of the hypocritical
observers who peer through the gaping windows at the familial abuse within.
Lucia, too, is trapped in the past of her own childhood: a fragile,
whimsical doll-woman, she is infantilised by her incestuous and paederastic
brother, Enrico, while her own retreats into juvenile fantasy and memory
cannot save her from the sadistic, even psychotic, adults who manipulate
and manhandle her. 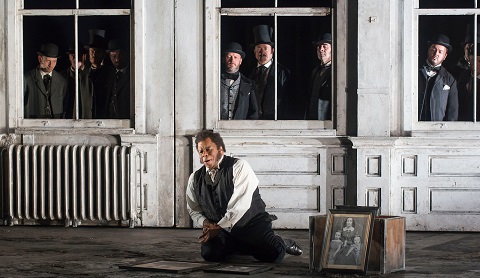 Alden has moved the action to the mid-nineteenth century, and designer
Charles Edwards’ dilapidated mansion resembles a decaying boarding school
worthy of the bleakest Victorian novel: dark, damp and decrepit, with Lucia
the lone sleeper in the chilly dormitory at the start of Act 1. Indeed, the
opening image brought Jane Eyre’s experiences at Lowood School to mind –
Enrico would certainly give Mr Brocklehurst a run for his money in the
cruelty stakes – and this wasn’t the only literary comparison that seemed
pertinent during the performance. This Lucia is an ‘inmate’, imprisoned in
a mental asylum, and the insane are her jailors. When Enrico ties her to
her bed with a skipping rope in their Act 2 confrontation, I was put in
mind of the “atrocious” former nursery at the top of the house, with its
barred windows, nailed down bedstead, iron rings in the walls, and peeling
wallpaper – “repellant, almost revolting; a smouldering, unclean yellow” –
in which the narrator of Charlotte Perkins Gilman’s The Yellow Wallpaper finds herself similarly imprisoned by her
oppressive husband. 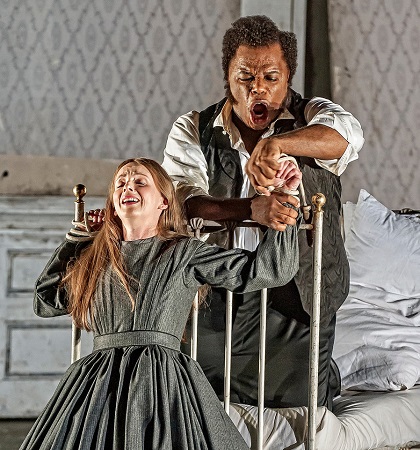 When Lucia, teetering on the edge of mental crisis from the first, succumbs
absolutely to insanity, her mad display seems to provide the observing
crowd with delectation and delight. Her bloody self-destruction doesn’t
seem so much an ‘escape’ through a madness that evades the understanding
and structures of her oppressors, but more a submission to an unavoidable
destiny. Dressed like a doll, she resembles Carroll’s Alice – an image
strengthened when Arturo arrives, posing elegantly in a pristine suit, and
looking rather like the White Rabbit. But, her only comfort, a fluffy toy,
is brutally torn apart by her brother; and, unlike Alice, Lucia will find
no wonderland through Ravenswood’s looking-glasses or wardrobes – just
fusty piles of ancestral documents. This child-woman has been assaulted by
Enrico, manipulated by Raimondo, rejected by the deceived Edgardo, defiled
by Arturo (one presumes); the last drop of her innocence is destroyed when
she is forced to watch Edgardo’s demise.

Alden sustains the trope of the gaze which objectifies – Lucia is after all
the ultimate commodity, her body the material means by which Enrico will
pay off the family debts, her sacrifice designed to ensure the survival of
the house and family name – through imagery of the theatre and performance.
We first see Lucia seated at the foot of a curtained proscenium and, when
the curtain is drawn back, her confrontations – romantic and deadly – will
take place upon its stage. At the close, the theatre swivels and we are
taken behind the scenes, unavoidably complicit in the gaze of the male
chorus who sit in the on-stage audience ranks, alongside the dead Lucia,
surrounded by the framed photographs which have now become gravestones. 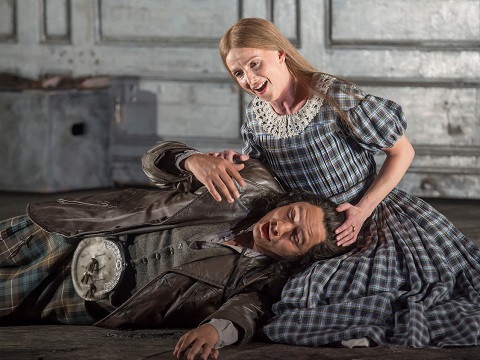 The ENO Chorus were in splendid voice, and Alden’s blocking (revival
movement director, Maxine Braham) emphasised the rigidity of the social
manacles which enchain Lucia. Lined up in dour grey, with sour scowls,
their condemnatory weight was crushing. It was hard though to imagine such
a joyless crowd engaging in revelry after the wedding of Lucia and Arturo,
and, indeed, Alden and lighting designer Adam Silverman (revival lighting
director, Andrew Cutbush) keep the party shrouded in shadows which means
that Raimondo’s arrival with the news of Arturo’s death and Lucia’s demise
doesn’t make such a strong dramatic impact as it would were the
entertainments colourfully contrasted with the behind-scenes tragedy.

American tenor Lester Lynch was an imposing Enrico: self-righteous,
solipsistic and frighteningly sadistic – a huge presence and a resounding
voice, with clear diction. Lynch and Clive Bayley’s malicious, manipulative
Raimondo were a deeply disturbing double-act, Bayley emphasising the
cruelty of the pastor through his aggressive demeanour and thunderous
delivery. 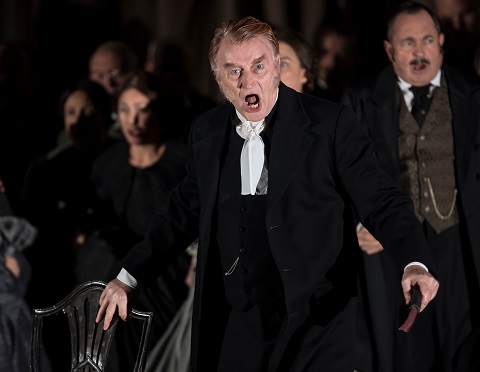 I found Eleazar RodrÌguez’s heroic assaults on Edgardo’s soaring phrases in
Act 1 a little too hefty, but he found a true bel canto flexibility
subsequently, making a gleaming contribution to the Sextet, and
convincingly conveying Edgardo’s anger and hurt in the face of Lucia’s
supposed betrayal. Michael Colvin’s lighter tenor offered a pleasing
contrast, and he displayed lovely colour and vocal grace as Arturo. The
role was a better fit for Colvin than his recent essay as Herod in Adena
Jacobs’


and it felt a pity that Alden doesn’t foreground Arturo more. Alisa is also
often pushed into the shadows, though Sarah Pring gave a fine performance,
vocally and dramatically; to extend the Jane Eyre parallel, she
reminded me of Grace Poole, a figure of mystery residing in the half-light
and hinterland. 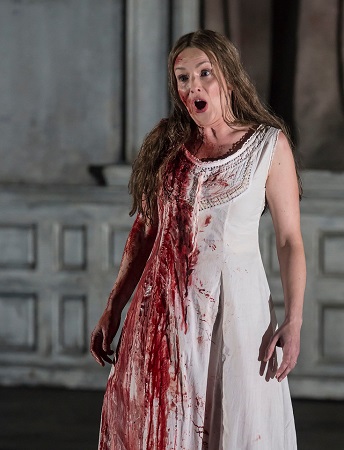 Sarah Tynan, making her role debut in the title role, was in a class of her
own. Her light soprano conjured a delicate Lucia, fey and vulnerable; her
voice stayed relaxed even as it climbed and her coloratura – she omitted
the cadenza in the mad scene – was not decorative but truly expressive of
Lucia’s battered and suffering soul – beautifully phrased, controlled,
spacious, the dreamy wistfulness enhanced by the glass harmonica.

Conductor Stuart Stratford led a superb performance by the ENO Orchestra:
stark swipes of instrumental colour never over-powered the singers, the
pace was dramatic but not precipitous, the tension sustained.

was ENO’s first staging of Lucia di Lammermoor. It was, and is, a
terrific addition to the company’s repertoire, especially when in the hands
of such a splendid team of singers and musicians.