his plan – initially proposed by AAM director Richard Egarr – to precede
the presentation of Purcell’s Dido and Aeneas with the staging of
Dido’s funeral, accompanied by a selection of the composer’s instrumental
and vocal music, so it was no surprise when the black figures of the AAM
Chorus processed soberly onto the platform and, observing courtly protocol,
heralded the ritual with unison drum-thumps of almost violent portent. The
careful peeling back of the delicate shroud revealed a fragile white form –
a vulnerable, delicate, ethereal figure, seemingly far removed from the
tragic queen of history and myth. 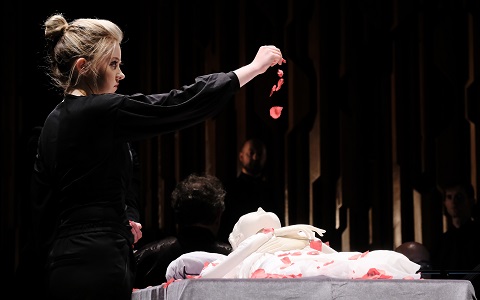 Perhaps this was Guthrie’s ‘point’: “Remember me,” she urges, but who is
‘me’? Who was/is Dido: a tragic victim of Fate destroyed by imperial
destiny, or a real flesh-and-blood woman betrayed and abandoned by a lover
for whom god-ordained purpose outweighs private passions? Moreover, how should we ‘remember’? Should we lament, pity and commemorate,
sustaining a memory of the dead in the land of the living, as the final
chorus of the opera counsels and as the AAM Chorus here observed: ‘Soft and
gentle as her heart, / Keep here your watch and never part’? Or does Dido
advocate not merely pity, but vengeance?

Certainly, as Rowan Pierce’s Belinda and Ashley Riches’s Aeneas stood
beside the wraith-like effigy there was a palpable anger to their grief,
and a sense of imminent confrontation and conflict. This strength of
feeling was, however, strangely at odds with the intimate gentility of the
musical discourse. Leader Bojan ?i?i?, violinist Rebecca Livermore and viola
da gamba player Imogen Seth-Smith played the first three movements of
Purcell’s Sonata in G minor with immensely touching refinement, but the
intimate quietude transported us to the realms to which Dido had departed,
distancing us from the more visceral emotions of those present at her
funeral. The Barbican Hall seemed too large and ‘open’ a venue for such
private concerns.

Pierce sang ‘So when the glittering Queen of Night’, from Orpheus Britannicus, from the shadows and with moving clarity and
sensitivity, accompanied by theorbo and plaintive strings, but from my
front stalls seat I wondered whether her tender pianissimo carried to the uppermost tiers of the Barbican Hall.
There was more animation in the Chacony in G minor Z730, during which
Riches prowled and scowled; the Pavan in G Minor (in which ?i?i? and
Seth-Smith were joined by Persephone Gibbs) offered delicate though
somewhat distanced musing.

The most direct impact was made by the AAM Choir whose voices, in ‘No stars
again shall hurt you form above’ from The Tempest, circled the
instrumentalists, blending with unaffected sweetness. A cushion of softly
brushed theorbo strumming accompanied Pierce and Riches in ‘Close thine
eyes and sleep secure’, inviting us into the intimacy of grief: their
declaration that “The music and the mirth of kings/ Are out of tune unless
she sings” rang with painful truth. The rites were brought to a close with
Purcell’s Chacony in G minor Z807, conducted by Egarr with inspiring energy
and with, literally, his whole being. After the anguish of so much
unalleviated G minor, the final tierce de Picardie was something
of a relief. 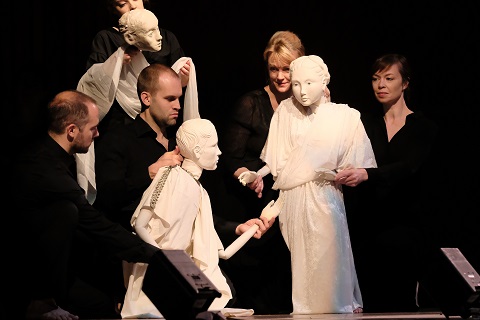 And, so, in the second half of the concert we looked back to the events
which had resulted in such doleful rites and woe. There has been
considerable debate over the ‘politics’ of Dido and Aeneas: the
nature and degree of the opera’s engagement with the troubling years of the
Stuart monarchy, as well as still unresolved problems relating to the
dating and chronology of performances and sources. But, Guthrie, despite
declaring his belief that Dido is “clearly related in the 17th
-century mind to Elizabeth I (‘Elissa dies tonight’)”, seemed here to
eschew a search for a topical allegory in his filtering of the very human,
and diverse, emotions of the opera through puppets – avatars which rather
restricted the range of the drama’s passions and abstracted them from any
specific or inferred context. 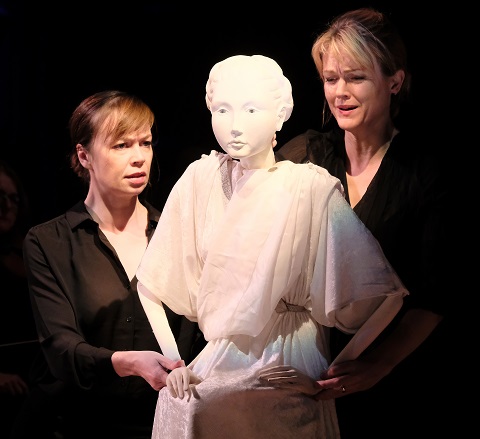 I worried whether the fragile, translucent puppet-Dido – touchingly slight
and subtle – could actually bear the tragic weight of the Queen’s Fate.
Though expertly manipulated by soprano Caitlin Hulcup and puppeteer Laura
Caldow, in the final reckoning I felt that ‘she’ could not. However, that’s
not to say that the tiny quiver of jaw, delicately pained expression and
poignant hinterland gaze of this Other-monarch were not affecting. And, if
there was a restriction of expressive range and a sense of emotional
secrecy, then this was perhaps apt. For the Queen of Carthage remains a
mystery to us: her public destiny seems to conflict with her private
feelings, the latter remaining elusive and incompletely understood – as she
tells Belinda, her grief ‘admits of no revealing’.

But, where was the anger that the queen hurls at her betrayer, the anguish
of confession publicly displayed in the lamentation with which she submits
to the darkness and death that shade and invade her? Purcell draws us into
his characters’ self-doubts and divisions, but this Dido-puppet retained an
air of formality and detachment, her inner life hidden from public view.
However, Caitlin Hulcup’s smooth, plush mezzo did communicate the queen’s
struggles, conflicts and uncertainties. Dido’s dying lament tugged against
the unrelenting ground bass, and at our heart-strings, shining with a
velvety richness that seemed at odds with the insubstantial, brittle figure
so carefully lain upon the earth by Hulcup and Caldow. 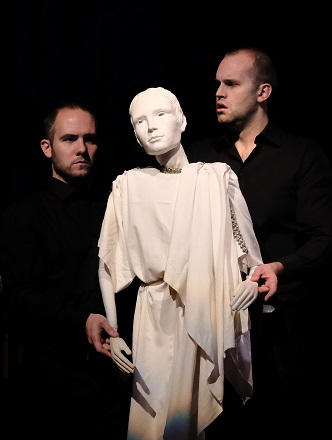 Like Hulcup, Ashley Riches was assisted by a puppeteer, Ben Thompson,
though both singers showed astonishing adeptness in manipulating their
self-representing avatars all the while singing with focus, sensitivity and
character. Riches brought a lovely tenderness to Aeneas’s pleas and
avowals, which complemented the gentle lowering of the puppet’s gaze and
cautious reaching out of its slender arms, though it was hard to imagine
this Aeneas as an authoritative warrior-leader torn from his queen by the
fulfilment of his Roman destiny. It was also difficult to imagine or sense
any ‘real’ attraction between the two lovers, though William Carter and
Eligio Luis Quinteiro did their best to conjure passionate frissons with
the vibrant jubilations of their baroque guitars as the queen and her
suitor departed for their tryst in the cave.

Rowan Pierce was superb as Belinda, conveying the lady-in-waiting’s
vivacity, directness and integrity through both her dramatically sensitive
phrasing and the way in which she bestowed her puppet-mask with a freedom
of movement. As the Second Woman, soprano Charmian Bedford communicated a
corresponding spiritedness. Blackly draped and illuminated with a piercing
blue hue, Neal Davies was a vivid and surprisingly earthy Sorceress, while counter-tenor James Hall posed as the false Mercury, issuing his divine command from behind a mask, in the rear doorway of the platform. 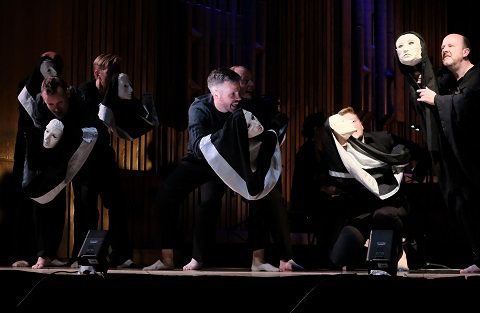 While Michael Casey’s pointed lighting brought the subtleties of the
solo-puppet’s visages to the fore, the Chorus, their masks trailing sinuous
scarves, sometimes slipped into the shadows as they moved around, behind
and through the instrumentalists, the puppets losing definition amid the
swirling trains. Interestingly, only when the chorus abandoned their masks
for a rip-roaring, hop-skipping sailor’s jig did one feel the full
directness and life-spirit of Purcell’s music, though, even here Guthrie
and designer Ruth Paton denied us any visual colour.

That said, some of the best singing of the night came from the AMM Choir.
Indeed, if we remained distanced from the blanched puppet-protagonists,
then this placed the glories of the music itself centre-stage. Egarr led
his musicians with dynamic gusto, leaping to his feet to whip up
instrumental rejoicing and tempests, moving to the front to join the
Witches’ Chorus in their gleeful revelling, “Destruction’s our delight”,
shaping the tempos and phrasing with natural ease and control.

The drooping phrases of the final chorus unfolded in a seemingly unceasing
cycle, making public Dido’s inner life in a perpetual appeal to the Cupid’s
to “scatter roses on her tomb”, a petition which, like our remembrance,
would and will never cease.