Whether by design or accident the pairing of British conductor Leo Hussain with American stage director Shawna Lucey resulted in a synergy of theatrical perspective and musical vision that rarely occurs. Conductor Hussain comes from new music, thus he hears this oft repeated score with new ears, sensing and amplifying subtle atmospheres, stabbing with sudden emphasis an orchestral color that embody a word or phrase uttered the stage, carefully erecting the intimacies of the arias and ariosos, pacing the confrontations with unhurried deliberation, settling on sonic brutality with with cold force. Musically this Tosca was conducted as a new-music score to be laid out in detail, take it or leave it.
Stage director Lucy was in complete sympathy, laying out a detail of staging to embody every action of the libretto in minute precision, then embellishing the libretto and music with additional narrative detail to create a seemingly impromptu context for the action and to make the surroundings seem like a everyday spaces where shit probably does sometimes happen. The richness of narrative context for this Puccini score was of a nineteenth century novel, certainly of a twentieth century romance, and most of all a twenty-first century made-for-television movie. 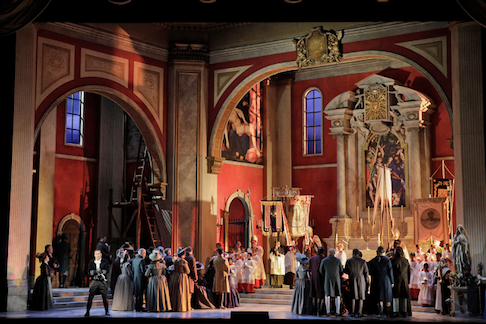 The Te Deum
British designer Robert Innes Hopkins obliged with a first act set that cannily caught the details of the austere spaces and the coldness of Rome’s St. Andrea della Valle (in spite of the vivid red wall) but focused his space into a corner where the story could begin in its sordid detail. The Palazzo Farnese of the second act took place not in a grand room of state but in a messy, lesser room, once again in a corner perspective for intimacy. The palace’s Renaissance grandeur was marred by the detail of an art nouveau facade of a shadow box side-room (yes, the torture room!). The upward swirl of the Sant-Angelo fortress was topped by its sword-bearing Bernini-esque statue (brutal Renaissance art works were a visual focal point in each act).
The Bernini statue however hid our view of a presumed Tosca leap from the heights of the fortress — the final abnegation of the Tosca ritual that had been enacted 175 times on the War Memorial stage over the past 95 years. Tosca herself of this iconic operatic ritual is a diva, and we’ve seen absolutely every great Tosca of opera’s golden era (except Maria Callas who canceled) leap the thirty feet from the top of the old Agnini/Bosquet set to the War Memorial floor. Until now.
Our current Tosca, Italian soprano Carmen Giannattasio is not a diva, rather she is a Roman soprano who has caught the fancy of a lusty Roman policeman, Scarpia, American baritone Scott Hendricks, who made the “hard pulse of his arousal” quite apparent. Cavaradossi, American tenor Brian Jagde, is a good-spirited painter who unfortunately is involved a bit in politics, and has a young friend, Angelotti who was beat up by partisan thugs. These were real people, made real, in fact, because they were excellent singers, and could be, possibly, exactly who they are. 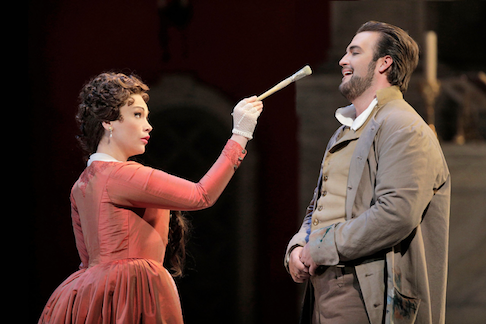 Carmen Giannattasio as Tosca, Brian Jagde as Cavaradossi
Of course it was Puccini’s Tosca and that too was always apparent, and this was the magic of the production. Tenor Jagde delivered his two arias with a delicacy of feeling and a mastery of Italianate technique that I did not know he possessed. Soprano Giannattasio gave her great aria supine on the stage floor, and scaled the many heights of the role with a convincing bel canto lyricism that comfortably rode Puccini’s verismo. Baritone Hendricks exposed his desire in true bel canto (say what you want but say it beautifully) and simultaneously convinced us of its urgency. Bass-baritone Hadleigh Adams’ Angelotti was sonorous, made even more operatic by his operatic limping (not always the same leg).
Further intelligence about the production: the voices of the boy acolytes of the first act were amplified by the voices of their mothers, perhaps present to protect the boys from predators (hardly Dale Travis’ ageless, sweet old sacristan). The first act question we always ask (just who is this Countess Attavanti?) was finally answered — she showed up at the end of Scarpia’s Te Deum, was abducted by Scarpia’s thugs, and reappeared looking a bit used when the second act curtain opened onto Scarpia’s office. Tosca did fortify herself with a gulp of wine after murdering Scarpia, placing but two candles by his lifeless body to the absolutely eery, creepy music rising from the pit. The faraway shepherds music of the third act was enacted by boys atop Sant’Angelo who cutely pretended to be soldiers executing one of their own.
We were gripped by the story, and satisfied by the singing. It was an auspicious debut of the Tosca set that we will see in countless editions, possibly throughout the remainder of this century. Catch it while it’s fresh.
Michael Milenski