The single ‘comic’ opera alongside the nine serious works that he wrote for
the Teatro San Carlo in Naples between 1815 and 1822, it was regarded by
the French poet ThÈophile Gautier as “a bottomless treasure, as if someone,
in a fit of extravagance, plunged their arms up to their elbows into a pile
of precious stones and then randomly started to throw handfuls of rubies
and diamonds up into the air”. However, others lamented Rossini’s
subversion of sentimental comic convention. Stendhal, after attending
performances in Milan and, two years late, in Rome, expressed his
dissatisfaction: “performance after performance left me cold and unmoved,
beautiful as it is, [the music] seems to me to be lacking in some essential
quality of ideal beauty.”

Above all, Stendhal lamented what he felt was the absence of ‘true’,
elevating emotion in the portrayal of the characters of humble origin.
Jacopo Ferretti’s libretto places the well-known fairy tale in a bourgeois
context. Out with the fairy godmother and in with a charitable
philosopher-cum-tutor who wishes to see his princely charge marry a ‘good’,
honest lass. Out with the cruel step-mother and in with a socially and
financially grasping step-father, Don Magnifico. Out with the glass slipper
and in with a glittery bangle, a simple gift from the disguised Prince
Ramiro which confirms Cinders’ lack of snootiness and avarice. Stendhal
complained that Rossini’s score illuminated nothing but “the petty hurts
and pettier triumphs of snobbishness”. 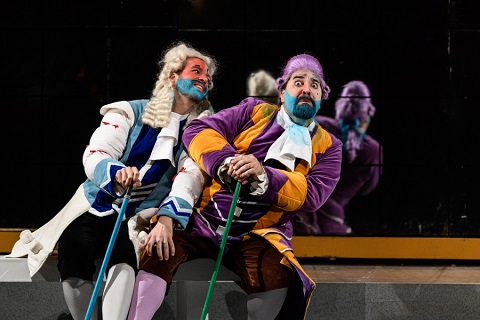 Director Joan Font’s production – first performed by Welsh National Opera
in 2007 – tries to resurrect some of the transformative magic of Alice’s
Wonderland … by making a trip to Poundland. Designer Joan GuillÈn’s sets
and costumes are bold and brassy: all plastic and plasticine and primary
hues. Font and his Barcelona-based company Comediants have often exploited Mediterranean carnivalesque, and one might wonder
if Font’s conception was influenced by Gautier’s praise: “Looking again at
the music one sees how, just like playing the castanets, a sparkling line
of trills and arpeggios blossoms forth. The music sings and laughs!” For,
Font conjures the eighteenth-century Enlightenment through the vitality of
a Spanish palette and the hyperbole of cartoon caricature. 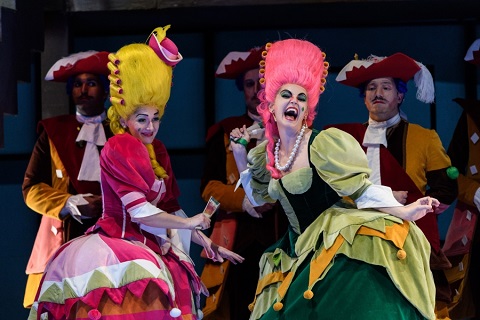 The mundane, magical and plain mischievous co-exist. Cinders goes to the
ball in a sedan chair which her rodent ‘courtiers’ and carpenters have
assembled from a shabby chest of drawers; the Prince’s coach is magicked
into being by some rotating mirrors … but later its miniature model is
derailed by a roguish rat. Font puts the panto back into a period piece
which had itself embodied the tension between ‘pure’ sentimentality and
sensibility as hijacked by middle-class social climbers, but in so doing
takes away much of the genuine enchantment of Rossini’s music as visual
gags overpower vocal expression.

To some extent, though, this production was defeated by the size of
Southampton’s Mayflower Theatre; when it opened in 1928 it was the
largest theatre in the south of England, and still seats almost 2,300.
GuillÈn’s designs seem to carry the cast to the far reaches of the vast
stage; when atop the raised balcony at the rear, descending the framing
stairs, or nestled within the grey-brick inglenook – especially when the
mantle was raised to reveal the grand entrance to the Prince’s palace – the
soloists sometimes struggled to project.

Likewise, in this barn of an auditorium conductor Tom·ö Hanus struggled at
times to keep the ensemble forces together. Proceedings got underway with a
somewhat sluggish, desultory overture, with some questionable tuning from
horns and wind, and rather listless Rossinian crescendos which were aching
for an injection of ‘Formula-1’ acceleration. The patter of Don Magnifico’s
first aria – sung briskly and ebulliently by Matteo Macchioni – in which he
curses his daughters for waking him from his dream of being turned into a
donkey – left the WNO Orchestra trailing in his wake. But, subsequently,
Hanus put his foot on the pedal and left the Prince’s courtiers lagging
behind. The ensembles were often metrically messy and occasionally in
danger of skidding of the circuit. Perhaps it did not help that the laughs
came from the visual trappings rather than from the dramatic interaction of
the cast who were often left languishing in theatrical isolation in the
ensemble numbers. 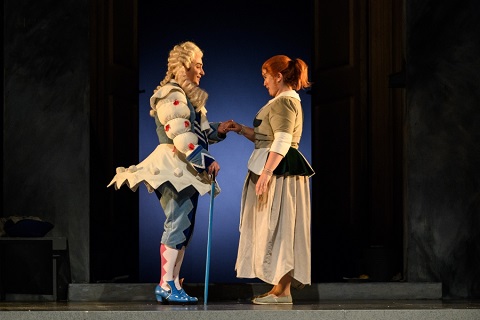 That said, some superb singing offered much to admire. Don Magnifico might
come across as a mean-spirited materialist but Fabio Capitanucci gave him a
patina, at least, of lovability – and demonstrated a fine technique and
good dramatic judgement. As Clorinde and Tisbe, Aoife Miskelly and Heather
Low established their respective characters well at the start – much
poncing, preening and ‘prettifying’ – and despite the parody which infects
their song, and the brittleness of their boasting and bullying, they never
sounded shrill.

As the human philosopher, Alidoro, Wojtek Gierlach – denied a magic wand
but cloaked in a star-spangled cape – was a sonorous Prospero-cum-Sarastro,
and if he didn’t quite attain a spiritual stature then he sang with beauty
and authority.

Prince Ramiro was neatly sung by Matteo Macchioni; his tenor has brightness
if not real bloom, and he presented a charming characterisation of a man
who is more an emblem than an embodiment of royalty, and who doesn’t really
find his ‘self’ until he’s wearing someone else’s suit. 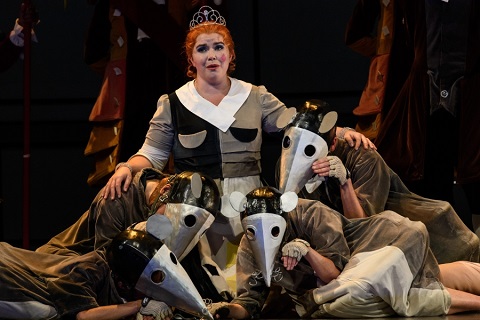 Wearing the figurative crown though, appropriately, was Tara Erraught, who
somehow imbued Cinderella’s lovely first aria, ‘Una volta c’era un re’,
with sadness, longing, and hope, simultaneously. She was both of this world
– down-to-earth and without illusion – and innocently unworldly. Vocally,
her line was pure and controlled; the coloratura clean and clear; the
pristine, polished evenness and sparkle of her tone heart-winning. No
wonder the Prince was smitten. A pragmatist rather than a Prince hunter,
this Cinders did not let good fortune tarnish her innocence or dull her
natural glow of goodness.

Cinders’ helpmate-rodents – ever-present, ever-twitching – both stole the
show and kept it on the road: observing and facilitating, overseeing and
fixing. But, when the loudest applause is generated by the balletic
unrolling of the red carpet by a pair of rats, something must surely be
amiss. But if, like Stendhal, one missed a certain nobility of feeling,
then at least, and luckily for the rats, there was no Cheshire Cat lurking
in the inglenook.