Maybe you’ve seen the 1946 film It’s a Wonderful Life. It seems many of you have, maybe most of you, and it seems that Jake Heggie and San Francisco Opera know you are yearning to return to that simpler time when the housing crisis was easily solved by simple community economics, big government was no where to be seen or felt, and winged Christian angels, like the one once atop your Christmas tree, watched over you. And, well (there can be no doubt), you are Christians and that prayers actually worked.
Though you once might have dreamt about college and a larger world, the world of Bedford Falls, NY is already pretty big in itself, or big enough to satisfy the ambitions of a good husband and father and citizen. When an outside evil intrudes (the “yellow peril”) you hold a spine-chilling rally to “Make America Great” again. 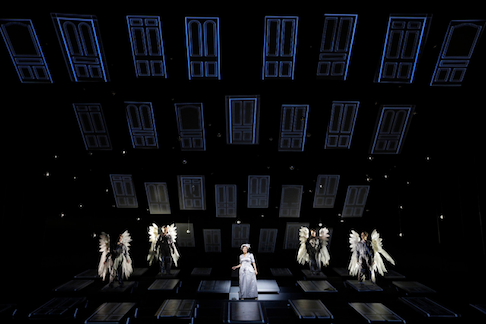 Set design by Robert Brill, costume design by David C. Woolard
Mr. Heggie and Mr. Scheer’s It’s a Wonderful Life is a tight (it enjoyed a gestation period in Bloomington and Houston before arriving at the War Memorial), beautifully crafted opera that tells its story in high operatic terms — it is a string of lyric moments woven into compelling, if trivial episodes that propel us to a final crisis that even the opera’s hero, George Bailey of Bedford Falls, NY learns is trivial — that it’s not worth killing yourself over $8000 ($111,000 in today’s dollars).
Mr. Scheer proved himself a brilliant librettist in his masterful adaptation of the Great American Novel Moby Dick for composer Heggie. Jake Heggie himself now has resolutely proven himself the Great American Composer with It’s a Wonderful Life, following Moby Dick and Dead Man Walking, works that embody the American spirit in flowing, intensely lyrical, American middle high-art musical terms. In It’s a Wonderful Life Mr. Heggie exploits the richness of American vaudeville, and dwells incessantly on the mannerisms of the American musical as well. Startlingly the opera begins with an ear-splitting imitation of the primitive sound of postwar movie theater amplification.
The opera’s coup de thÈatre is the moment George Bailey understands that if he had never existed there would be no music. It becomes a spooky, spoken world that makes us encourage George to quickly get back to the world of everyday problems that you can easily sing about — eschewing, of course, any whiff of the psycho-sexual violence that is the meat of real opera.
But wait. There was a second coup de thÈ‚tre and that was an urge to sing “Auld Lang Sang” that gripped us all when George at last hugged his wife and kids standing before a brilliantly lighted Christmas tree under the loving gaze of his suspended Guardian Angel. Well, we all belted it out with the maestro before leaping to our feet to salute the very fine artists and the excellent production.
Orchestrally It’s a Wonderful Life is scored for single winds (except two horns) and strings making it easily accessible for smaller holiday productions in regional theaters. On the other hand there can be no doubt that It’s a Wonderful Life will find international success in theaters throughout the world as a throbbing example of Americana.
Though of great sophistication the production by Leonard Foglia and Robert Brill was quite simple — a unit set of countless, identical floating panels that were doors, maybe tombs, other times wallpapered panels, floors, clouds that were heaven, streets, etc. The angels in heaven were breathtakingly flown in from the celestial spheres of the War Memorial fly loft. Costuming was the period of the film (1946).
There was considerable choreography, some maybe expertly fronted by dancers of the San Francisco Opera Ballet, but mostly executed by the principals together with 28 members of the San Francisco Opera Chorus, presumably chosen for their lithe bodies to fit the costumes of students of Bedford Falls High School and then the not-too-well-fed Irish and Italian immigrants that lived on the other side of the tracks. 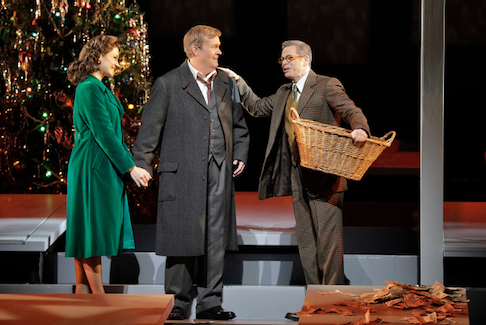 Andriana Chuchman as Mary Hatch, William Burden as George Bailey, Keith Jameson as Uncle Billy Bailey
The casting for the production made its bow to multi-culturalism by casting George Bailey’s guardian angel Clara [as in The Nutcracker] with the South African soprano Golda Schultz who set the standard for the high-level vocal performances that characterized the evening. American baritone William Burden successfully embodied the young George Bailey to then become the distraught middle aged banker and the loving husband. Canadian soprano Andriana Chuchman brought force and beauty of voice to create George’s emotional anchor, his wife Mary Hatch (who did escape to New York but came right back to Bedford Falls to create a home for George).
Confined to a wheelchair as the crooked businessman Mr. Potter, Los Angeles bass-baritone Rod Gilfry exuded greed and selfishness, his wheelchair coldly and calculatedly guided by the production’s one supernumerary. George’s brother Harry who does go off to college was sung by Canadian baritone Joshua Hopkins with vibrant presence. Genuinely batty Uncle Billy was aptly played by Keith Jameson, and George’s mother found big prominence as sung by San Francisco mezzo soprano Catherine Cook.
There are 34 named roles in It’s a Wonderful Life. Of the principals identified above Mr. Burden, Mr. Gilfry and Mr. Hopkins survive from the Houston cast. Conductor Patrick Summers from the Houston Opera ably helped the singers carve out their roles, evoking suitable orchestral pizazz.
Disclaimer: I have not seen the Frank Capra film, It’s a Wonderful Life.
Wise opera goers could pay $10 for standing room for the brief 2 1/2 hours that fly by fairly quickly, though you may wish to suggest a few economies to Mr. Heggie.
Michael Milenski